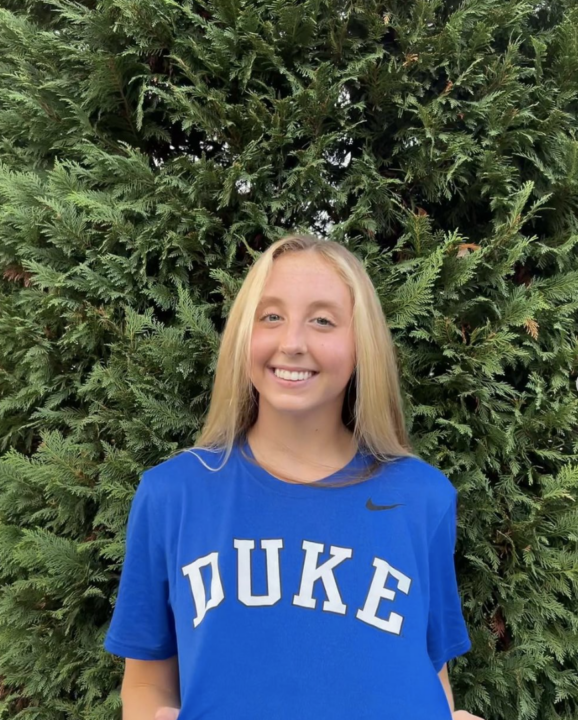 Y-Nats champion Clare Logan has announced her verbal commitment to the Duke Blue Devils, beginning in the fall of 2024. Logan trains year-round with Fanwood Scotch Plains YMCA, and attends Westfield High School in Westfield, New Jersey. She announced her commitment on Instagram:

Logan is ranked #16 on SwimSwam’s “Way Too Early Recruit Ranks” for the class of 2024. She specializes in sprint freestyle and, more recently, sprint backstroke.

Duke placed 5th at last season’s ACC Championships and 24th at last season’s NCAA Championships. Although Logan’s best times are outside of what it took to qualify for NCAAs last season, she should be an immediate impact swimmer for the Blue Devils at the conference level. Her best time in the 100 back would have put her just inside the B-final at last year’s ACCs, while her best 100 free would have put her just outside the A-final.  Sprint freestyle was one the weakest events for Duke at last year’s conference meet–they only scored 6 points in the 50 free and 7 points in the 100 free. The 100 back, however, was one of their stronger events, where they pulled in 40 points.

Duke’s backstroke group was led last year by Emma Shuppert (52.61), Easop Lee (52.99), and Shayna Hollander (52.90). Lee was the squad’s highest finisher at ACCs, earning 15th. Logan would have been the team’s fastest 100 freestyler last year, as Hollander held the top time at 49.34. Although that group will have turned over by the time Logan arrives, she should overlap with current sophomore McKKaeenna Smith, who went 22.65 and 49.71 last season.

The Blue Devils have been building some recruiting momentum in the past few years. Their freshman class this year ranked #7 on SwimSwam’s 2022 NCAA Recruiting Class Rankings. This class features #15 ranked Kaelyn Gridley, #19 Martina Peroni, and sprinter Tatum Wall. Wall should be a good training partner for Logan, with best times of 22.5 and 49.5 in the 50 and 100 freestyle.