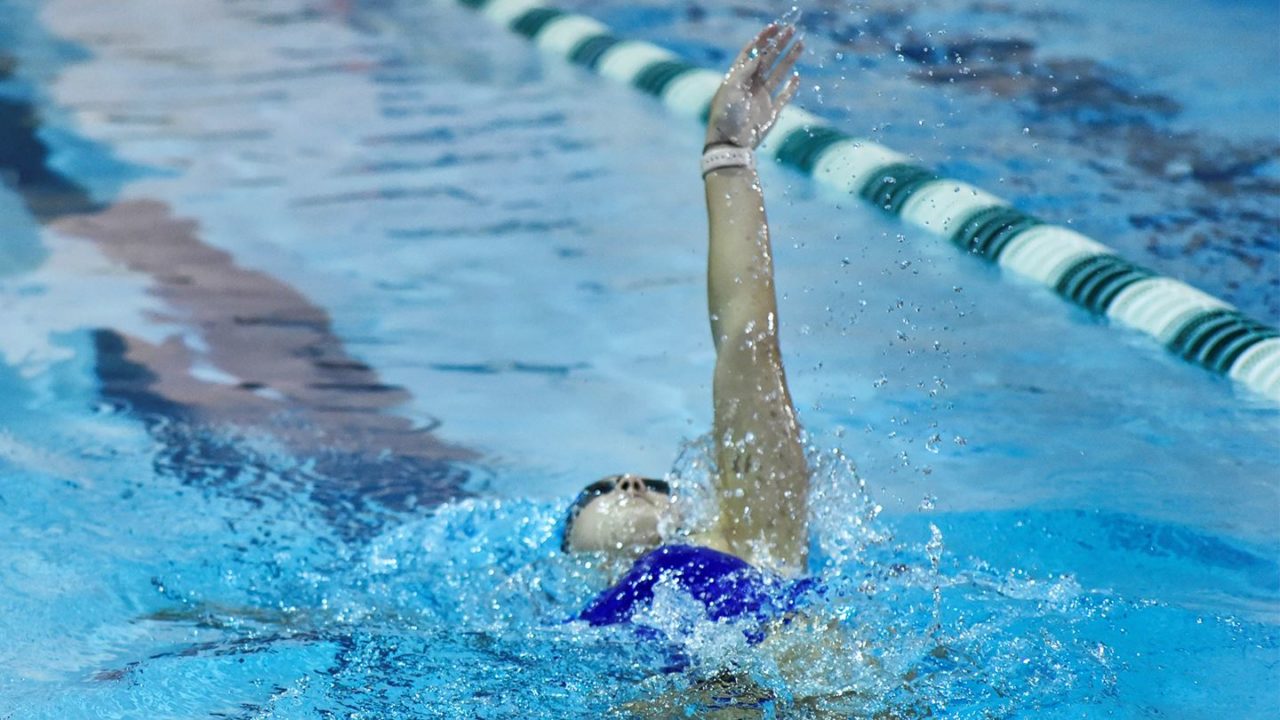 The UNC-Wilmington led wire-to-wire, while the Drexel women triumphed over FAU to both win the Patriot Invite in Fairfax, Virginia. Current photo via Joe Browning, UNCWsports.com

FAIRFAX, Va. – Behind 14 more top-10 results on Saturday the Drexel women’s swimming and diving team won the 2019 Patriot Invitational in a runaway. The Dragons completed the three-day event with 850 points – 77.5 more than second place and a whopping 220 more than third place.

Alexa Kutch took gold in the 200 back with a ‘B’ qualifying time of one minute, 56.91 seconds. Alicia Diaz followed behind in second at 1:59.39. Alex Temple also placed eighth in the event.

Megan Sicinski hit her ‘B’ cut in a silver effort in the 200 breast. She touched the wall in 2:14.64, the second-fastest mark in program history. Gabrielle Rudy finished in a close third at 2:14.77, the third-fastest time in team record books.

Lera Nasedkina led three Dragons in the top eight of the 100 free. Nasedkina placed second at 50.58, the second-best time in team history. Ryann Styer and Diaz finished back-to-back in seventh and eighth, respectively.

The Dragons closed out the event with fourth- and fifth-place finishes in the 400 free relay.

Drexel competes at the U.S. Open Championships in Atlanta Dec. 4-7 to close out its 2019 slate.

FAIRFAX, Va. – UNCW’s men’s team led wire-to-wire to win the Patriot Invitational on Saturday while the women’s program continued it record-setting ways at the McKay Natatorium.

The Seahawks cruised to the men’s meet title, posting a 50-point win over Florida Atlantic. On the women’s side, Drexel took first followed by FAU and the Seahawks in second and third, respectively.

UNCW’s men’s team held off a hard-charging FAU squad to claim the championship. The Seahawks’ best individual finish was Josh Rigsbee’s third-place finish in the 200 Breaststroke. In the final race of the meet, UNCW finished second.

For the women, a pair of meet records were set by the Seahawks as well as a program freshman mark.

Junior Evan Arsenault captured the 100 Freestyle with a time of 49.54 seconds after swimming an identical time in the preliminaries earlier in the day.

Freshman Mary Grace Copeland, meanwhile, finished fourth in the 200 Backstroke with a UNCW freshman record time of 2:00.08, besting the previous time of 2:00.57 set by Hannah Stephenson in 2012.

Rounding out the record-breaking performances for UNCW was the 400 Free Relay of Faith Pilcher, Sarah Olson, Hannah Copeland and Arsenault. The quartet combined to fashion a winning time of 3:24.31.

The Seahawks return to the pool next on January 11 when they host Davidson in the final home meet of the season.

It seems that from the articles there were only two teams at the meet except for the scores. There were some very good swims in the meet that went unmentioned. Rateb Hussein from FAU went 1:45.74 in the 200 fly and 47.31 in the 100 fly, Spence Atkins, also from FAU, went 1:59.82 in the 200 fly, Ilya Rattsev from UMBC went 20.25 unsuited in the 50. The men’s 100 free final was a great race with 4 under 45 and a splash for the finish. These one-sided reports from the winners’ websites are very misleading and don’t really give a good idea of how the meet was in terms of competition. Granted, this is a mid-tier Division I invitational… Read more »