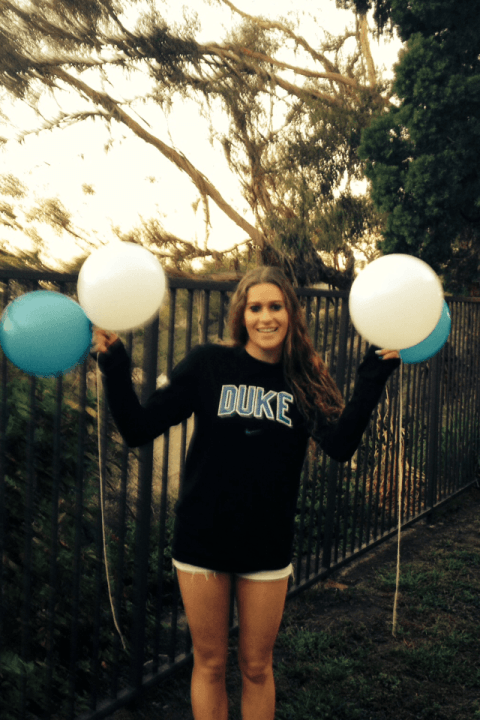 Duke received another verbal commitment this week from a distance freestyler. Last night we reported that Lexy Aitchison verbally committed, and tonight we are happy to announce that Brittany Kahn from Aquazot Swim Club has also verbally committed to join the Blue Devils next fall.

Brittany will contribute to the program with her best times of 16:21.12 in the 1650 freestyle and 4:52.35 in the 500 freestyle. She will walk into the program with a 1650 time that is almost identical to Aitchisons. The next fastest distance swimmer on the team last year posted a season best time of 16:55. It is clear that Duke is trying to move in a new direction with the class of 2015. They have not had an All-American freestyler since Ashley Twitchell graduated from the program in 2009.

It should be very exciting to watch Kahn and Aitchison train together for the distance freestyle races. Both swimmers already have the NCAA B cut times with a whole season to go before they begin their college careers.

Duke’s top 500 freestyler last season, Lindsay Schlichte, posted a season best time of 4:52.35 in the 500 freestyle last year.  Kahn’s best is already a few tenths under the team’s top time from last season. Her shorter freestyle events are not as strong as her distance events, but she still may be a relay contributor with her times of 1:51.10 in the 200 freestyle and 52.59 in the 100 freestyle.

“I chose Duke because I absolutely loved the team and the coaches, and I am so excited to join their Blue Devil family!”

What an incredibly eloquent and mature young lady. You always brighten my day with your smile. Clearly Duke is very lucky to have you. I sincerely wish you the best of luck in your college swimming career!!