Diana Nyad to attempt Cuba to Florida swim again at 62 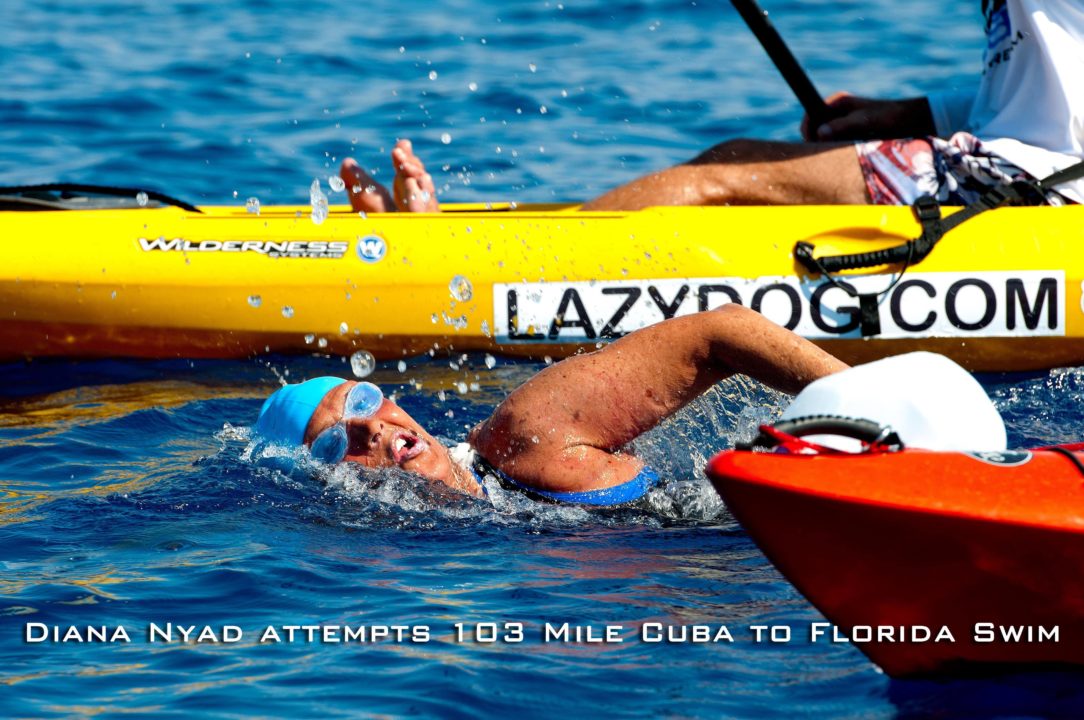 Diana Nyad is at it again. (Photo Courtesy: Mike Lewis/OlaVistaPhotography.com)

As reported by CNN and Diana Nyad’s blog – the famed 62-year-old swimmer will attempt to swim 103 miles between Cuba and Florida on Sunday.   I was honored to be an official observer last September when Diana made her second attempt of the 2011 summer only to thwarted by multiple debilitating jelly fish sting after 30 hours of swimming.   During that swim Diana displayed a strength and determination that is laudable for an athlete of any age – but when you consider the fact that she was 61 years of age her accomplishment was phenomenal.   Although each stroke she took during those 30 hours of swimming was remarkable, her quick recovery and astute insight on the boat ride back to Key West is what was truly impressive.   Diana Nyad is a very strong woman who continues to inspire with her efforts.   Over the last year she resumed an impressive training regimen and worked with swim suit manufacture FINIS to develop a suit that is can project against the jelly fish yet still have her swim fall into the “unassisted” category (a somewhat contentious point amongst some marathon swimming enthusiasts).  She has assembled a top notched crew of experts to support this endeavor with the hope that 2012 is the year she realizes what is called the “XtremeDream”.   The 103 mile swim is expect to take at least 60 hours of continuous swimming.   It will be exciting to follow her progress.  Her team will be likely reporting on Twitter (@diananyad) and on her blog.

Corrected 8/20 – the term “channel swimming federation” was correctly pointed out as being too ambiguous and that the suit would not adhere to certain federation guidelines such as the English Channel Swimming Federation.

Thank you “Shinji” – please note the edit and the notations added. Keep on swimming!

Did the jellyfish demand her respect?

I can see trying to swim the English Channel or something similar, but 103 miles does not make sense unless you are built like a fish and can swim 25 mph.

I’ll be very surprised if she makes it. Good luck Diana, you’re going to need a ton of it.

According to reports on Diana’s blog (diananyad.com) she has left early and is now underway.

“whoknows”- must be angry at something in their life- why would anyone feel compelled to make a negative comment about her attempting her dream goal again? Who cares how many times she attempts it? It is her personal goal and she sticks with it- that determination is what I admire in anyone. I have no respect for anyone that can only mock or make negative comments, I just pity them. Go Diana- keep chasing your dreams!

This is defnitely her last attempt – she has said that at least three times in about the last year! Anything to maintain the attention she wants so badly. Never forget Nyad!

She doesn’t seem all that driven by attention to me. She’s been pretty low-key over the decades, especially about her personal life. She’s been relatively quiet about being gay, which could have brought her all the attention she wanted, as well as some of the other work and things she’s done. She just seems like one of those completely obsessed champions to me. I hope she makes it; it’s always great to see champions pushing the limits.

Liquidassets, I completely agree. If somebody is aiming for attention, there are probably more effective ways to garner it than doing an open water swim. I have nothing but respect for this fine lady. Her drive is admirable, and I wish her the best of luck….

“Whoknows”….. Bitter much? Unless you know Ms. Nyad personally, then this is the only other reason you might make such a statement.

She does not know when to quit. I’m impressed by her insanity.