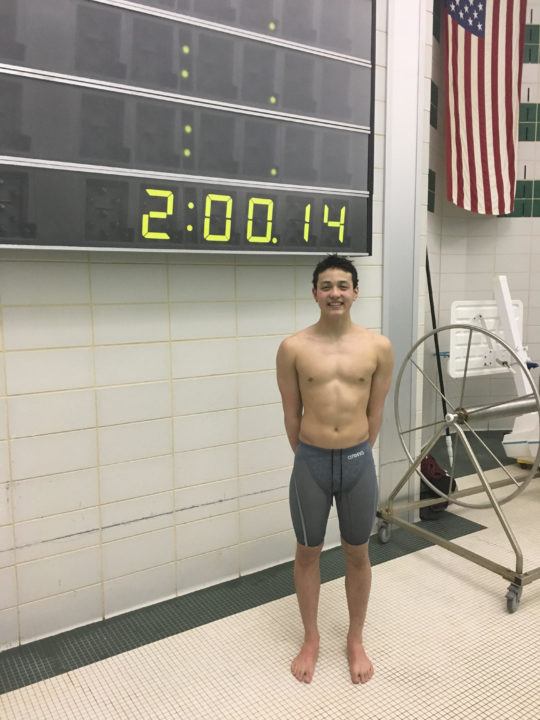 16 year-old Destin Lasco of Pleasantville Aquatics set a new National Age Group record in the 100 yard backstroke tonight at the Middle Atlantic Senior Championships in York, PA.  Lasco’s time of 45.93 broke the previous record of 46.65, set by Michael Thomas back in 2014.

Note: the YouTube video says that Lasco’s time was a 46.93, but a photograph we received of the official results, as well as Meet Mobile, confirm that the time was a 45.93.

Lasco went out just a bit under Thomas’s record pace, but really hammered it on the home on the back half of the race, where he was over six-tenths of a second faster.  Thomas was our #3 recruit in the high school boys class of 2015, and he just wrapped up his junior season for the California Golden Bears, who he helped lead to a 2nd-place finishing at last week’s NCAA Championships.

Lasco’s 100 back time tonight not only would’ve qualified him for the men’s NCAA Division I championships, but it actually would’ve put him tied for 16th in prelims, making Lasco one of the rare 16 year-old boys who already has NCAA scoring times.

Great swim by a great kid! Way to keep the record in Mid-Atlantic swimming.

At NCAAs, only 8 swimmers came home faster, and only one swimmer came home under 23 (Coleman Stewart 22.97).

Yea, must be some other race

0
0
Reply
Swimmer A
Reply to  sven

Honestly, still not a bad time

Depending on which race and age.

Hey man, you don’t have to bring race into this