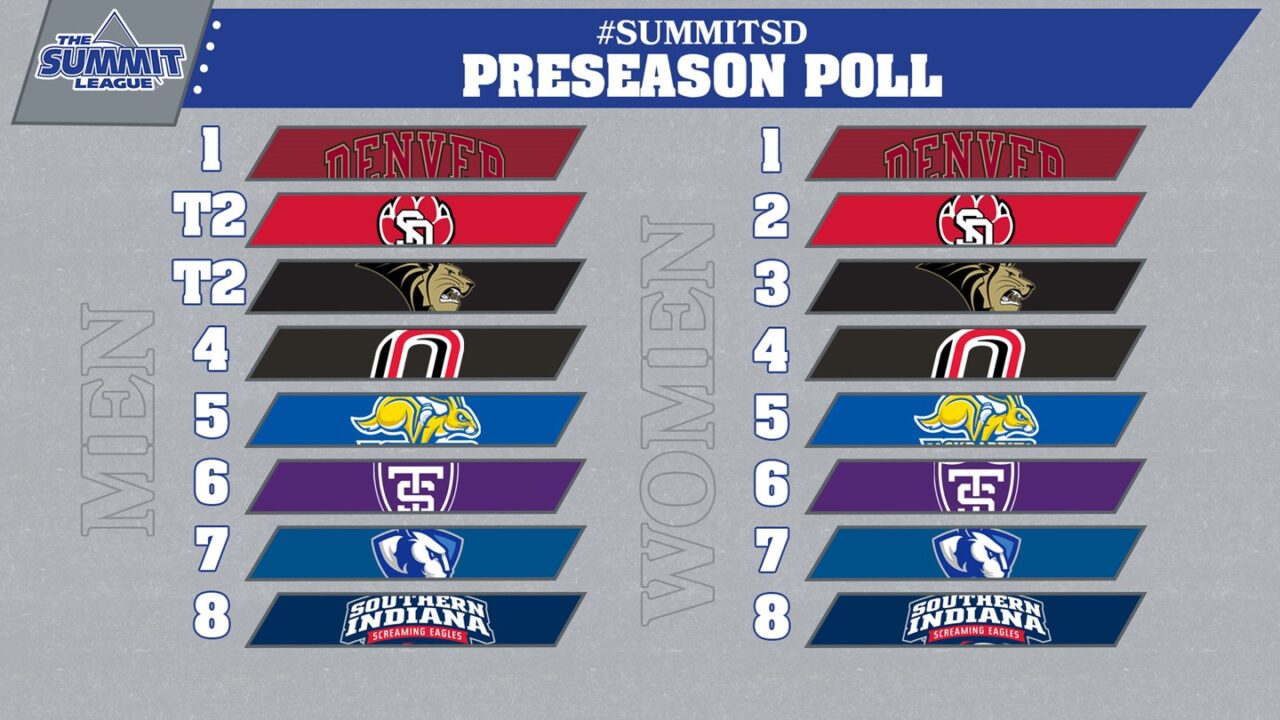 The Pioneers topped both preseason polls released Wednesday by the league office.

SIOUX FALLS, S.D. – The Denver Pioneers were chosen to win both the Summit League Men’s and Women’s Swimming and Diving Championships as the Pioneers topped both preseason polls released Wednesday by the league office.

The Pioneer men, who captured their eighth #SummitSD title in nine years a season ago, collected six first-place votes, garnering 48 points. South Dakota and one of the league’s two newcomers, Lindenwood, each received one first-place vote and were tabbed to share second with 38 points.

Omaha, who made its debut season on the men’s side last season, was slated to finish fourth with 30 points. Just behind the Mavericks with 28 points was South Dakota State, who was picked to finish fifth. St. Thomas followed the Jackrabbits in sixth with 19 points, while Eastern Illinois was tabbed seventh with 14 points. Southern Indiana, who joins Lindenwood as a league newcomer, rounded out the poll in eighth with nine points.

On the women’s side, Denver, who received 49 points, collected all seven of their possible first-place votes and were followed by South Dakota with 38 points. Lindenwood was just behind the Coyotes in third, tallying 35 points. Omaha followed the Lions in fourth with 33 points, while South Dakota State was tabbed fifth with 26 points. St. Thomas (20 points) and Eastern Illinois (14 points) was slated to finish sixth and seventh, respectively, while Southern Indiana rounded out the poll in eighth with nine points.

Lindenwood and Southern Indiana both join the Summit League this season as affiliate members in the sport as they begin their respective transitions from the Division II level. The Lions finished fifth (1,139 pts) in the men’s Great Lakes Valley Conference in 2022, while the women finish third (1,616 pts) in last season’s conference championship meet. Southern Indiana is fielding men’s and women’s swimming and diving teams for the first time in department history.

Jaden Cardona – Freshman | Diver | Lake Stevens, Wash.
• A three-time state meet placer in the 1-meter springboard
• Washington State runner-up in Class 4A as a senior after finished 11th as freshman and fifth as a sophomore
• Holds school record of 484.70 and competed three times at the USA Diving nationals

Ian Blackstock – Sophomore | Diver | East China, Mich.
• Posted a season-best score of 251.78 in the 1-meter against Northern Iowa and a score of 268.55 in the 3-meter at the League Championship
• Registered program’s top four scores in the 3-meter last season

Zach Boyd – Senior | Diver | Omaha, Neb.
• Earned fifth-place finishes in the 1-meter and 3-meter diving competitions at last season’s League Championships
• Swept the diving events in a dual action at USD, posting winning scores of 286.35 in the 3-meter and 260.50 in the 1-meter
• Was named the men’s diver of the week twice last season

Stella Fairbanks – Junior | Dive | Highland, Mich.
• Named the 2021-22 Summit League Women’s Diver of the Year following a win in the one-meter event (281.45) and a runner-up in the three-meter competition (289.80), qualifying for the NCAA Zone Diving Championships
• Was named the #SummitSD Diver of the Week five times this season and has been named the diver of the week 10 times in her first two seasons as a Coyote

Elle Christie – Senior | Dive | Baldwin, Mo.
• Coming off an injury after winning multiple events throughout last season
• Placed first in the 100 back (1:05.65) at a dual meet against South Dakota
• Also helped record a first-place 400 Medley Relay time of 3:56.97 in another dual against USD, starting at the first leg

Aleni Stoakes – Senior | Dive | Lincoln, Neb.
• Earned first Summit League Diver of the Week award after posting scores of 200.78 on the 1-meter board and 181.57 in 3-meter competition at a season-opening dual at Nebraska
• Finished as runner-up in 3-meter diving and placed third on the 1-meter board at both the Augustana Invitational and Coyote Invite

Allison An – Senior | Dive | Owatonna, Minn.
• Finished with an eighth place performance in the 3-meter five (225.35) at the League Championships
• Tallied first in the 1-meter against Augustana and Green Bay

Eastern Illinois
Camryn Lewis – Junior | Free | Kennesaw, Ga.
• Placed fourth in the 50 free at the #SummitSD Championships with a school record time of 23.14
• Swam on the 200 Free Relay that posted a time of 1:36.80, which ranks fifth in the EIU record books
• Added three first-place finishes during the season twice winning the 50 free and once in the 100 free

Kennedy Darensbourg – Junior | Free | Fredericksburg, Va.
• Posted season best times in the 200 free and 500 free and the league championship
• Had three first-place finishes during last season and won once in the 500 free along with twice in the 1000 free

Amazing how far Denver has fallen since the days of Loncar, Farber, and Auchinachie.