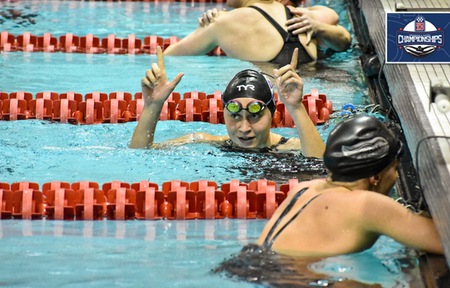 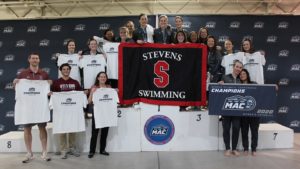 GRANVILLE, OH — The Denison men and women currently lead the team standings following the second full day of competition at the 2020 NCAC Swimming & Diving Championships at the Trumbull Aquatics Center on the campus of Denison University. The Big Red men won two events on night two to move into first place with 598 points, while the women won two individual titles and both relays to hold the lead in the team standings with 704 points.

To start the night off, the Denison men captured the 200-freestyle relay title and collected an NCAA “B” cut standard as sophomore Liam Picozzi (Ballston Spa, NY/Burnt Hills-Ballston Lake), senior Kymani Senior (Bronx, NY/Woodlands), freshman Trey Ike (Horseheads, NY/The Peddie School) and senior Matt McHugh (Charlottesville, VA/St. Anne’s Belfield) recorded a 1:18.78 finish, just one one-hundredth of a second off of tying the NCAC record. In the first individual event of the evening, Kenyon senior Connor Rumpit (Brookfield, WI/Brookfield Central) collected the 500 free title with an NCAC record and NCAA “B” cut time of 4:24.34, shaving more than four seconds off of his prelim time from earlier in the day. This was Rumpit’s third 500 free championship crown as he previously won the event in both 2017 and 2018. Kenyon sophomore Luis Weekes (St. Thomas, Barbados/Baylor School) earned his second-consecutive title in the 200-individual medley after touching the wall first with an NCAA “B” cut and NCAC-record time of 1:47.82. Denison then took over the lead in the men’s team standings with the top three finishers in the 50 freestyle with Ike touching the wall first in an NCAA “B” cut time of 20.10. The Kenyon men closed out the night with a first-place showing in the 400-medley relay to recapture the lead in the standings. The foursome of junior David Fitch (Conway, MA/Williston Northampton), Weekes, freshman Cheran De Silva (Colombo, Sri Lanka/Ananda) and sophomore Joe Black (Kingston, Jamaica/The Peddie School) touched the wall first in an NCAC record and NCAA “B” cut time of 3:12.50.

The Denison team of senior Gabriella Nutter (Johannesburg, South Africa/St. Mary’s School), junior Maddie Hopkins (Chico, CA/Chico), and seniors Casey Kirby (Long Grove, IL/Stevenson) and KT Kustritz (St. Paul, MN/St. Paul College) opened the women’s swimming action by winning the 200-freestyle relay with an NCAC record and NCAA “B” cut time of 1:30.98. Their time was half a second faster than the NCAC’s previous meet record of 1:31.28 that was set by the quartet last season. Kenyon senior Kendall Vanderhoof (Glenwood Springs, CO/Glenwood Springs) then climbed the podium in the first women’s individual event of the evening after recording an NCAA “B” cut time of 4:55.80 for her second-consecutive title in the 500 free. Kenyon junior Crile Hart (Pepper Pike, OH/Hawken School) reclaimed the NCAC crown in the 200 IM in record-setting fashion as she posted a time of 1:58.04, which not only surpassed the NCAC record but also earned her an NCAA “A” cut and the top time in the NCAA. Denison then saw Hopkins outreach the competition for the second-consecutive season in the 50 free with an NCAC-record and NCAA “B” cut time of 22.84. In the diving well, Denison senior Naomi Clayton (Lexington, KY/Sayre) captured the one-meter title with a regional-qualifying score of 426.05 points. Denison closed out night two topping the podium in the 400-medley relay with an NCAC record and NCAA “B” cut time. The Big Red relay team of senior Angela Le (Eagan, MN/Burnsville), Kustritz, Hopkins and Nutter finished in 3:40.48.