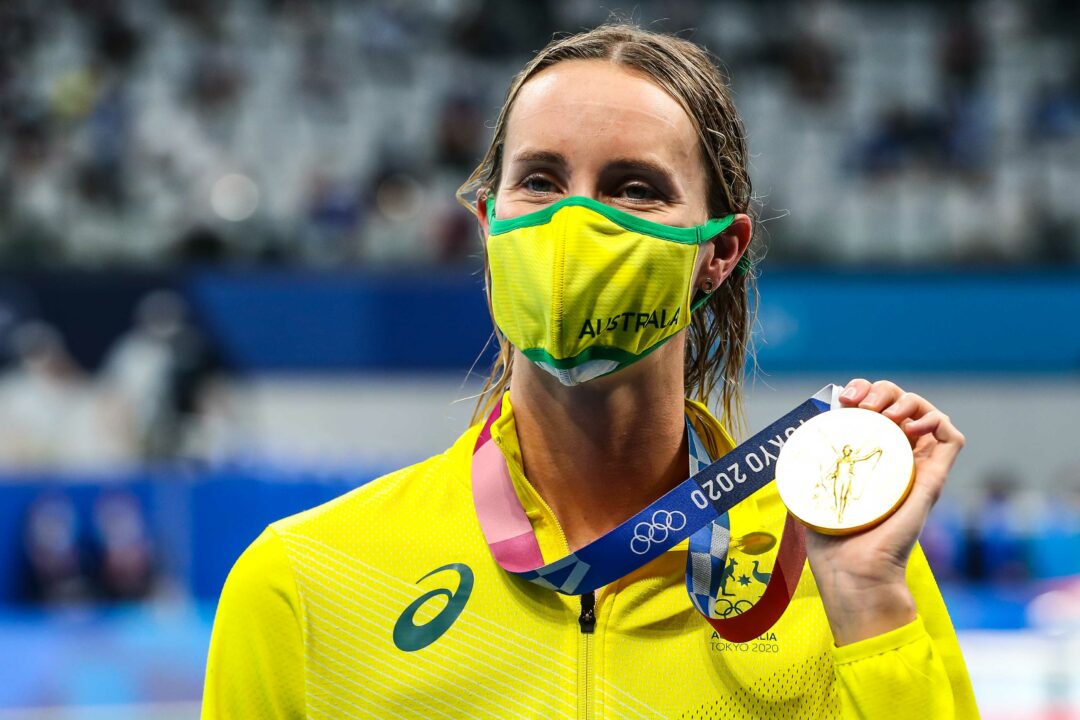 Emma McKeon, one of the stars of the Tokyo 2020 Olympic Games, will be a late regular season arrival to Season 3 of the ISL. Archive photo via Jack Spitser/Spitser Photography

London Roar general manager Rob Woodhouse said on the London Roar Podcast this week that he expects two of his Australian stars, Emma McKeon and Kyle Chalmers, to join the team for Week 3 of the 2021 International Swimming League Season.

Week 3 for the ISL is match 2 for the London roar, where they’ll face the defending league champion Cali Condors, the Tokyo Frog Kings, and the revitalized Aqua Centurions.

On the podcast, Woodhouse confirmed that three stars of the team won’t be participating in the regular season at all: Cate Campbell (#7 in 2019 MVP standings), Kirill Prigoda (#34 in 2020 MVP standings), and Tom Dean (Olympic champion in the 200 free). Campbell and Prigoda are both World Record holders.

Two others stars of the team won’t join the team until week 3, which is the Roar’s 2nd match. That includes one of the dominant faces from the Olympic Games and Woodhouse’s niece Emma McKeon, as well as Kyle Chalmers.

“Apart from that we’ve pretty much got a full team, a full roster, for Naples. There are a few people coming in late…Kyle Chalmers and also Emma McKeon are missing the first match, but they’re joining us…about 6 or 7 days late, so they’ll be there for the 2nd match.”

Woodhouse says that many of his team’s Australian swimmers (he is Australian and has more of them than any other team in the league) will wind up staying in Europe through the playoffs, which will be held in the Netherlands in November.

“The other Australians are staying right through the end of the playoffs in November and quite possibly will be training in the UK.”

Previously, the team had said they would be without Chalmers and McKeon for the regular season, and that they would have Dean and Prigoda.

There was a tease of being some chance of breaststroker Adam Peaty joining the team for the tail end of the season if he does particularly poorly in his appearance on the celebrity dance show that is occupying his autumn but didn’t sound too hopeful.

Teams that had an off-week bye in week 1 of the ISL season didn’t arrive in Naples until earlier this week in preparations for their season opener.

The team’s new head coach Steven Tigg also reveals on the podcast that he’ll be arriving late to Naples because of a prior commitment.

While many teams are delicately balancing the lack of stars this season, the Roar seem more precariously-placed than most. If they can hold on until the playoffs, however, and receive their reinforcements, they still have a chance of pushing through to the final.

In spite of the attempted ‘rebalancing’ of the league via the draft, there is still enough of an imbalance that the Roar, without 3 star swimmers and with 2 others arriving late, should still comfortably finish in the top 6 this season and avoid the ‘play-in’ match at the end of the regular season.

The most interesting matchup in Match 3, which begins at 7PM local time in Naples on Thursday, is the battle between London and Iron for 2nd place. The Breakers are the clear underdog in this one, and Energy Standard the clear favorites.

Listen to Woodhouse discuss his team’s roster for this season below:

Freya isn’t competing in match 1 either, probably because she said she’s had injuries and illnesses for the whole year (which is why she underperformed in Tokyo) and is probably just taking some time to recover.

Do any other ISL teams have podcasts as well?