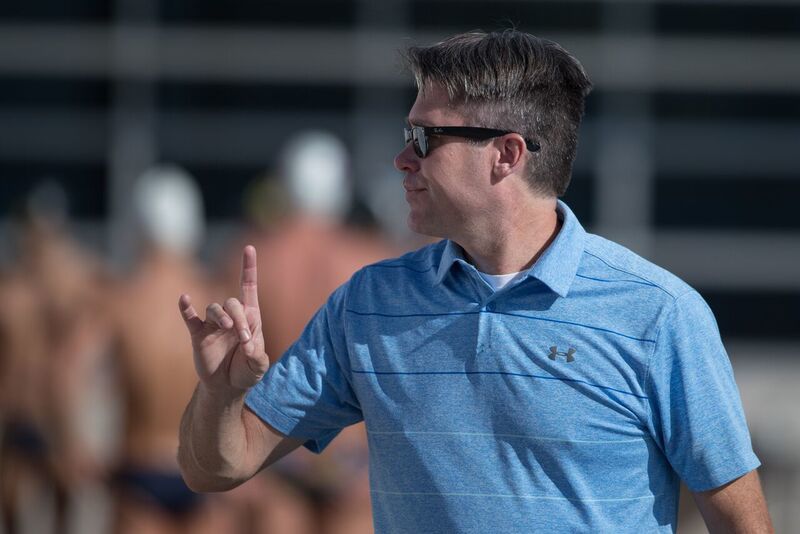 Durden has led the Cal men to 9-straight top 2 finishes at the NCAA Championships. Archive photo via “Rafael/Domeyko Photography”

Cal men’s head swimming & diving coach Dave Durden has signed a 3-year contract extension to remain the head coach in Berkeley, California. The extension will silence rumors that he might return to Auburn, where he was a long-time assistant during the program’s glory days, as head coach. His current contract at Cal was due to expire on April 30th. The contract is reported to have come with a significant raise from the $157 thousand base salary that he received in 2017 (which came to around $215,000 with bonuses).

Durden has been the head coach at Cal for 11 season and led last year’s team to a runner-up finish at the 2018 NCAA Championships. That continues a run of 9 consecutive seasons where Cal has finished 1st or 2nd at that meet, including titles in 2011, 2012, and 2014.

6 Cal swimmers he coached qualified for the 2016 Olympic Games where they won 11 medals, including 8 golds and a 100 back World Record from Ryan Murphy.

Prior to his arrival at Berkeley, Durden was the head coach at Maryland from 2005-2007 and an assistant at Auburn from 2002-2005, where the men’s and women’s teams combined for 6 NCAA team titles.

Durden will be looking for a new assistant coach this year to replace Yuri Suguiyama, who left to become the head coach at Wisconsin.

Great news for Cal, the college swimmers and pros there.

I was told and our coach Jake… With all of his performance bonuses this year made $325k.

Good for Dave. He has a great gig at Cal. Never in a moment did I think he would end up in a cow pasture in Alabama! Go Bears.

Damn, thought he was headed to George Washington 🙁

Curious to see how much he’ll be at now. Cal’s been investing in the swim programs for years now, so not surprised they opened up the wallet.

You had to believe CAL wasn’t going to let Yuri and DD walk at the same time. Sounds like a good extension for both sides.