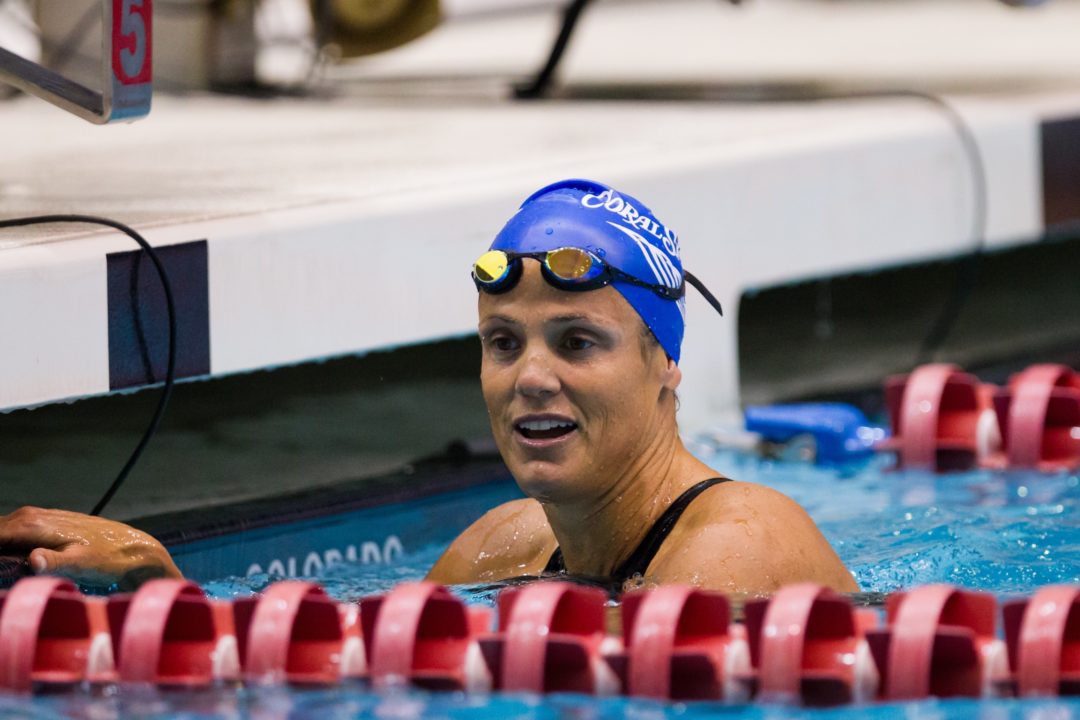 Most of the visiting college swimmers skipped-town before the final day of the Texas Senior Circuit Meet in College Station, but that didn’t diminish the excitement in the natatorium. That’s because the ageless Dara Torres was in the house for her final pre-Olympic tuneup.

Sticking to her schedule of only one race – the 50 free – Torres had a solid 25.43 to take the win; that time is right in the range she’s been swimming this year, just .07 off of where she was in Indy. We don’t know exactly where this leaves her headed into Trials, except that she tapered her way down to a 25.1 during the summer of 2011.

She was pushed in this race by a pair of other veterans – Venezuelan Arlene Semeco in 25.83 and SoFlo swimmer Jessie Alcaide 26.36.

The other hotly-anticipated swim was Cammile Adams’ 200 fly swim. She was the world-leader for the first 6 weeks of 2012 after a swim at the Austin Grand Prix. She wasn’t close to that swim here, with a 2:12.94, but still held on to her back-half fairly well and won easily.

The other big-name winner was Spindrift Beck in the women’s 200 IM in 2:18.44, which gives her an Olympic Trials cut in the race. Just like we saw in each of the breaststrokes, this is her best time in years. For example, the fastest she was in 2011 was only 2:32. Beck seems to finally be back in her rhythm.

Well, that’s the golden question: she will swim a sub-25 in Omaha, but is it going to be enough to make the team?

Additionally, is she really not swimming the 100 (for a relay spot)?

I really find it hard to believe that cammile wasnt tapered in austin. If she was supposidly just off of a training trip and went a 206, why cant she continue that at the rest of the in season meets?

John – I think we can now establish that there was at least a big rest, between her times in Austin and others (Breeja, for example), at that meet. I guess we’re going to find out whether it was just a big rest or a true taper – difference between a 2:06 and maybe a 2:05 at trials.

I doubt she was tapered. She was suited up and tracking down world championship finalists in Austin. You can’t say the same thing at College Station. While I doubt she was only going 3000 a workout right before Austin, she (and others) were probably feeling really good after a week of regular practice coming off a 2-3 week training camp. Bob Bowman does this for their NBAC December meet- pound them for 2 weeks, return to a “normal” week, and they swim lights out without compromising any training. And while I don’t believe she was tapered, a 2:06 is a 2:06. That’s one of the best times we have seen out of an American woman in the last few years-… Read more »

Completely agree with both statements- but her interview in austin gave the impression that she was still in heavy training and just wearing a fast suit.

I do think she is seriously in the hunt for an olympic berth in this event, and she could even be an olympic finalist. Im interested to see how jasmine tosky does in this, i think she is the darkhorse in many many races come omaha…if you look at her times posted on college swimming she doesnt have a weak stroke or event and its just phenomonal!!! She is the future…

Yes. He seems to be doing a great job.