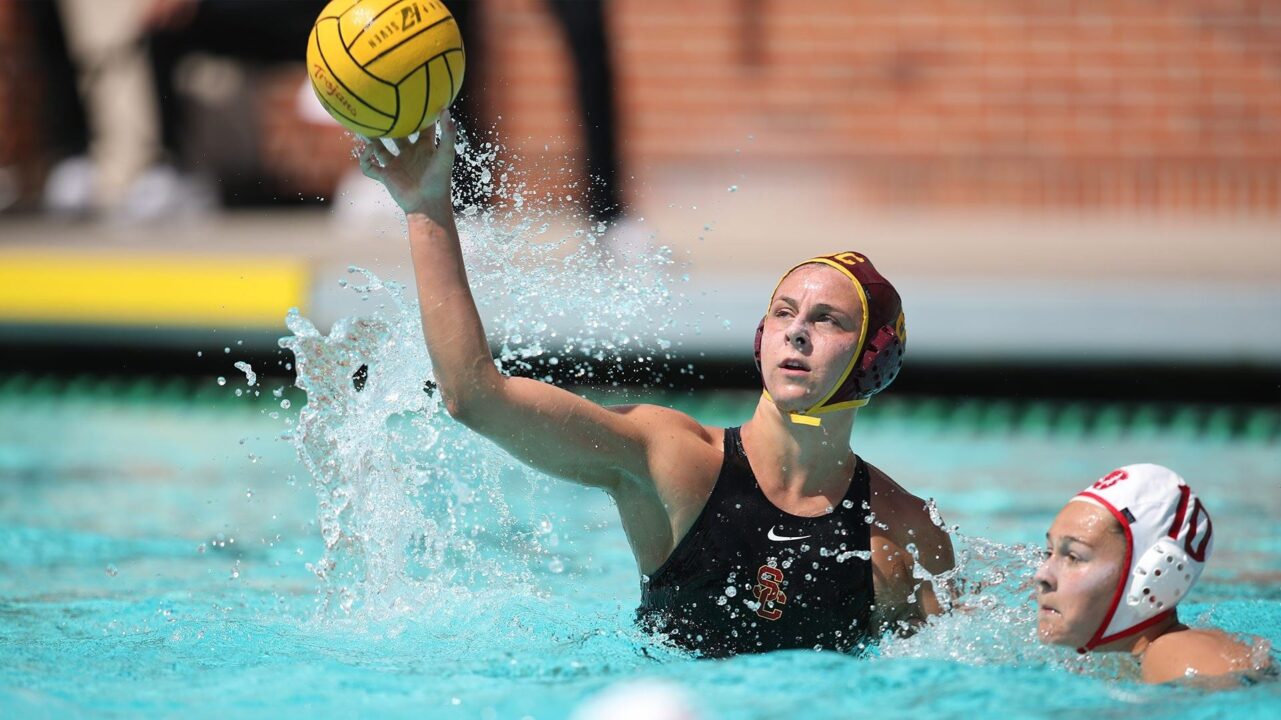 USC's Denise Mammolito (pictured) was among the finalists for the award that recognizes the best men's and women's players in the NCAA each year. Archive photo via Jenny Chuang

The Cutino Award ceremony will be remotely broadcast LIVE on Thursday, September 2 courtesy of USA Water Polo starting at 9pm EDT/6pm PDT. The broadcast, hosted by Greg Mescall, will feature interviews with finalists, athletes, coaches and a look ahead to the men’s college season plus the Cutino Award ceremony in its entirety. The broadcast will air free of charge at YouTube.com/USAWP and Facebook.com/USAWP.

Mercep, a senior driver from Dubrovnik, Croatia, helped lead USC to the NCAA Championship game. The three-time First Team All-American racked up 151 goals during his Trojans career, No. 11 on their all-time list. He opened his 2020-21 campaign with a seven-goal performance in a win against UCLA and continued to pepper opposing nets with 39 total goals on the season. Mercep was named to the NCAA All-Tournament First Team and MPSF All-Tournament Team this year, and earned an MPSF Player of the Week selection.

Saveljic, a senior attacker from Kotor, Montenegro, led UCLA to a national championship in 2020-21. He was named Association of Collegiate Water Polo Coaches (ACWPC) Player of the Year and earned First Team All-American honors. Saveljic led the Bruins and the MPSF and was second in the NCAA in scoring with 37 goals in 16 games (2.3 goals per game). He was also third in assists on the team (10) to finish as the overall leading scorer on the squad with 47 points. He also led the team, the MPSF, and the NCAA in steals with 30 on the year.

Papanikolaou, a sophomore center from Athens, Greece, led Cal to the NCAA Championship Tournament. He was a First Team All-American. Papanikolaou was named MPSF Player of the Year and First Team All-MPSF after finishing the season with 25 goals, 26 points and 14 steals, scoring in all 10 of the Bears’ regular season games and earning 44 ejections (15 penalty shots). He was the only player in the MPSF this season to draw six exclusions against a conference opponent, having done so twice.

Mammolito, a senior driver from Rancho Cucamonga, Calif., helped lead the Trojans to a national championship. The First Team All-American was USC’s top scorer with 51 goals.The fifth-year senior finished her USC career No. 10 all-time in scoring with 174 goals.

Megens, a senior utility player from Rotterdam, Netherlands earned ACWPC Player of the Year honors while helping the Trojans to a national championship. Megens is representing the Dutch national team at the Tokyo Games after scoring 50 goals for USC in 2021. She closed her career as the Trojans’ No. 6 all-time scorer with 213 goals. She also took home MPSF Player of the Year and MPSF Tournament MVP honors in 2021. Megens tallied six goals in the national championship game as USC prevailed over rival UCLA 18-9.

Klass, a senior driver from San Ramon, Calif., led Stanford to the national championship semifinals. Klass was a First Team All-American in 2021 after leading the Cardinal in goals with 47. She also received First Team All-MPSF and MPSF All-Academic recognition. Klass had the second-best goals per game tally in MPSF with 2.5, and led the league with 67 sprints won.

Established in 1999 by The Olympic Club, the Cutino Award is given annually to the top men’s and women’s NCAA Division I water polo players as voted on by coaches from across the country. The namesake of the award is a legend in United States water polo history, with eight NCAA titles as head coach at Cal. The Olympic Club has a long and distinguished competitive water polo history, a tradition that continues today in the pool with some of the best age-group teams in the world.