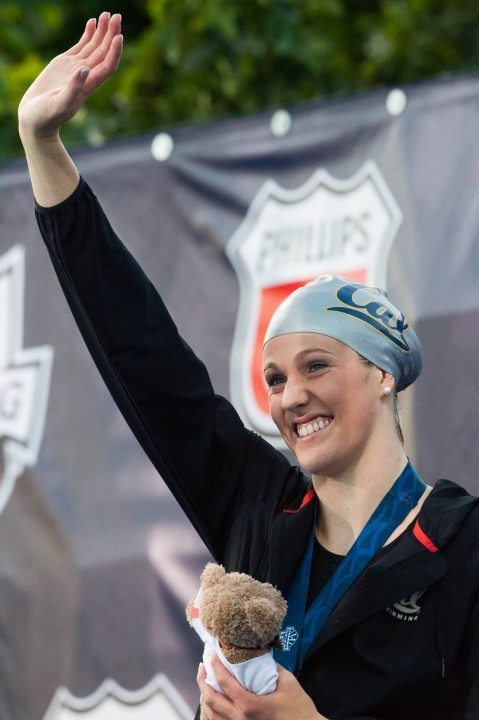 The Cal women, after their dual meet victory over #3 Stanford, have jumped the two-time defending champions from Georgia for the top spot in the latest CSCAA Coaches’ Poll.

Aside from that, there weren’t many huge shakeups in the latest rankings. The biggest movement in the top 10 was the slide from the North Carolina women, who fell to 9th place from 5th in the previous rankings despite winning both of their dual meets (against Duke and NC State) since the January 29th edition was released. When the last polls came out, voters were coming straight off of the excitement of the Tar Heels’ narrow victory over 7-time defending ACC champs from Virginia, but the Cavaliers have once again moved ahead of the Tar Heels.

Note: SwimSwam is not a voting member of this poll. Our Power Rankings can be seen here.

The College Swimming Coaches Association of America (CSCAA) Division I Team Rankings are compiled by nine CSCAA-member coaches and one media member.   This is the final ranking of women’s teams for the 2014-15 season.

The CSCAA DI Poll Committee will produce in-season rankings of the 25 best performing NCAA Division I Swimming and Diving teams in rank order at the time of each poll.  The poll is not designed to predict the results of the NCAA Championship, but rather which teams would win head-to-head against other teams in the country. Rankings are based on performances that have taken place since the previous poll and include invites as well as dual meets.

CSCAA NCAA Division I Women’s Swimming and Diving Ranking as of February 16, 2015

this is actually a reasonable ranking, as opposed to the men, which is crazy

The caption under the picture is misleading. Cal by no means dominated Stanford. I watched the meet on the Pac 12 network and if I remember correctly, Stanford was only down by around 10 points going into the final relay. The meet was close all the way through. I believe the final score was 150 something to 140 something.