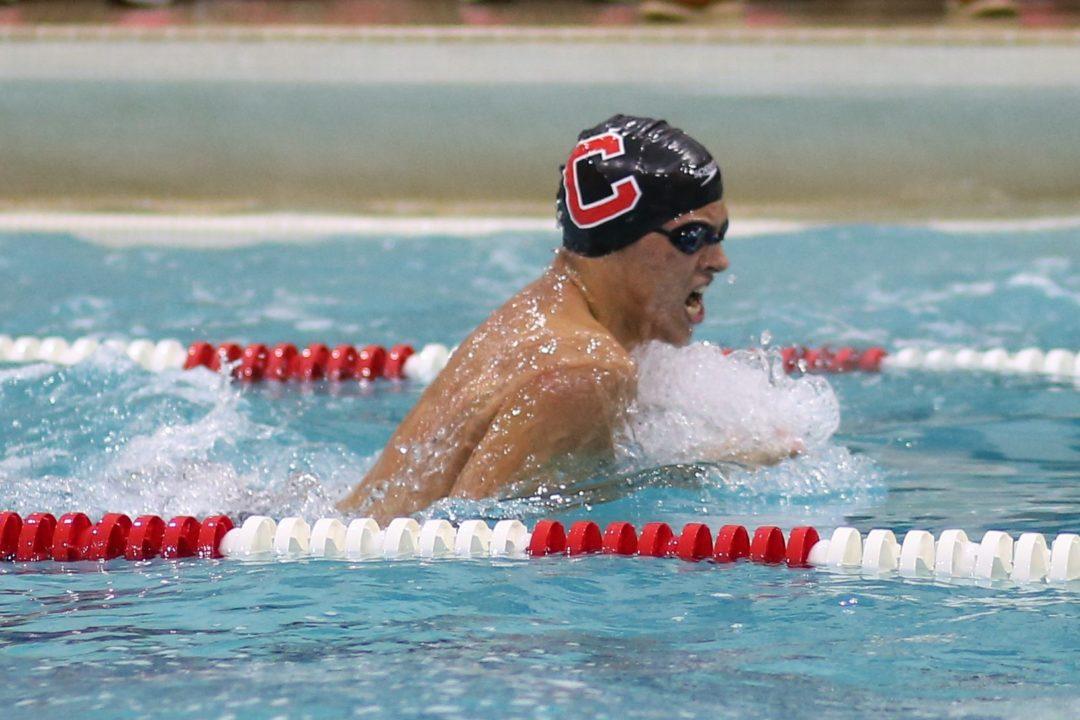 Both the men's and women's teams from Cornell defeated St. Bonaventure in their season opener. Next week, the team begins its Ivy League competition. Stock photo via Cornell Athletics

ITHACA, N.Y. – It had been a long time coming, but the Cornell men’s swimming and diving team made the absolute most out of its return to competition, conquering St. Bonaventure, 156-87, in its season opener on Saturday evening at Ithaca College’s Kelsey Partridge Bird Natatorium in Ithaca, N.Y. With the victory, the Big Red improves its all-time record over the Bonnies to a perfect 6-0.

Cornell captured nine individual event wins en route to the team victory, including finishing first in both relays on the day. The Big Red opened the meet with a win in the 200 medley relay, as the team of Logan Holt, Jack Casey, Jeremy Marcin, and Kyle Pro was the first to touch the wall in 1:33.85.

It was a rookie and a senior that found success in the freestyle distance events, as freshman Joseph Gurski and senior Jake Lawson picked up victories in the 500 freestyle and 1,000 freestyle, respectively. Gurski clocked a winning time of 4:45.13 in the 500, while Lawson was the first to finish his 1,000 race in 9:49.09. The Big Red also shined in the freestyle sprint events, with junior Jeremy Marcin winning the 50 freestyle (21.60) and freshman Jack Banks placing first in the 100 freestyle (47.16) in his collegiate debut.

Back in the swimming events, junior Jacob Bass and freshman Sebastian Wolff added further to the Big Red’s first-place count. Bass finished ahead of all competitors in the 200 breaststroke with a time of 2:08.31. Wolff clocked in at 1:54.14 in the 200 IM to win the event.

The day ended for Cornell just as it started, with a relay win. This time, it was the team of Banks, Pro, Ian Mackey, and Marcin in the 200 freestyle relay, where the group emerged victorious in 1:04.31.

The Cornell men’s swimming and diving team will open Ivy League action next weekend when it hosts Harvard and Dartmouth on Saturday, Nov. 13 at 11 a.m. at Ithaca College’s Kelsey Partridge Bird Natatorium in Ithaca, N.Y.

The Cornell women’s swimming & diving team returned to competition on a high note, triumphing over St. Bonaventure, 144-92, in its season opener on Saturday evening at Ithaca College’s Kelsey Partridge Bird Natatorium in Ithaca, N.Y. The win marked the program’s fifth-straight victory over the Bonnies.

Veterans and newcomers alike came together to lead the Big Red to success, as Cornell recorded seven individual event wins en route to the team victory. Senior diver Demetra Williams didn’t skip a beat, picking up right where she left off two years ago with victories in both the 1-meter (244.80) and 3-meter (267.98) diving events. Junior Melissa Parker was the second returner of the day that started off the season in the win column, finishing first in the 200 freestyle with a time of 1:55.42.

Parker’s was just one of numerous strong performances in the freestyle events for Cornell, as a Big Red swimmer placed first in the 100, 200, 500, and 1,000 freestyle races. In her collegiate debut, sophomore Priscilla Wongso won the 100 freestyle, clocking in at 52.26.

In the distance freestyle races, it was rookies Schuyler DuPont and Allie Danko that emerged victorious. DuPont touched the wall first in the 500 freestyle (5:13.31), while Danko secured the win in the 1,000 freestyle (10:30.54).

The final victory of the day for Cornell came in the 200 medley relay. A team comprised entirely of student-athletes competing in their first collegiate meet, freshman Sophia Tsai, sophomore Amy Wu, freshman Alex Syrkin, and Wongso were a winning combination, notching a time of 1:48.29.

ITHACA, N.Y. – Senior Alec Thomas was victorious in two events for the Bonnies, while freshman’s Alexander Behr and Lucas Dekaney each picked up event wins Saturday evening at Cornell University.

Thomas led the way for Bonaventure by scoring his first victory of the evening in the 200-yard freestyle with a time of 1:42.38. Later on, Thomas would capture his second victory in the 200-backstroke touching the wall in a time of 1:54.64.

In the 3-meter dive Dekaney picked up his first collegiate victory with a score of 319.13. Fellow freshman diver Zyad Morsy would respectively finish third in this event (293.18), and second in the 1-meter dive (276.23)

Junior Nicholas Nakaya placed second with a time of 2:11.51 in the 200-breaststroke.

The 200-freestyle relay team of Thomas, Kalletta, sophomore Tommy White, and junior Griffin Witte would end the evening with a second-place finish touching the wall in a time of 1:05.78.

The Bonnies return to action next weekend when they travel to Buffalo, N.Y. to take on Canisius on Saturday, Nov. 13. The meet is scheduled to begin at 1:30 p.m.

Kimmel continued her great start of the season by capturing a victory in 200-yard IM with a time of 2:08.43. She picked up her second event victory in the 200-breaststroke touching the wall in a time of 2:18.81.

The team of freshman Alica Janssen, senior Claire Schaef, sophomore Maggie Metcalf, and sophomore Madelyn Green finished the evening with a time of 1:44.66 to capture a victory in the 200-freestyle.

The Bonnies will travel to Buffalo, N.Y. for their next meet to take on Canisius on Saturday, Nov. 13. This meet is scheduled to begin at 1:30 p.m.