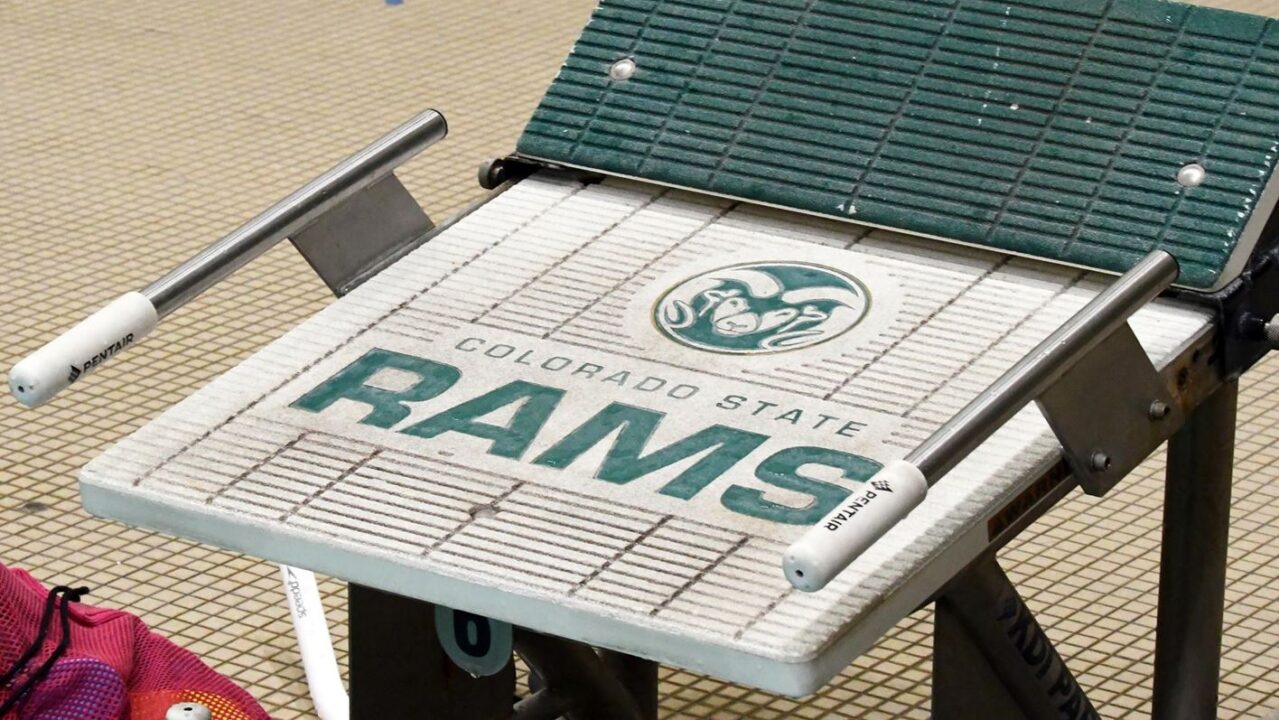 CSU head coach Christopher Woodard picked up four high school swimmers who signed their National Letters of Intent to become Rams for the next four seasons. Stock photo via @CSUswimdive

FORT COLLINS, Colo. – With a definitive list of wants for this recruiting class, Colorado State women’s swimming and diving head coach Christopher Woodard found four high school swimmers who fit the bill perfectly, all of whom signed their National Letters of Intent to become Rams for the next four seasons.

Woodard and his staff were looking for sprinters in particular, as well as competitors who could attack the individual medley, leading them to Ashlyn Hembree, Leigha O’Connor, Azalea Shepherd and Alexis Trietley. Colorado State will graduate seven seniors from a roster which has already posted a 13-0 dual mark to start the season, reestablishing the school record for duals wins in a single season.

“Our staff knew that we needed to address some of the sprint and IM events with a talented class of seniors on their way out,” Woodard said. “We believe we landed the backbone of our team for the next four years with these young women.”

Hembree, who trains with First Colony Swim Team under Pete Wright, comes to the Rams as a Futures qualifier and a Junior Nationals relay performer. She has competed one season for George Ranch High School, placing eighth as a junior in the 200-yard individual medley, earning academic All-District honors. She will bring versatility to the team, holding a personal best of 2:05.59 in the 200 IM, 51.99 in the 100 free and 2:20.64 in the 200 breaststroke. She intends to major in Business/Marketing.

Woodard says: “We identified Ashlyn very early in the recruiting process as an athlete who possessed the versatility that we needed. Not only was her event list of fly, breast and IM valued, but her ability to race early was something we coveted. And her visit this summer sealed the deal as we could see the passion that she had for her sport and for Colorado State.”

A four-time state qualifier in high school, she has placed six times at the state meet, being named her team’s MVP for three consecutive years. She also competes for South Lake Aquatics Club under coach Donald Gibb, where she earned the team spirit award and qualified for the senior championships and Futures meets, placing twice at the senior championships. She holds personal-best of 23.94 in the 50 free, 56.57 in the 100 butterfly and 52.50 in the 100 free. Her goal is to major in Hospitality Management.

Woodard says: “Leigha came on late in the recruiting process, but her enthusiasm for Colorado State was undeniable. She possesses a natural ability to sprint free and fly, and the responsibility she takes in her own personal training and her work life were assets in our staff estimation. As she begins to develop more core strength and technical skills she will definitely help boost our sprint corps.”

Shepherd has rewritten the record book at her high school, holding eight of 11 school marks while qualifying for state all three years and becoming the first freshman in her district to qualify for state in all four of her events. She has placed five times at state while being named her team MVP three years running and the team captain as a junior. She competes for coach Jason Walter with Lakeside Aquatic Club, where she is part of two team relay records, qualifying for TAGS, sectionals, futures and the Arena Winter Championships. A sprint freestylers, she holds personal-bests of 23.78 in the 50 free, 51.52 in the 100 free and 1:52.77 in the 200 free. She plans to major in Health and Exercise Science.

Woodard says: “Our staff put an emphasis on sprinting this season, but we needed athletes who were just beginning to develop and took control over their development. Azalea fit the mold as someone who was just beginning to find her spot in the sport and who takes her training seriously. Her dedication and her respect for teammates and coaches led us to believe that this future leader has the intangibles to make an impact in the sprint free events and in the locker room.”

Trietley is a three-sport athlete in high school, also competing in track and cross country. In the pool, she has posted All-American consideration times in becoming a five-time sectional champion, a six-year letterwinner in being named her school’s athlete of the season twice. She holds numerous school and pool records and was named team captain twice. Competing for Bradford YMCA and coach Caren Barnes, she won the 100 free at the PA State Championships and placed third in the 50 free and fourth in the 100 free at the YMCA Long Course Nationals meet. She holds personal-bests of 23.35 in the 50 free, 51.41 in the 100 free and 1:52.62 in the 200 free. She will pursue a major in Biomedical Sciences.

Woodard says: “We knew early on in our conversations with Alexis that we had a racer—someone who lives for the thrill of speed. Alexis possessed a single-minded determination to develop strength and race with determination. Once Alexis fine-tunes her strokes and has the opportunity to train with other like-minded individuals, we believe that she will emerge as a force within the Mountain West sprint free events.”