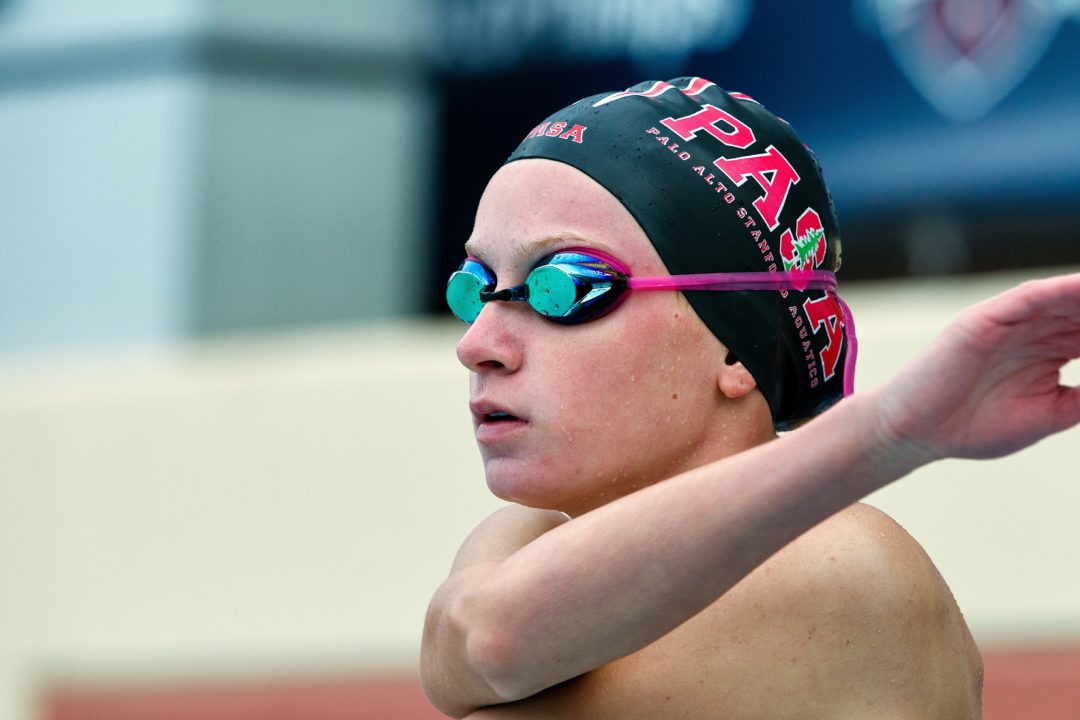 Ally Howe leads the field into the final of the 200 IM by over 2 seconds. (Photo: Tim Binning/TheSwimPictures.com)

Thanks to Amanda Smith for headlining our coverage of the CIF Central Coast Championships this weekend.

CIF is underway all across the state of California. California is a hot bed for fast high school swimming. While there may be no official “state championship”, California breaks up their state into sectionals. Today the Central Coast Section (CCS) swim and dive championships kicked off their preliminary session. Last year the boys from Bellarmine College Prep and girls form Gunn High School took away the team championships, and both of the defending champions could be challenged by Palo Alto High School.

The night started off with the 200-yard medley relay. The top three teams all turned in under the top seeded time from Menlo-Atherton, who is now third at 1:46.55. Presentation sits first with 1:46.33 followed by Pioneer at 1:46.43. Gunn sits in fifth for finals tomorrow. Palo Alto had a big add of nearly four seconds, and will not have a second swim tomorrow. On the men’s side Bellarmine and SFHS finished at 1:33.56 and 1:33.88 in preliminaries. Palo Alto once again found themselves missing out on big relay points, finishing ninth in the preliminaries.

Gunn has the top seed for the women’s 200-yard freestyle, with Jennifer Campbell swimming the only sub 1:50 in the field. Top seeded Catherine Ladd from Willow Glen swam a bit off her seedtime of 1:47.96 to sit in second. Aidan Burns from Bellarmine has top honors for the men, dropping over two seconds from his seed finishing 1:39.15. SFHS finds themselves sitting second to Bellarmine again in this event, with Benjamin Ho at 1:40.44.

Next up was the 200-yard individual medley, were Ally Howe from Sacred Heart Preparatory dropped over five seconds to swim a 2:00.03 and is seeded first by over two seconds with Burlingame’s Leah Goldman in second. SFHS sits in first for the men, with Curtis Ogren turning in an impressive 1:45.60. That is almost a four second drop, and six seconds faster than his next competitor. Palo Alto could make up some points in this race, finishing with two in the top eight with William Lee, 4th, and Alex Francis, 7th.

We saw some great speed from Lindsay Engel down in the SoCal area, and Pioneer’s Linnea Mack swam under 23 seconds to sit in first at 22.74. Monta Vista has the second and fourth seed with Sarah Kunitz and Carly Reid. The splash and dash for the men has two swimmers under 21-seconds with Palo Alto’s Andrew Liang and Belarmine’s Copper Burrill at 20.91 and 20.93. Bellarmine also has fourth place finisher Jackson Locke for tomorrow’s finals.

Mack Linnea from Pioneer finished 54.16 in the 100-yard butterfly. Palo Alto seems to pick up some seed with their swimmers nearing the second half of the meet. Andrew Liang sits first at 47.55, almost three seconds ahead of Christopher Schaeffer from Bellarmine, 50.13. Both teams have two swimmers in the B finals, with Palo Alta in 9th and 16th and Bellarmine in 10th and 15th.

In the 100-yard freestyle, the top four swimmers finished tightly in the preliminaries, all within .5 seconds of each other. Top honors went to Carly Reid, Monta Vista (51.41), followed by Catherine Ladd, Will Glen (51.57), Gabrielle Bethke, Gunn (51.90), and Courtney Schultz, Cupertino (51.99). At this point in the meet, Bellarmine boys lay the hammer down. The top three seeds are all Bellarmine with Jackson Locke, 45.15, Cooper Burrill, 46.01, and Timothy Kou, 46.02. Palo Alto had no swimmers in this event make it back for tomorrow.

Moving onto the longer race in high school, Sandra Soe from Pioneer dropped four seconds from her 500-yard freestyle seed to finish at 4:50.95, and has a four second lead over Jennifer Campbell from Gunn. Using the momentum set up by his teammates in the 100 free, Aidan Burns from Bellarmine dropped ten seconds from his seed to finish 4:25.43. He has a eight second lead over Daichi Matsuda from Gunn. Other impressive drops in this race were 14 seconds from Paul Huang from Evergreen Valley, 4th, and15-seconds from Chris Hinrichs from Sacred Heart Preparatory, 6th.

The defending team champions Gunn is in sixth in the 200 freestyle yard relay, while Monta Vista was the top seed coming into the meet, added a bit but still remains in first. Palo Alto missed the A final by .1 finishing ninth in preliminaries. The boys from Bellarmine continued their dominance, and sit in first at 1:24.83. Saint Ignatius College Preparatory are second, 1:26.23, followed closely by Palo Alto 1:36.45, and SFHS, 1:26.98.

The 100-yard breaststroke could shape up to be a good race tomorrow with Heidi Katter from Castilleja and Sarah Kaunitz from Monta Vista finish 1:02.31 and 1:02.84. SFHS’s Curtis Ogren swam a sub-55, with 54.42 for the boy’s 100-yard breaststroke. Serra HS’s Joe Kmak sits second for finals tomorrow at 55.80.

Concluding preliminaries was the 400-yard freestyle relay. On the women’s side, three different teams are seeded first for tomorrow’s finals, with Pioneer leading the way. They dropped an impressive near six seconds off their seed, finishing 3:29.14. Monta Vista has the top seed in the individual 100 freestyle, and they are close in second at 3:29.92. Gunn is third at 3:31.01. Palo Alto once again finds themselves on the wrong side of the finish, in ninth place by.05. It is hard to say who will come out on top for the women’s meet. Should be a great meet tomorrow for the ladies!

No surprise that the Bellarmine boys are seeded first, after finishing first through third in the individual 100-yard freestyle. They finished at 3:05.11. SFHS is in second at 3:08.19 and Palo Alto in third 3:09.84. It seems like Bellarmine may be hard to beat, and look poised to repeat as champions. They pick up speed at the first sprint event, and seem to never look back. These boys should throw down some fast times tomorrow at finals.