Cielo Leaps to World Leader in 21.39; Fratus Not Far Behind on Day 3 of Maria Lenk 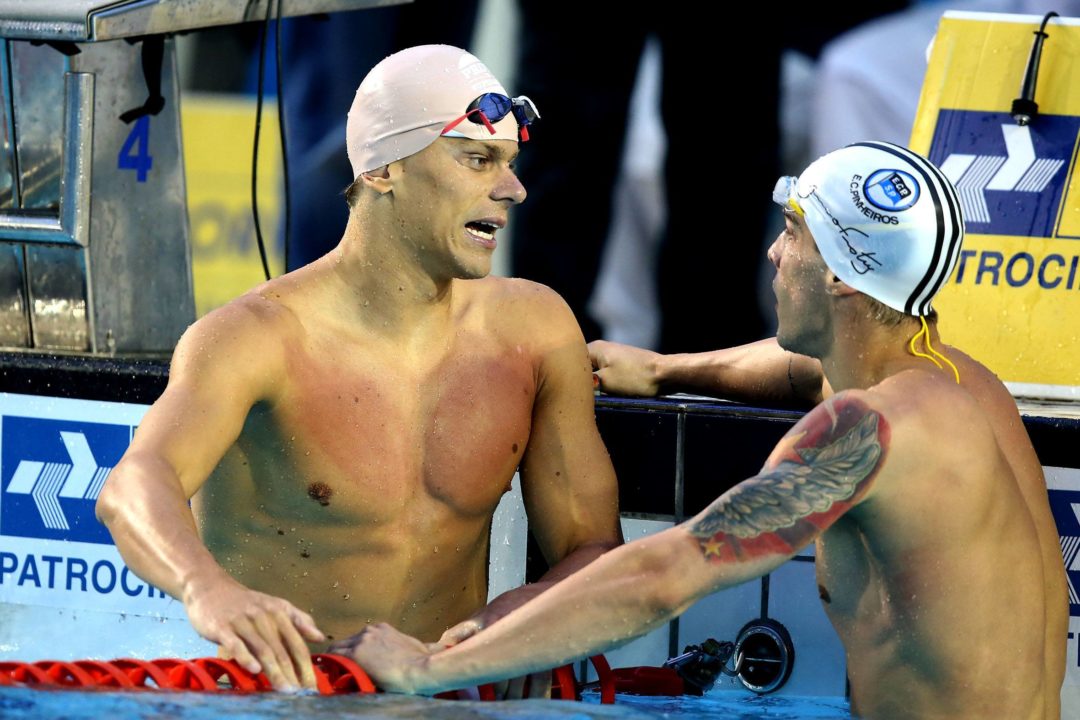 Cesar Cielo (left) was wearing a nude cap in support of the cancer charity GRAAC as he and Bruno Fratus (right) swam to the top two times in the world in the 50 free this year. Current photo via Satiro Sodre/SS Press

Aside from Delfina Pignatiello and Julia Sebastian, Grassi remains one of three Argentinian swimmers who have already qualified for the Tokyo 2020 Games.

Thanks to D’Artagnan Dias for contributing to this report.
After years of somewhat of an internal battle for Brazilian Cesar Cielo with the 50 free, where the weather, the blocks, the conditions, the training, the country, or any number of other factors weren’t right, he’s finally once again hit a ‘magic swim’ in the 50 free.
Cielo was the big star on day 3 of the 2014 Maria Lenk Trophy, which is Brazil’s long course national championship meet and third of three Pan Pacs qualifying events.
Men’s 50 Free – FINALS
1-Cesar Cielo(Minas) 21:39
2-Bruno Fratus(Pinheiros) 21:45
3-Nicholas Dos Santos(UNISANTA) 22:32
Despite the good time, and while both Cielo and Fratus said that they were pleased with their times, Cielo still mentioned the cold weather and the poor blocks. This time, however, they didn’t seem to inhibit his start. Both he and the runner-up Fratus were best where they’re known to be among the best: Cielo in the first 15 meters, and Fratus in the last 5. He made up a lot of ground in the second-half of this race, especially inside the flags.
Cielo claimed that ‘with proper blocks, he’d be looking at a 21.1 or 21.2″ (paraphrased translation) in this 50 free.
For Fratus, that’s a lifetime best by .15 seconds and a good return after battling some injury issues. This is his first big meet after beginning training with Brett Hawke in the United States, and the results showed for sure. Fratus credited Hawke after the race for his improvements. Those two now sit 1-2 in the 2014 World Rankings.
Nicholas dos Santos took a bronze medal in 22.32, interestingly enough after winning a swim-off with Joao de Lucca to just make it into the top 8.
Hawke’s other Auburn trainee, Marcelo Chierighini, took 5th in 22.51.

1-Katinka Hosszu(Corinthians) 4:38:81
2-Florencia Perotti(GNU) 4:51:02
3-Júlia Gerotto(Corinthians) 4:56:95
After her impressive 50 free to start this meet on Monday, and after her coach Shane Tusup proclaiming that Hosszu would taper for this meet, there were huge expectations about the time that would result. She got their in prelims with a 4:34.91, but ultimately couldn’t live up to them in finals. Hosszu did still swim a solid, unchallenged, 4:38.81 for the win, though. She was out very well in the evening on the butterfly, but tightened up on the backstroke leg to fall off of her own pace.
She too would say after her race that she was affected by the late cold that rolled in over Sao Paulo.
The runner-up was Argentina’s  Florencia Perotti in 4:51.02, and the highest-placing Brazilian was Julia Gerotto, who trains at the University of Kentucky, in 3rd with a 4:56.95.

1-Thiago Pereira(SESI-SP) 4:15:45
2-Thiago Simon(Corinthians) 4:17:98
3-Brandonn Almeida(Corinthians) 4:20:76
Thiago Pereira has made a few pushes in the last couple of years to try different pacing tactics in the IM races, but ultimately he winds up coming back to the same strategy: a very hard first three legs, and then running out of gas on the freestyle. That’s exactly what happened here, as he was 3:12-flat going into the freestyle, and had the slowest last 100 meters of the field. There was still enough room for him to win in 4:15.45, however.
Meanwhile, Thiago Simon picked up his 2nd Pan Pacs cut after winning the 200 breaststroke earlier in the meet. His focus on the breaststroke showed in that 200 win, and it showed again in this IM as he split right around what Pereira, a very good breaststroker, split.
The 16-year old Brandonn Almeida took 3rd, putting a pair of Corinthians swimmers onto the podium.

1-Jeanette Ottesen(Corinthians) 24:59 CR
2-Graciele Hermann(GNU) 24:79
3-Alessandra Marchioro(Botafogo) 25:17
Things would continue to roll for Corinthians as Jeanette Ottesen used a huge start en route to a 24.59. That’s a new Championship Record, and is faster than the Brazilian and South American records. That means an extra 70 bonus points on top of the 35 she already earned for the win.
By the time she emerged from underwater, most of the field had already taken about three strokes, and she was almost half-a-body-length ahead of Graciele Hermann already.
Hermann did have a good kick, but it was too big of an advantage to overcome and she wound up 2nd.
3rd-place finisher Alessandra Marchioro was happy with her result of 25.17. She’s had a lot of health problems in the last year, first with some stomach issues and then having a weight fall on her arm during dryland training. She came into this meet on only about 6 weeks of solid training.

1-Poliana Okimoto(Unisanta) 8:43:78
2-Carolina Bilich(Minas) 8:47:73
3-Viviane Jungblut(GNU) 8:50:27
Poliana Okimoto won her second distance event of the meet. As she and eventual runner-up Carolina Bilich pulled away from the field, Okimoto sat on her opponent’s hip until the last 150 meters or so. She then kicked into another gear and took a relatively-easy, four-second win.

1-Minas     7:20:05
2-Unisanta 7:23:28
3-Pinheiros 7:24:15
MInas got their advantage early with 200 free individual event winner Nicolas Oliveira leading off in a 1:48.94, ahead of Corinthians’ Fernando Ernesto dos Santos in 1:50.42.
Ultimately, Corinthians would fall off of the pace and then claw back to touch the wall 2nd before being called for a DQ on an early takeoff by their 2nd swimmer.
That would cost them significant points, and maybe is enough to keep Minas in the team battle.

1-Corinthians 8:08:47
2-Minas 8:09:27
3-SESI-SP 8:11:59
This race looked like it might be over early, with Katinka Hosszu opening for Corinthians in a 1:57.24, putting her almost four seconds ahead of Minas’ leadoff Manuella Lyrio (2:01.01).
But Minas negated that with a strong 2:00 leg from Inge Dekker going 2nd to actually take a half-second lead over Corinthians.
Carolina Bilich built on that lead a little bit in the 3rd 100 meters, not too long after that 800 free swim, but Minas on their anchor leg left 15-year old Maria Paula Heitmann to train and fend off Olympic veteran Jeanette Ottesen.
Heitmann did well on the first 100, but Ottesen proved too tough coming home as she took Corinthians to a win. That’s a new Championship Record for the Corinthians women as they looked to atone for the big mistake from their men.
Full, live meet results are available here.

PREQUAIFIED SWIMMERS FROM PRIOR MEETS

Waiting tomorrow for some good times on 200 fly (de Deus) and 100 Breast, at least one guy going under a minute.. and Maybe some surprise time at 200 fly women..

Both 50free(Men and Women) were great races!
Cielo has the edge on his start, but was nowhere near Ottesen start.She won the race at start.
In girls 4x200relay last leg, Heitmann opened too strong, and Ottesen was a bit of surprise(she is a pure sprinter) and run away from the field in the last 50 beating Heitmann by over two seconds in the last leg(31:11X33:26).Ottesen was having a dificult time trying to stand up in front of the TV camera in the after race interview.