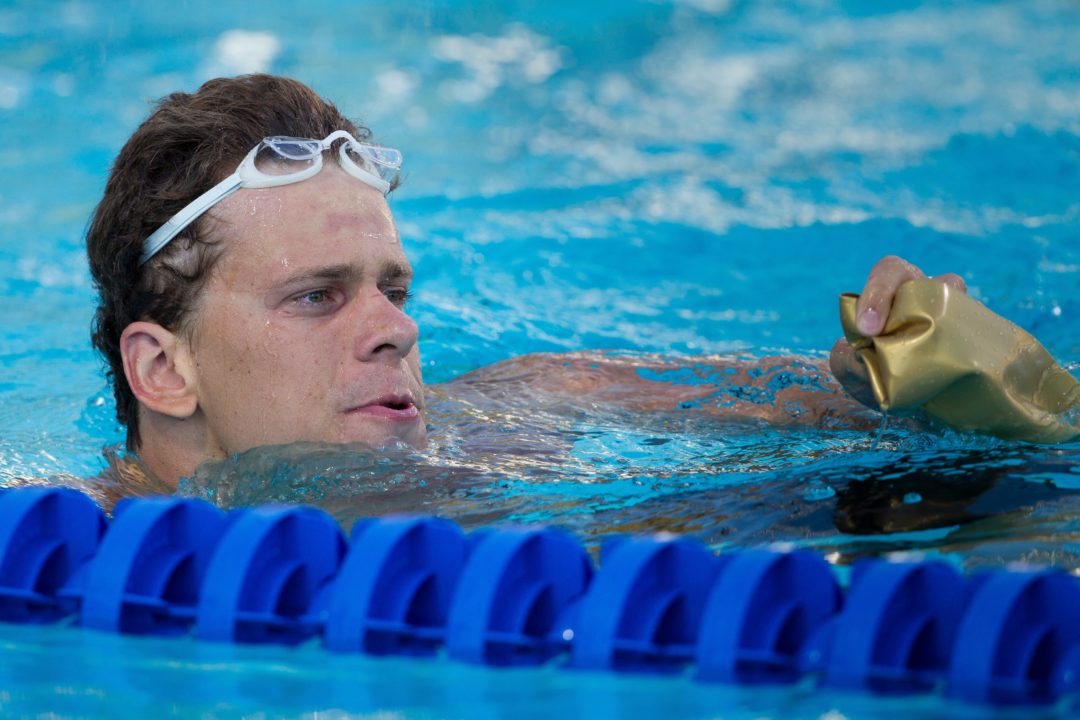 Brazil's Cesar Cielo tacked a 100 free title onto his earlier wins in the 50 free and fly on the final day of the South American Championships. ©Tim Binning/TheSwimPictures.com

The 2012 South American Championships wrapped up Saturday from Belem, Brazil. With the full World-Championship schedule jammed into only four days, there was some fatigue set in on this final day, but that led to some exciting racing.

In the highlight event of the day, the 100 free, Cesar Cielo came back for a strong win in 48.70. That time is more indicative of the training he’s doing right now than was his 50 from Friday (21.85), but it still was a far cry better than his heavily-fatigued 49.3 relay anchor from the men’s medley relay.

In 2nd was a similarly-paced swim from his young teammate Bruto Fratus in 49.69. Third-place went to Argentina’s Federico Grabich in 49.77.

Cristian Quintero, a Venezuelan who has begun training and competing in 2012 in the United States for USC, swam a 49.77 just a week out of the collegiate championship meet. That’s right at his best time from last year’s Pan Am Games, and should have the Trojans feeling really good that they’re timing their taper very well. He’s one of the few missing-pieces to the puzzle for a Trojan squad that needs everyone swimming well to succeed.

Much like his training partner Cielo, Brazilian IM’er Thiago Pereira wasn’t quite as good in the longer race (the 400 IM) as he was in the shorter 200 IM. He still swam a solid mark of 4:24.49 to take the win, just outpacing Ecuador’s Esteban Salgado in 4:24.97 (which destroys his own National Record by some 6 seconds). It’s hard to draw many conclusions about his new pacing (it was apparently effective in the 200 IM) with that time, however. Pereira was just going out and seeing what would happen – as reports out of Brazil are that he was lifting weights shortly before the last session of this meet.

The only other results of note were in the women’s 50 free. There, Venezuela’s Arlene Semeco won in 25.21, just ahead of Brazil’s lanky teenager Gracielle Hermann in 25.31.

More impressive was Cielo coming home in 25.08.I never saw him doing something like that even in shiny suit times in a period of heavy training like that.
Just for note:
last year, Cielo best times at this time were 22.32 and 50.68.His first sub 22 was only in May.
As i always talk, Olympic year is amazing!

Thiago Pereira time wasnt so bad considering he was doing weights just some hours before his event.