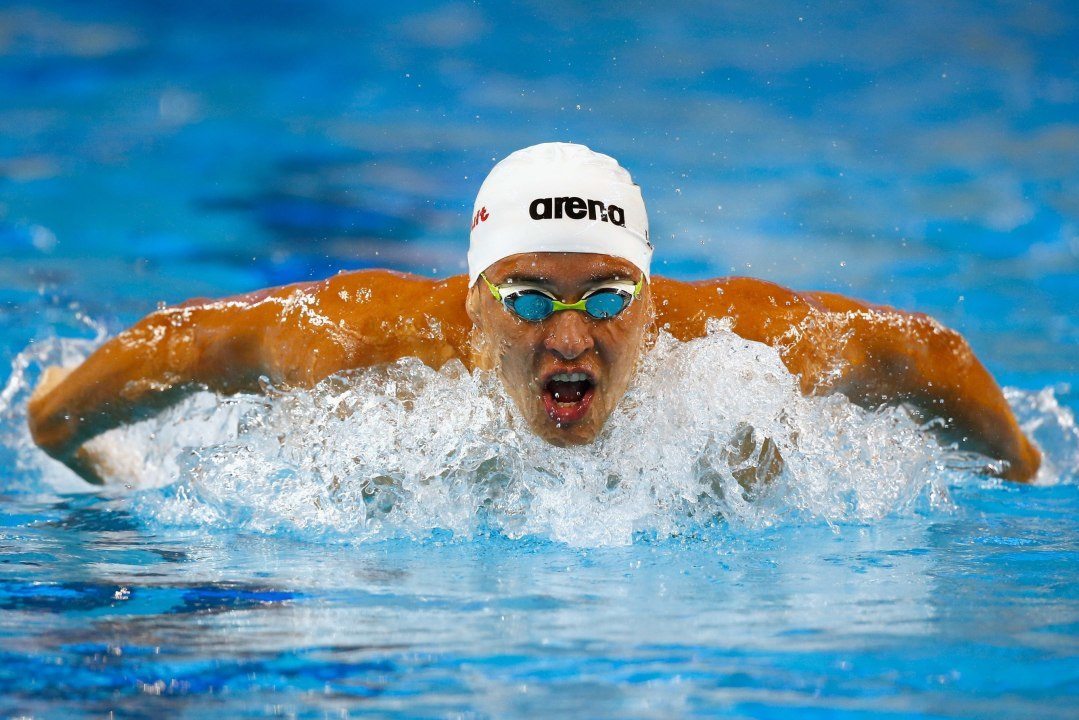 Chad le Clos, above, will swim four races at the Sellenbosch Grand Prix, but that won't include the 200 fly - a race that he's backed off from at in-season meets recently. Archive photo via FINA

It’s not often that mid-season Grand Prix meets in South Africa get a lot of global attention, but with Chad le Clos emerging as one of the biggest stars in the world, Karin Prinsloo making a late career-break toward stardom herself, and American budding star Michael Andrew spending three months in his parents’ homeland, things are heating up on the southern tip of Africa.

All three of the above-mentioned swimmers, along with several other of the country’s biggest stars (excluding Cameron van der Burgh), will race at the upcoming Stellenbosch Grand Prix meet from February 13th-15th in the Western Cape province.

Le Clos, who begins 2015 on a quest to defend his World Championships in the 100 and 200 flys in long course, won’t swim the longer of those two distances at this meet – despite being the defending Olympic champion. His lineup will include the 100 free, the 200 back, the 50 fly, and the 100 fly.

In two of those race, the 50 and 100 fly, 15-year old American Michael Andrew will be seeded 2nd behind him. Both swimmers typically swim well in-season, so don’t expect Andrew to upset his South African foe, but it should be a good educational experience for the young swimmer, going head-to-head with one of the world’s best.

On the women’s side, the headliner of the meet will be Karin Prinsloo, who had a breakout 2014. She’ll swim as the top seed in the 100/200/400 freestyles (with the 200 being her best event) and is also entered in the 100 and 200 backstrokes. Those backstroke races should be the premier events of the meet on the women’s side. Besides Prinsloo, they will feature South Africa’s best domestic backstroker, Jessica Ashley-Cooper, and a surprise entry from Barbora Zavadova of the Czech Republic – the 2012 European bronze medalist in the 400 IM.

The meet will also feature several members of the country’s ‘Get the Girls to Gold’ support programme.

“Both swimmers typically swim well in-season, so don’t expect Andrew to upset his South African foe” I am not saying that Michael isn’t an amazing swimmer but he has a long way to go before anyone expects him to be close to Le Clos in or our of season surely?

JM90 – specifically because of MA’s training style, he swims very fast in season, so for example, in Austin, he was almost as fast as Cullen Jones in the 50 free. He was only a few tenths behind Tyler Clary in the 200 IM.

So yes, your point is correct, he has a long way to go before beating le Clos in season, but that has a lot to do with the fact that le Clos also swims well in-season. If le Clos were a swimmer who performed as though he more beat-up during the year, MA would have a chance, because MA would be basically at his best, and le Clos wouldn’t. Make sense?

Also is it Long Course or short course as it says “#27 Men 100 LC Meter Butterfly” which i took to mean Long Course but Le Clos has entered a 49.84

49.82 is the world record. I believe they made a conversion according to his short course times from Doha.

I believe it is LCM, but he is seeded with his scm time. Just as at Winter Nationals you can be seeded with LCM times in a scy meet

Yes, YoungFish 11 I believe is correct – got seeded with a SCM time in a LCM meet.

Aren’t both Le Clos and Andrew coached by their fathers? Should be a cute little daddy boy family rivalry swim off swim sesh. Apparently the doctors in South Africa haven’t figured out the umbilical chord cutting procedure yet. Oh, Africa…

Welp. I look dumb. You can’t win ’em all. There’s always next time! I’ll get there.

He has already been 48.53 at a leadoff for the 4×100 in the Commonwealth games. I would say 49 low because it’s the beginning of the year.

Man, I sure hope MA doesn’t end up representing SA instead of US in Olympics someday (yes, I believe he’ll make an Olympic team!) Don’t leave us Michael! More medal possibilities on relays!!! Have a great time with your grandparents, but don’t forget to come home!!!!

Great to see Michael Andrew swimming in Africa against quality opposition. It’s a race between “The Present” and “The Future”. It’s a massive coup for a hastily arranged domestic Grand Prix. All they need now is to get Hagino to fly down for the weekend!