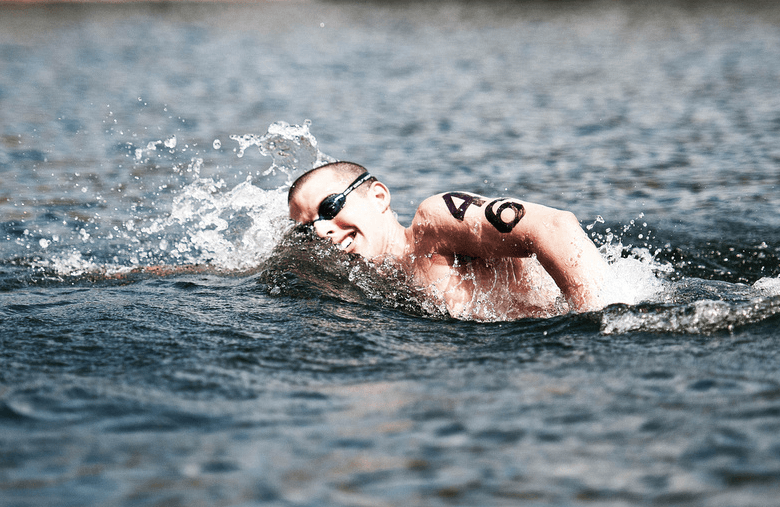 Dan O'Connor is one of the stars from this weekend's open water meet who hails from off-the-beaten-lanerope. (Photo Courtesy: Mike Lewis/OlaVistaPhotography.com)

Southern California is the epicenter of open water swimming in the United States. This weekend was a clear demonstration of that – Between Mission Viejo, Fullerton, Team Santa Monica, and USC, a huge majority of the top-5 finishers at this weekend’s biggest races live in, train in, are from, or in general are connected somehow to Southern California. There’s another good pocket of talent coming from Florida; that’s where USA Swimming holds their Nationals every year, so not a huge surprise there either.

But there’s another strong breeding-ground for open water swimmers popping up, and it’s in an area that’s much less traditional: Central New York.

Maybe Syracuse University didn’t realize the talent that was right in front of them when they finally phased out their program after last season, but there is a group of swimmers popping up from the area that are taking the open water scene by storm.

Alex Meyer, the men’s representative at the Olympics, comes from Ithaca, New York, which is about an hour south of Syracuse.

It gets even weirder than that, with Ashley Twichell, the winner of both the women’s 5km and 10km swims this weekend, and who seemingly has the best chance at taking a women’s Olympic spot, grew up swimming for the Syracuse Chargers. That’s the same club team (though a few years after) that Dan O’Connor grew up swimming for – albeit a few years after Twichell. O’Connor led the men’s 10k for quite some time, and then ended up 3rd in the 5km swim. (One of our readers added another – Shawn Parkhurst was 20th in the men’s 10k. He’s from Canisius College and Scriba, New York, which is an hour in the other direction from Syracuse).

The American open water swimming community is still a relatively small one, and for three of the country’s best to come from an area that is not really known for putting out elite swimmers is fun to see.

Not that Central New York is devoid of talent; they have as many good age group swimmers as many other parts of the country. Ryan Lochte actually hails from the area, but he didn’t become a serious swimmer until moving to Florida at age 11. Auburn’s Norberg sisters are from Ithaca as well. But they aren’t used to turning out the kind of super-elite talent that we’re now seeing in open water.

Maybe the success of these grads, none of whom are/were huge stars in college either, will encourage more kids from the area to take up the sport. It could become a hallmark of the region. Let’s hope so, because the more areas that really take ownership of this sport that’s still in its competitive infancy, the better it will spread from a niche market towards its goal of nationwide prominence.

Shawn Parkhurst, also from CNY, finished top 20 in the 10k as well

What about Ryan Feeley? Also another pretty good open water swimmer from New York he just didn’t compete in the competition this weekend

Ryan is from Southern NY, about 20 minutes North of the city. But yeah, he’s a very good open water swimmer as well

Braden,
I swam in meets with Lochte while he was still in the Rochester area and he was a pretty serious swimmer. I believe he was breaking niagara district records and dominating JOs. I also think his coach remained the same (his dad) when he moved to Florida.

I should have start by saying thanks for covering cny swimming. It is not often that we get this kind of exposure.

No problem Noah. Wherever there’s great swimming…we’ll be there!

As for Lochte, I seem to recall him saying in an interview one time that he didn’t take it seriously until after moving to Florida, but I can’t find it now.

Yeah. That sounds familiar. I just wanted to convey that his elite level talent was very apparent even as a 10 and under in Rochester. He still holds 5 Niagara district 10 and U records and was swimming for a very strong team. I was thinking of “serious swimmer” in a different way.

Yeah, CNY! Unfortunately, without Syracuse, there is no major D1 program in the area (the best is probably Cornell). State University of NY doesn’t have a “central campus” to draw major talent like most states.