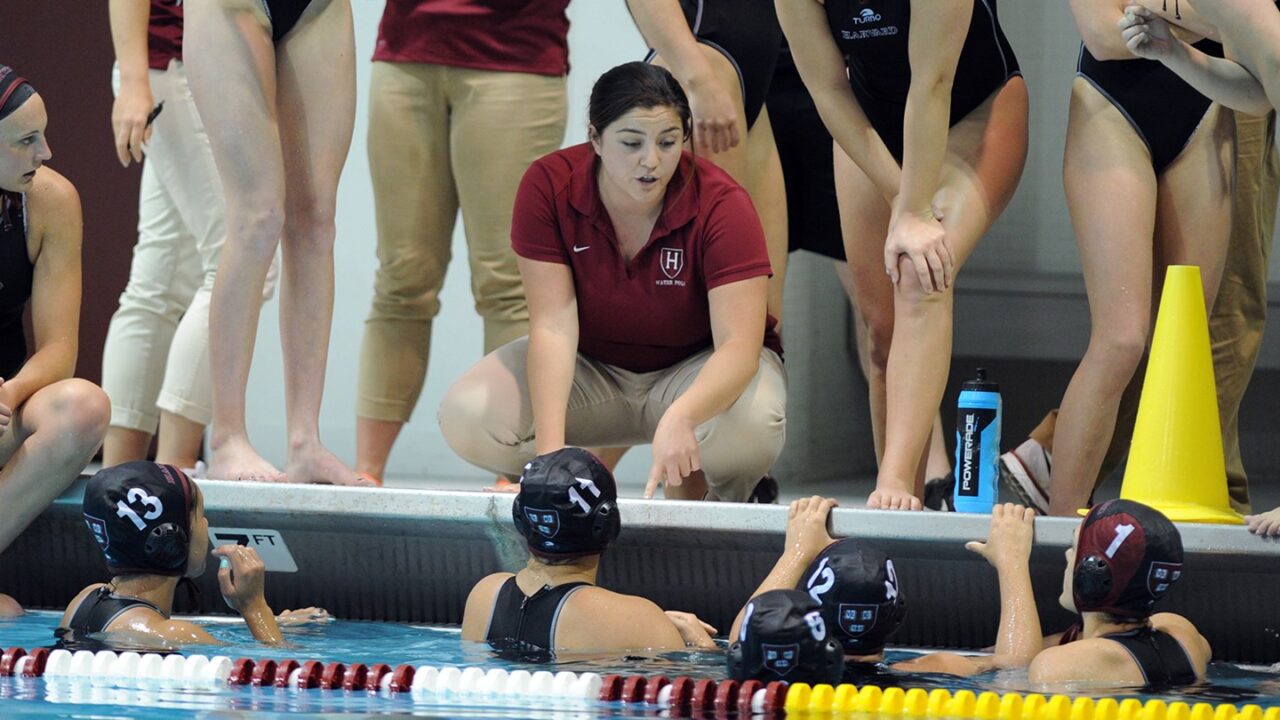 Churnside comes to Ann Arbor after eight seasons as the assistant coach at Harvard University. Archive photo via Harvard Athletics

“I am thrilled to welcome Cassie to U-M as our head coach,” said Manuel. “Cassie is highly regarded in the water polo community and has demonstrated high character throughout her ascension from a national championship student-athlete to a successful coach and mentor.”

“First, I would like to thank Warde Manuel for this opportunity,” said Churnside. “I am very excited about the opportunity of leading the Michigan women’s water polo program. Being able to work at an institution with such a high caliber of scholar-athletes, and an athletic department that has a history full of traditions and competitive success is a dream come true. I cannot wait to step on campus and begin this great journey with these amazing women.”

Churnside comes to Ann Arbor after eight seasons as the assistant coach at Harvard University. During her time at Harvard, Churnside helped coach both the men’s and women’s teams.

During the 2022 season, Churnside helped lead the team to its first-ever CWPA Championship game appearance en route to Harvard head coach Ted Minnis earning CWPA Coach of the Year for the second time with the women’s team. The team went on to post a 23-7 overall record, the second-highest single-season win total in program history. The seven losses also marked the fewest in varsity program history, barring the shortened 2020 season. In addition, the Crimson boasted a quartet of All-Conference honorees, including Zoe Banks, Inde Halligan, Grace Thawley and Evan Tingler. All four student-athletes also gained ACWPC All-America honors, including a spot on the third team for Halligan.

Churnside helped guide the Crimson men to a historic season in 2019, earning an undefeated 27-0 record through regular-season play and breaking program records for best start to a season and most consecutive wins. In its sixth straight 20-win season, Harvard defeated Princeton to become the new NWPC Champion. In addition, four members of the Crimson — seniors Charlie Owens and Austin Sechrest, junior Dennis Blyashov and sophomore Noah Hodge — earned first team All-NWPC honors, while Owens was named MVP of the conference.

Churnside, an Orange, Calif., native, helped to lead the Stanford Cardinal to the 2011 and 2012 national titles. She graduated from Stanford in 2012 with a bachelor of arts in communication.

What They’re Saying about Cassie Churnside

“I am so excited, happy, and proud of Cassie. She is not only an amazing coach and leader but an even better person. I am going to miss seeing her every day here at Harvard! She has worked so hard to set herself up for this opportunity, and I know she will excel.”