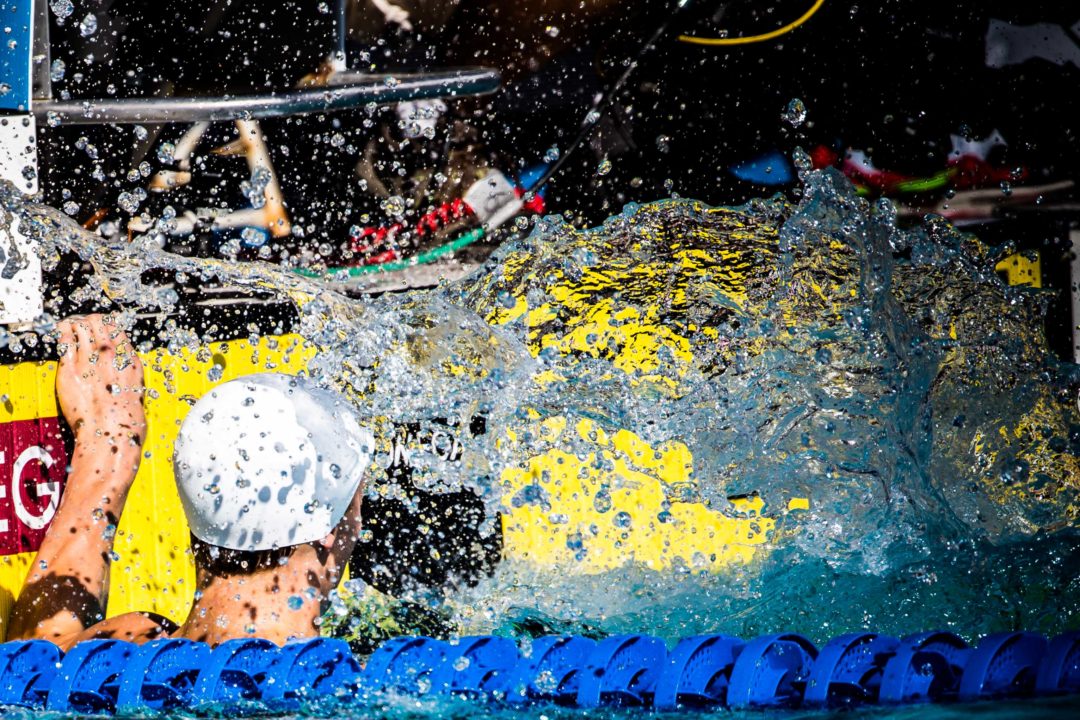 With no major meets planned for the rest of the summer, Carson Foster hopes to get a jump start on what's now an Olympic year by heading to Austin early. Current photo via Jack Spitser/Spitser Photography

It has been quite the strange spring for most high school seniors, and that’s especially true for those seniors with Olympic aspirations. With his sights set on competing for a spot on the Olympic Team, Carson Foster was one of those who chose to graduate high school a semester early in order to focus on swimming in the run-up to what was supposed to be the 2020 Tokyo Olympics, before heading to the University of Texas this fall. Obviously those plans were put on hold with the Olympics and the USA Olympic Trials being postponed. In the wake of those postponements, Foster’s made yet another change to the plan, opting to head to Austin at the beginning of the summer, rather than waiting to the end.

Foster took to Instagram to thank the Mason Manta Rays, specifically head coach Ken Heis, as he prepared to depart Ohio this week.

In a statement to SwimSwam, Foster elaborated on the people who have helped shape his swimming journey thus far.

I am so grateful for my time at Rays. This summer wasn’t how I imagined it going of course but it doesn’t take away from all the memories and lessons I’ve gained being apart of Mason. Mason is truly a special place to be. And Scott Goodpaster at Cincinnati Functional Fitness has been my trainer for 9 years and has had an priceless impact on my siblings and my success in the sport of swimming. His attitude and energy he brought towards us and the sport is unlike any other.

Back in December, Foster told us that at one point he had contemplated heading down to Austin for the spring, but ultimately had decided to stick with the Manta Rays and Heis, the coach who helped him on the way to becoming one of the top swimmers in the nation. Foster holds the 15-16 National Age Group records for the long course 200 IM and 400 IM, is part of several NAG-breaking relays with the Manta Rays, and holds the high school national record in the 200 free. Additionally, last year he made the senior USA National Team in the 200 IM and 400 IM.

All that to say, Foster was quite comfortable with his plan of sticking with Heis and the Manta Rays through the summer, had the Olympics been held this year. But once the Olympics and Trials, along with the rest of major competitions, were postponed, Foster started thinking that it would make sense to head down to Austin sooner rather than later.

“The decision was made easier by Ken helping me through the pros and cons and really being supportive of me heading down there. I also love the city of Austin and am dying to get down there,” Foster told SwimSwam.

While he can’t start training with the Longhorns right away, Foster plans on training at other sites locally until he can get started on classes and in the water with the Texas team. Swim clubs throughout Texas have slowly started getting back in the water over the last month, while the NCAA recently said that Division I teams could resume voluntary workouts starting June 1st.

No matter when he’s able to start training with the college team, Foster shouldn’t need too long to get too comfortable in Austin, as he’s already pretty familiar with a good chunk of the Longhorns team. His brother, Jake, just finished his freshman year at Texas, while Carson has been on USA Junior Pacs or Junior Worlds teams with Longhorns Drew Kibler, Daniel Krueger, Matthew Willenbring, and Peter Larson, as well fellow incoming freshman Ethan Heasley.

Historically, some swimmers have been reluctant to make the drastic change from living and training at home to heading to college in the year leading to the Olympics. In 2015, high school seniors Abbey Weitzeil and Katie Ledecky both decided to defer enrolling at Cal and Stanford, respectively, until after the Rio Olympics, and that seemed to work well for them. On the other hand, Townley Haas had a huge freshman year at Texas during the 2015-2016 season, becoming the first man to swim under 1:31 in the 200 yard freestyle, and then making the Olympic team in the individual 200 free, ultimately winning a gold medal as part of Team USA’s 4×200.

Good for him, might as well get started at college with all this uncertainty.

With his HS eligibility up, he can stay with any of his teammates or even a friend that lives by Texas. Plenty of clubs within 15min of campus that have families in the school area.

He will be sharing an apartment with his brother.