Cardinal Pick Up Williamson, Halsted For Class of 2013 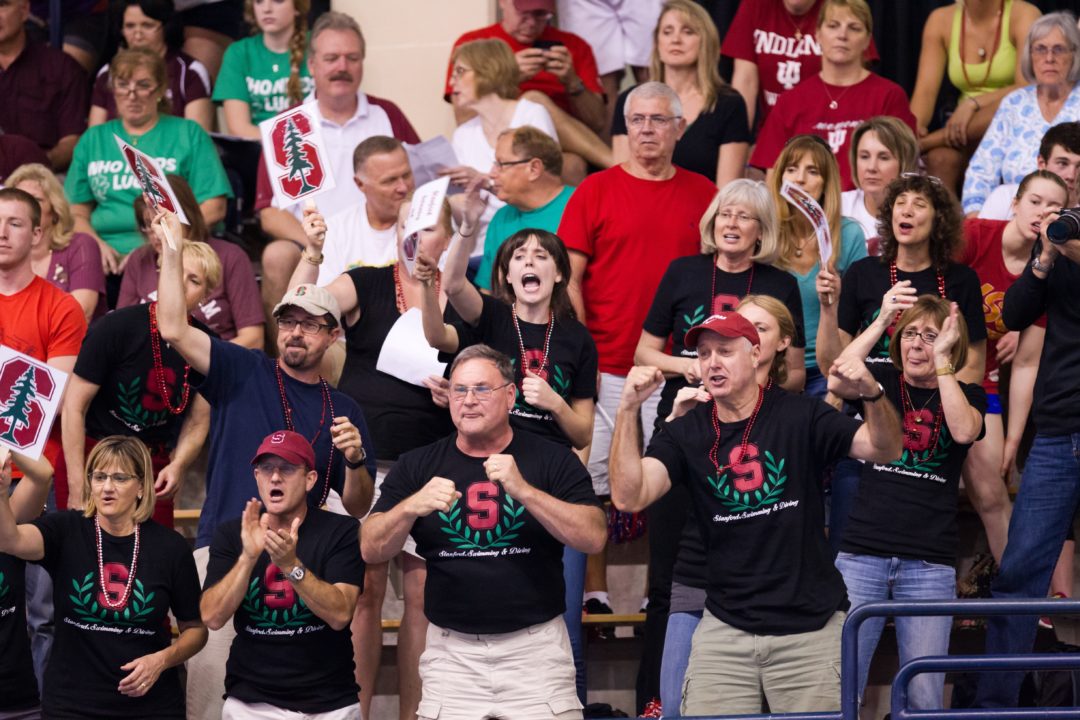 The Stanford Cardinal have taken over the recruiting headlines late this week. (Photo Courtesy: ©Tim Binning/TheSwimPictures.com)

Much like his older sister Ellen, a sophomore at Virginia, Williamson’s best events are the 200 backstroke and the the IM’s. There, in yards, he has bests of 1:47.10 and 1:48.74 in the 200’s, respectively, as well as a 3:49.19 in the 400 IM. Though Ted Knapp is taking over the program this year for Skip Kenney, he’s continuing the tradition of just this kind of athlete – they’ve put two swimmers (Matthew Thompson and Matthew Swanston) in the top 5 at NCAA’s in the 200 backstroke each of the last two seasons, and Thompson also leaned toward the IM’s instead of the shorter backstroke (he also scored in the 400 IM at NCAA’s last season).

His best time in the 400 IM would have placed him 4th at the Pac-12 Championships last year already (Stanford already had 4 of the top 6 in the race last year); he probably scores in the 200 backstroke at Pac 12’s as a freshman as well.

Halsted seems to have more speed than her top times indicate; she is the two-time defending champion in the 500 free in the underrated San Joaquin Section of California, but last year took that swim out pretty quick in a 55.3 (relative to her final time of a 4:55).

Not to oversell the young Halsted as compared to one of the best in the country, but she has a bit of a Maya DiRado vibe to her. DiRado is a great 200 backstroker (she was 2nd at NCAA’s last year), and a great IM’er, but she brings more speed to the Stanford team than most recognize. She was more developed than Halsted was coming out of high school, but it would seem as though the future freshman will have a good role model and training partner if Meehan prefers her as more of a 100/200 freestyler than 200/500 freestyler.

Also keep a lookout for Halsted’s little brother Torin in the next few years; she’s a sophomore in high school and a promising butterfly prospect.

Williamson is a good pick up and I agree that his breaststroke is arguably as good or better than his backstroke. That 2:15 LCM 200 breast and his earlier 1:59 SCY 200 breast shows his versatility.

Yeah you guys are right – I really glazed over that one. Shows just how great he could be in the 400 IM, ehh?