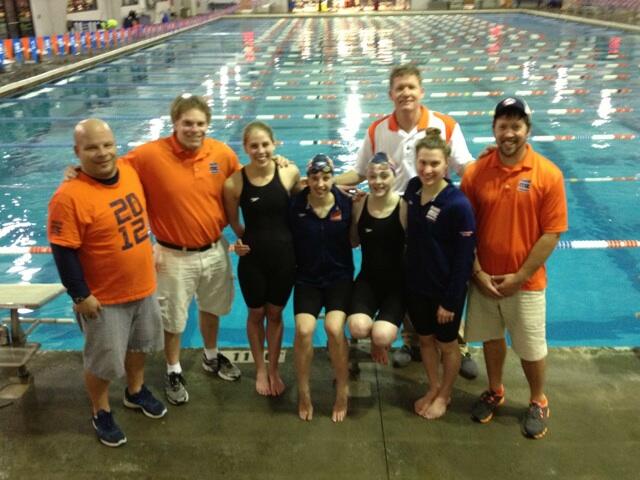 The record breakers in the 400 medley relay and their coaches from SwimMAC Carolina (Photo: Tim Binning/TheSwimPictures.com)

This time, the group was Kathleen Baker, Caitlin Casazza, Elsa Welshofer, and Nora McCullagh who combined for a 3:37.93 in the longer medley (the difference between the sprint medley and this 400 medley was Elsa Welhofer being swapped in on the butterfly leg). Just like they did earlier in the day, they broke a record held by an impressive group of names.

The record was previously broken by an NCAP relay at the Tom Dolan Invitational in early December. That group (Janet Hu, Brooke Malone, Kristina Li, and Katie Ledecky) was a 3:40.53.

This also broke the 15-18 National Age Group Record, despite how young they were, that was set just a few weeks ago at the Federal Way Sectional by the King Aquatic Club group of Hannah Weiss, Carolyn McCann, Heidi VanderWel, Ashley Sutherland.

This group from SwimMAC, then, demolished that old record by two-and-a-half seconds.

There have been a lot of good 15-16 relays in the past, but none has ever been as complete as this 400 medley relay is. There’s not a leg out of the four that doesn’t rank among the best in the country in the age group, and again McCullagh’s anchor shows that she is one of the really good young sprinters in the country.