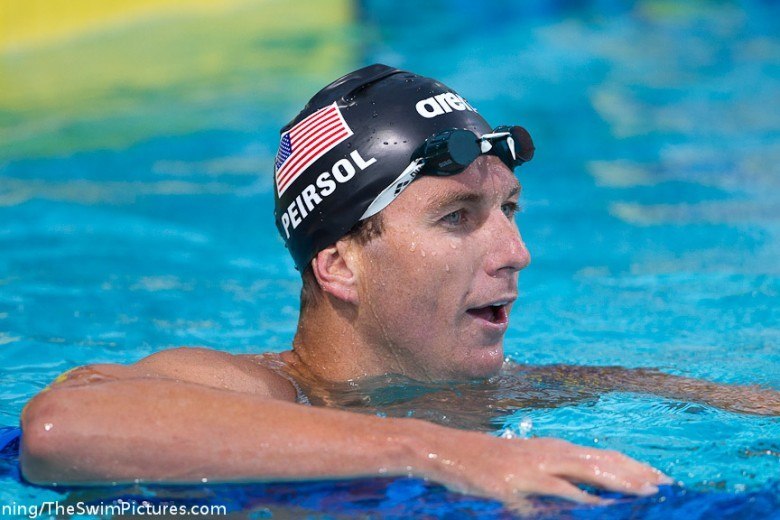 Among the LSC records broken was one belonging to Aaron Peirsol (pictured), the greatest backstroker of his generation. (Photo Courtesy: ©Tim Binning/TheSwimPictures.com)

While Short Course Worlds raged in Europe, USA Swimming rolled through it’s last round of major pre-holiday championship meets, among the most notable of which was the California/Nevada Short Course Yards Sectional meet held in Long Beach and hosted by the Golden West Swim Club.

Among the highlights of the meet was when Redlands Swim Team’er Kyle Gornay broke Aaron Peirsol’s Southern California Swimming Record in the 15-16 200 backstroke. Gornay swam a 1:44.57 to easily clear the 1:45.37 that Piersol swam back in 1999 while competing for NovAquatics.

He took second-place in the race behind 18-year old Sven Campbell from Orinda Aquatics. Campbell is a phenomenal freestyler and backstroker, committed to Cal next year, and won in a personal best of 1:43.88. Campbell will give Dave Durden’s men a backstroke group that will rival that that Teri McKeever’s on the women’s side. They could theoretically put at least three freshmen or sophomores in the top 8 at NCAA’s of the 200 next year.

All LSC records are impressive, but when a swimmer is able to break a Southern California record, it likely means that they’ve broken a mark held by someone verging on legendary (other names on the men’s 15-16 list include Vlad Morozov, Tom Shields, Mike Cavic, and Jeff Kostoff, to name a few).

That wasn’t the only record that Gornay broke though, nor was it even close to the oldest. He took the 200 free title in Long Beach in a 1:35.56 – a new Meet Record that also took down an LSC age group record of 1:36.19, set in 1990 by one Eric Diehl. Diehl made that swim in the same year where he made his international debut for the U.S., swimming at the 1990 Goodwill Games.

His Redlands High School teammate Sonia Wang, though swimming unattached here, had an impressive meet of her own. She’s only 15, but still managed to break the LSC 15-16 record in the 400 IM with a 4:10.83. That knocked two seconds off of a 2008 swim by Kirstie Chen that had been the old record.

In the 200 fly, Wang bested by a stroke Olivia Barker of the Sandpipers of Nevada, one of the top three butterfliers in the senior class of 2013, as well as USC swimmer Meghan Hawthorne and Li again.

Other stars of the meet included Justin Lynch of the Terrapins Swim team. He won the mens’s 200 fly easily in 1:45.18, which pushes him to 3rd all-time on the 15-16 200 yard fly list (behind only Phelps and more recently Joseph Schooling). It also gives him a Southern California Record. The old record was held by Young Tae Seo in 1:46.37.

That swim for Lynch, who is a NAG Record holder in 13-14, was a three-second drop from his previous personal best. He is still far from Phelps’ best, but is hovering over a different record: the 100 fly. In that race, Lynch won again in 47.27: just two-tenths from the time Mike Cavic swam at the same age (another former NovAquatics swimmer).

Osprey Aquatics swimmer Linnea Mack, coming off of an impressive Junior Nationals meet, picked up a few wins of her own. She won three events: the 50 free (22.55), the 100 back (53.37 from an outside lane), and the 200 free (1:48.19); while none of those were personal bests, she was very impressive in holding her taper over from the week before.

A pair of 15-year olds from the Sandpipers of Nevada, that state’s best team, also had breakout meets. Isabella Goldsmith won the women’s 200 breast in 2:14.48, was 3rd in the 100 free in 50.94, and was 2nd in the 200 free in 1:48.90. Her beaststroke skills were already well-known, but in the freestyles those were best times by more than two and four seconds, respectively.

Full meet results available here; note that southern Nevada, where the Sandpipers are located, is a part of the Southern California LSC.

Congratulations to Kyle Gornay……also note that Ryan Hart, also 16, of Greenwood Memorial Swimming went a 1:43.34 200 back to break Patrick Myers NE record…….Myers is not a legend like Peirsol but its a fast swim. This swim was at the NE Senior Meet last weekend. Also at that meet, Connor Green, also 16, from Bluefish Swim Club, went a 3:48.87 400 IM to break Jesse Vassalo’s record from 1981. That’s a legendary name in my opinion. Vassalo’s legend lives on NE since his pool record, set when NCAA’s were held at Harvard’s Blodgett pool, remains the pool record since Green’s swim last weekend was at the Boston University pool.