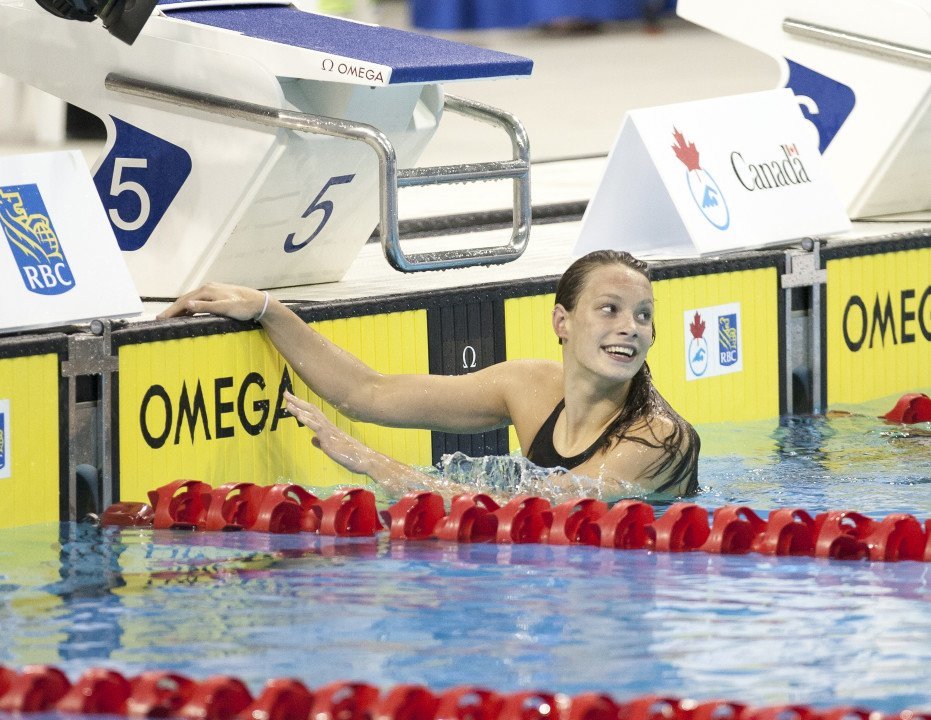 The IOC has confirmed that Canadians Penny Oleksiak and Taylor Ruck are the first two Olympic medalists ever that were born in the 2000s. Archive photo via Chris Tanouye

The International Olympic Committee (IOC) has confirmed that Canadian teenagers Penny Oleksiak and Taylor Ruck became the first ever Olympic medalists born in the 2000s, an incredible piece of history for the duo.

Oleksiak and Ruck both achieved this feat on Saturday night, winning bronze in the women’s 400 free relay along with Canadian teammates Chantal van Landeghem and Sandrine Mainville. The Canadians broke the national record in the prelims and the finals, ultimately finishing in 3:32.89 for 3rd behind the world record setting Australians and the Americans who set a national record of their own.

Oleksiak didn’t stop there, winning a silver medal in the 100 fly last night breaking her own junior world record and Canadian record that she established in the preliminary heats.

Oleksiak had a breakthrough Olympic Trials in April that saw her qualify in three individual events and three relays in Rio. She dropped the individual 200 free from her schedule, and is a perfect 2-for-2 so far in Olympic events in her young career with three more to go here in Rio. The Canadian women have a chance at a medal in both relays; the 100 free will be where Oleksiak’s greatest challenge is. But, her 52.72 anchor leg on the free relay proves she can compete with the best of them.

Ruck didn’t have the same conventional path to these Olympics, as she was hindered by an injury during the Canadian Olympic Trials and failed to qualify for the team per the automatic selection criteria. However, she was then added at the coach’s discretion as a relay alternate. She did well on her first opportunity, swimming fast enough in the heats of the 400 free relay to swim in the final and ultimately win bronze.

Ruck is expected to compete in the preliminary heats of the women’s 800 free relay Wednesday morning, and, if she goes fast enough, she’ll join Oleksiak in the final at night.

Congratulations to you & ALL of your team mates that helped you get to the final and give you a CHANCE to medal. Great result by EVERYBODY – You opened a few eyes on the other teams by your efforts in RUNNING them down!!
Great future guys & HAVE FUN once your events are over & enjoy a little time off from your FUTURE WORKOUTS by having a bit of fun in RIO!!