Can Australia’s Jack McLoughlin Make Podium in the 1500 Free?

Funky Trunks sponsored athlete Jack McLoughlin has already put in impressive performances in the 400 and 800 Free and now has his eyes on the 1500. Current photo via Funky Trunks & Funkita

With two World Championship finals already under his belt this week, Australian distance freestyler Jack McLoughlin has set himself up for a strong 1500m freestyle this Saturday in Gwangju, South Korea. He comes in as the 6th seed and the only Australian in the event.

McLoughlin finished 6th in a thrilling final of the 400m freestyle last Sunday with a time of 3:45.19, just off his heats time of 3:44.79 and a second outside his personal best of 3:44.20. In the 800m freestyle, after negative splitting his way to a personal best in the heats, he blasted a 7:42.64 in the final. The time smashed a further 3.78 seconds off his heats time and was good enough for 4th, McLoughlin’s highest World Championships finish to date. He beat both Gabriele Detti, the 2017 World bronze medalist and the recent 400 bronze medalist, and Sun Yang, who has been shunned by competitors this week after winning both the 200m and 400m freestyles. He also jumped to 3rd all-time in Australia, behind freestyle legends Ian Thorpe and Grant Hackett. 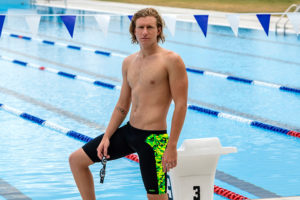 McLoughlin blitzed his Australian competition and is looking forward to his skills being put to the test against the best in the world.

This should be a massive confidence boost going into the 1500, arguably McLoughlin’s signature event. He has gone through a few years of highs and lows in this race: After qualifying for Rio with a time of 14:48.60, he just missed the Olympic final after swimming a 14:56.02 in the heats. He was 15:01.55 at the World Championships in Budapest the following year, again missing the final. In April 2018, he roared back to win gold at Commonwealth Games, clocking the 14:47.09 that remains his lifetime best. Since then, he has swum a 14:55.92 for Pan Pacific bronze, and a 14:52.83 at Australian Trials to qualify for these World Championships.

However, there are several other swimmers vying for a spot on the podium. Chief among them is Gregorio Paltrinieri of Italy, who won the last two world titles in this event as well as the Olympic gold medal. He has been 14:34.04, meaning he will be looking to break Sun Yang’s world record of 14:31.02 from 2011. After breaking 7:40 in the 800 and with Sun not even entered in the event, it would be an extraordinary upset if anyone else won the gold. Seeded ahead of Paltrinieri are Florian Wellbrock of Germany and Mykhailo Romanchuk of Ukraine – neither had a strong showing in the 800, as they came 17th and 8th respectively. Other highly seeded competitors include Daniel Jervis of Great Britain, Jordan Wilimovsky and Zane Grothe of the United States, and Jan Micka of the Czech Republic. David Aubry of France and Henrik Christiansen of Norway are perhaps greater threats, as they both dropped massive time to make the podium in the 800.

McLoughlin will swim in the third heat of the 1500m freestyle, this Saturday around 11:50 am Korean time. The finals will be contested the following day at 8:17 pm.

Check out Funkita on Swimoutlet here.

Funky Trunks and Funkita is a SwimSwam partner.