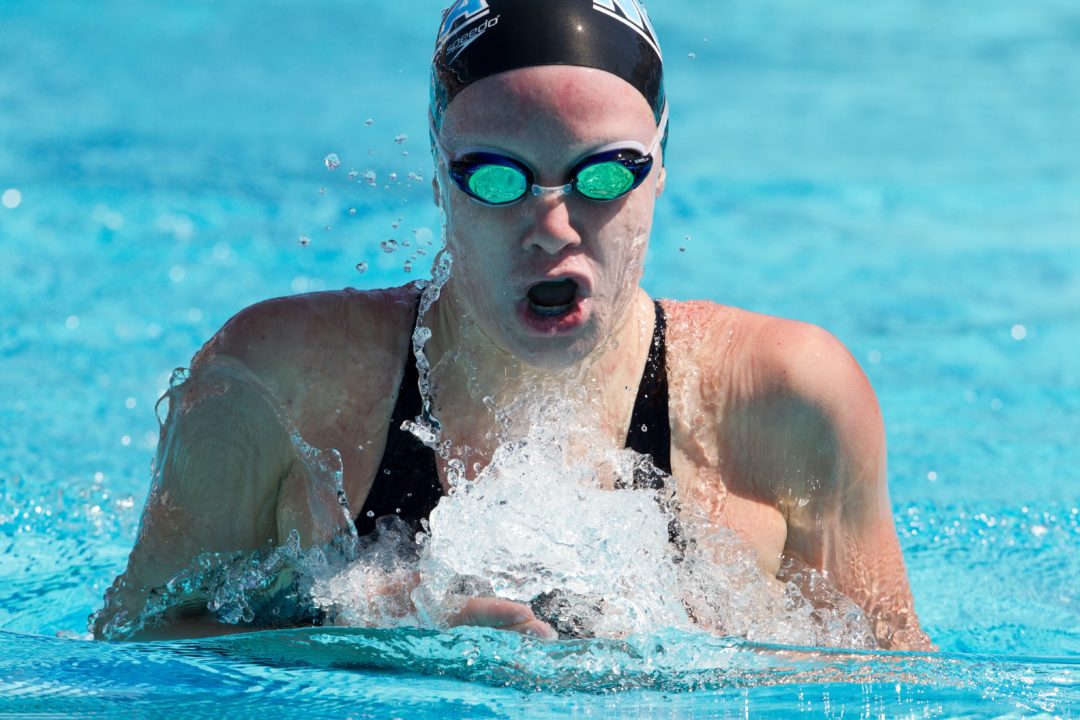 The depth and star-factor of the CIF Southern Sectionals championship weekend are unparalleled by any high school meet in the country. (Photo of Ella Eastin: Tim Binning/TheSwimPictures.com)

If you thought last year’s record setting CIF-South Section (aka, Southern California but not San Diego, basically) championship meets were exciting, recall how young those meets were: with several freshmen and sophomore champions and record breakers.

This year, the meets are a year older, and a year faster, and with fewer concerns about saving tapers for the Olympic trials, we’ve already seen some incredible results at League Championships leading into next weekend’s Section meets.

The South Section is split into four divisions, with Division I being the biggest and most powerful schools, and Division 4 being the smallest schools.

Full Psych Sheets, and eventually results, can be found here.

Jserra sophomore Katie McLaughlin will be looking to defend her title in the 100 fly, and given that she already broke the Orange County record at her league finals meet with a 53.27, about half-a-second better than she was at the Southern Section meet last season, don’t expect much of a challenge (though last year’s runner up, Brynne Wong from Corona del Mar, is also back for another shot.)

McLaughlin will also be shooting to improve on her runner-up finish in the 200 free from last season. She’s been a 1:47.68 and is the top seed, but isn’t the only stud sophomore in that race. Woodridge’s Daniela Georges, who comes in seeded 4th in 1:50.13, actually beat McLaughlin in that event last year.

McLaughlin’s teammate Kaitlyn Albertoli, yet another sophomore, is the second seed in the 50 free in 22.91 behind another sophomore: Abbey Weitzeil from Saugus. Weitzeil has been training with sprint guru Coley Stickels since January, and has already seen huge gains in long course. She has a legitimate chance as a sleeper pick for Worlds in the 50 free, though, so maybe she isn’t fully tapered for this high school season (especially with two more years to go.)

Other huge names on the women’s side include Capistrano Valley junior open water swimmer Brooke Lorentzen, and Foothill freshman backstroker Courtney Mykkanen. Mykkanen is uber talented, however to win the 100 back she’ll have to knock off defending champion Cheyenne Low, a senior at University High who make a huge leap seemingly every year.

On the boys’ side, the star is University junior Corey Okubo. He’s easily the top seed in the 200 IM with a 1:48.02, and is part of a huge battle in the 100 fly. That battle includes National Age Group Record holder Kyle Gornay from Redlands (top seed in 48.31), sophomore Alex Valente from Dos Pueblos (48.65), Okubo (48.89), and last year’s runner-up Michael Chang, a senior from Northwood.

Gornay won’t swim the 200 free, where he holds a National mark for 15-16’s at the club level, and instead is the top seed in the 100 back with a 50.17. That’s another race with a lot of youth; the top 5 swimmers are all underclassmen, including Edison sophomore Thomas Smith (2nd – 50.50) and University sophomore Daniel Tran (3rd – 50.55). Notably, Edison is 100 backstroke NCAA Champion Cindy Tran’s alma mater; Daniel is not related to her however.

The men’s 500 free will feature national level open water swimmer, and Tennessee commit, David Heron from Mission Viejo High, who is the top seed in 4:22.86. He should race unchallenged here, but there is an incredibly talented young freshman named Brad Gonzales who at his league meet was a 4:28.18 as the second seed. That broke the Southern California Swimming record for 13-14’s in the 500 free by two seconds. That’s a record that was held by California legend Tom Shields.

In the Division II meet, the undeniable star is Upland sophomore Sonia Wang. She will be looking to defend both the 200 IM and 100 butterfly titles, moving to a perfect four-for-four in her career, and is a heavy favorite in both. In the 200 IM, she comes in seeded at 2:01.18. Watch out for Ayala junior Ashley Tse, though, as she’s wont to put up some outstanding drops at this meet.

The 100 fly should be less contested after Wang was a 54.28 at her League Championship meet. She’s chased by four freshmen as the next four seeds behind her, with only one senior seeded in the top 10.

She has been 1:59.0 and 53.0, respectively in December of this season at Winter Sectionals, so some records could be toast in Division II.

On the men’s side of Division II, Young Tae Seo is the top seed in the 200 IM in 1:49.77. Seo is a top 10 recruit who was committed to Florida, but then decided he’d take a year to attend the Peddie Prep School before applying for admission at the Naval Academy instead. He’s seeded at a 1:49 in the 200 IM, but has been 1:47 low. He and Crescenta Valley teammate Harrison Thai are the top two seeds in that race.

In Seo’s other event, the 100 breast, he’ll run into Arroyo Grande junior Zach Stevens. Seo has won the last two titles in the race and is the Division II record holder with a 55.81 from his sophomore year. Consider, though, that last year Stevens was the runner-up in 57.0;  this season he’s already been 55.8 (faster than Seo’s winning time last year, and just .03 off of the record.

This men’s meet is incredibly deep; for example, that men’s 100 breaststroke has 10 swimmers seeded under a minute. The men’s 50 freestyle has 12 guys seeded under 22 seconds. That’s unreal, and that’s just the second tier of schools (size wise).

Taking a page out of Olivia Smoliga’s playbook, Engel is using her junior season to focus on some big sprint times ahead of recruiting season. That means she’ll bypass the 100 backstroke where she won last year and set the D3 record (much like Smoliga did as a junior before breaking the National High School Mark in 2012 as a senior.)

Crean Lutheran has two years of incredible relays ahead of them, especially with the younger Eastin sister, freshman Emily Eastin, joining her sophomore sibling Ella Eastin this year. Emily is the top seed in the 100 backstroke, with Engel’s absence, in 58.97, and the only swimmer seeded under a minute.

Ella is the second seed in the 500 free in 4:55.37, just two tenths behind Poly/Riverside senior Lindsey Clary (the younger sister of Olympic gold medalist Tyler Clary). Ella is also the top seed, defending champion, and record holder in the 200 IM with a 2:01.40 – six seconds ahead of the second-seeded Clary.

The biggest story in Division 3 is the absence of Mark Keppel High School. The Aztecs, who moved up into Division 2 this year, had won the last three girls’ titles and the lest two boys’ titles. The girls from Crean Lutheran will win a lat of races, but they’ll be fought the whole way by La Serna and Laguna Beach on depth for the overall team battle.

In Division 4, the smallest schools on the lineup, Cerritos sophomore Angel Alcala is the top seed in both the 100 fly (52.50) and the 100 back (54.36). He is matched in those races by Kailee Mora from Citrus Valley, who has the top seed in the same women’s events.

Braden, Do not forget about the North. In league action just this weekend we have already seen Ally Howe go 22.8 50 and 53.3 100 Back with a 24.8 50 back lead off on the medley. Andrew Liang was 20.5 and 47.8 100 fly breaking Mark Spitz’ league record. That does not include Curtis Ogren and all of the great North Coast swimmers I.e. Chelsea Chemault. Madison White, Steven Stumph, Jackson Miller etc…
While the Southern Section will undoubtedly be fast, the north will hold it’s own

Minor correction- Thomas Smith is a sophomore, not a freshman.
I’m wondering if Brad Gonzales will be able to pull something huge here like he’s been able to do his last few meets.

Always amazing for me to see you still swim in yards in USA in May! It’s really weird. I hope for some of these swimmers they save their taper for world trials next month like Katie McLaughlin or Chelsea Chenault.

CIF has its swimming finals late in the year compared to many other areas in the US. My understanding is that a good number of higher level swimmers may “rest” a bit but not fully taper for CIF finals
Given the depth of talent mentioned CIF finals should be a collage coaches recruiting bonanza.
It will be interesting to see which coaches actually come see the swimmers, have a conversation and make a judgement based on personal observation. A great deal of information can be gained by observing first hand what a swimmers looks like in terms of potential and maturity.

CIF is late in the collegiate recruiting process wrt the following season. Usually the coaches there are looking for soph and junior level talent with the exception of the rare senior that has come out of nowhere and still on the recruiting plate

Last year there was a coach or two from USC, USCB, UCLA, ASU, BYU, and Wyoming in attendance but the largest contigent present appeared to be the Univ of Utah.

The author meant La Canada, not La Nacada. Some of the schools listed really haven’t historically been powerhouses, and don’t forget Edison HS with always good talent and home to Tom Shields and Cindy Tran.

Katie McLaughlin like to see under 53, the college will really pay attention and she doesn’t need to save it for summer, she’s young.