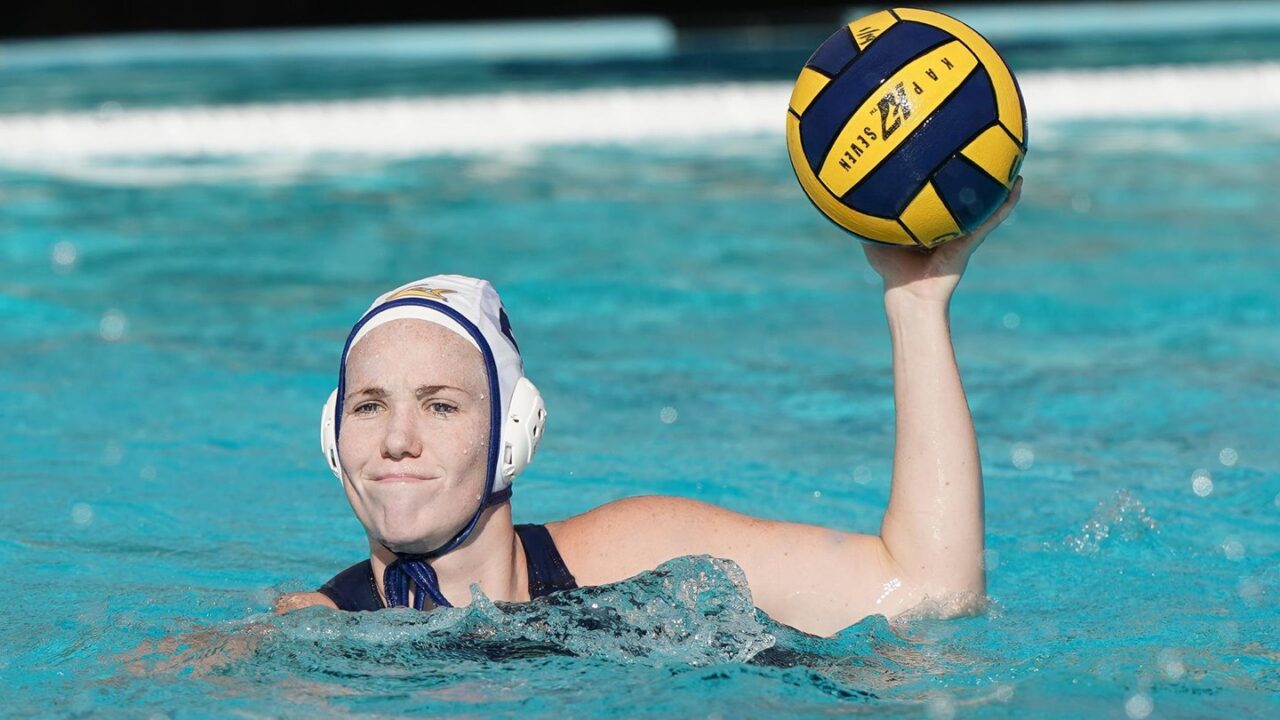 The Bears went 4-0 for the weekend, with each victory coming against top-10 teams. Current photo via Catharyn Hayne

The Trojans fought out of a four-goal hole with help from a four-goal effort from Paige Hauschild, but the Cardinal ultimately prevailed 11-9.

TEMPE, Ariz. – Three-time All-American and 2020 Dutch Olympian Kitty Lynn Joustra scored four goals and Emma Wright added a hat trick in her return after a two-year layoff, and the No. 5 Cal women’s water polo team turned back No. 8 Michigan 12-8 on Friday morning on the first day of the season-opening Cross Conference Challenge at Arizona State’s Mona Plummer Aquatic Center.

Cal dominated the Wolverines for much of the morning, rolling out to a 9-2 lead with 5:51 left in the third quarter. The Bears still held an 11-4 advantage with just over two minutes remaining in the third before Michigan inched closer.

Junior Cecily Turner and sophomore Ruby Swadling each also added two goals for Cal, while junior goalie Isabel Williams made nine saves. It was also Swadling’s first game for Cal since being named to the MPSF All-Newcomer Team and earning All-MPSF honorable mention as a freshman in 2020.

Wright, also a three-time All-American and 2020 Olympian for Canada, missed both the 2020 and 2021 seasons for Cal while she trained with the Canadian National Team. Friday marked her first game for the Bears since the semifinals of the 2019 NCAA Championship, a span of 986 days.

“I definitely had some nerves going into my first official game back as a Cal Bear,” Wright said. “I wanted to start my final season off on a good note, and I think we did exactly that. I’m very excited for this season.”

Swadling added three steals, two field blocks and an assist while Turner had two steals, an assist and a field block.

The Bears started quickly, scoring the game’s first three goals – with two coming from Wright – in less than three minutes. After the Wolverines cut the lead to 4-2 early in the second quarter, Cal scored five in a row to take command.

“We wanted to come out strong and sustain our mental and physical toughness for as many quarters as possible,” said head coach Coralie Simmons, who commenced her sixth season at Cal on Friday. “It’s a good start to an exciting year of water polo. We have room to grow and an edge to sharpen.”

Cal resumes play in the Cross Conference Challenge on Saturday with games against No. 4 Arizona State and No. 10 Fresno State.

TEMPE, Ariz. – Sophomore Ruby Swadling registered four goals and six assists and the No. 5 Cal women’s water polo team continued its impressive opening weekend with victories over No. 4 Arizona State and No. 10 Fresno State on Saturday at the Cross Conference Challenge.

The Bears (3-0) made a strong statement with a 17-7 victory over the Sun Devils in the morning and then followed up with a 12-8 win over the Bulldogs later in the day. It was the most goals Arizona State has allowed in a game since 2015 and the most at home since 2009.

Cal got off to a terrific start against the Sun Devils, establishing a 5-1 lead at the end of the first quarter. Arizona State climbed back to within 6-3 with 5:07 left in the second quarter, but the Bears reeled off three goals in succession to take command. After leading 10-5 at halftime, Cal scored the first three goals of the third quarter to blow the game open.

The first quarter against Fresno State was back and forth, but after the Bulldogs scored to cut the Bears’ advantage to 4-3, Cal strung together five goals in a row to lead 9-3 late in the first half. Fresno St. cut it to 11-7 with just over six minutes remaining, but the Bears’ defense did the job the rest of the way.

Freshman Rozanne Voorvelt scored the first three goals of her career and added two field blocks during the day, while fellow freshmen Emma Singer and Alex Higginson also found the back of the cage for the first time.

Cal closes out play in the Cross Conference Challenge on Sunday morning against No. 7 UC Irvine.

TEMPE, Ariz. – The No. 5 Cal women’s water polo team capped off a dominant weekend at the season-opening Cross Conference Challenge with a 16-8 victory over No. 7 UC Irvine on Sunday at Arizona State University.

“Everyone came in really excited and focused on the weekend, and wanting to get better throughout,” Cal head coach Coralie Simmons said. “We wanted to come out and play some quality water polo after a solid fall season.”

Three-time All-American and 2020 Olympian Emma Wright scored five goals to move into seventh place on Cal’s all-time scoring list while sophomore Ruby Swadling polished off an impressive weekend with three more goals of her own, as the Bears outscored their opponents 57-31 during the tournament.

Wright, who returned to Cal this season after taking two years off to train with the Canadian National Team, scored 11 goals during the four games and now has 165 in her career. She needs eight more goals to take over the No. 6 spot on the program’s all-time list.

Swadling, a member of the 2020 MPSF All-Newcomer Team who opted out of last season, had nine goals, eight assists and three steals during the weekend.

“Ruby is just a consistent teammate and performer for us,” Simmons said. “She’s not flashy but she definitely makes big contributions for us on both ends of the pool. She’s just a smart player that other teams are going to have to figure out how to guard. Her attention to detail allows us to function at a high level.”

The Bears led 4-3 at the end of the first quarter before netting five of the next six goals to open up a sizable lead. UC Irvine was still in striking distance down 10-7 midway through the third period, but Cal then registered four more goals in a row to put it away.

The Bears had 14 different players score goals over the weekend.

“Having confidence in any unit going in is going to be essential for us to attack with a wave of different lineups,” Simmons said. “This is a team that really prides itself in having everyone contribute in a big way. That’s going to continue to be a big focus for us moving forward.”

Cal also defeated No. 8 Michigan, No. 4 Arizona State and No. 10 Fresno State during the tournament.

The Bears open their home season next weekend by hosting the Cal Cup at Spieker Aquatics Complex. Cal will take on No. 10 Fresno State and No. 13 Pacific on Saturday and No. 12 Long Beach State and No. 16 San Jose State on Sunday.