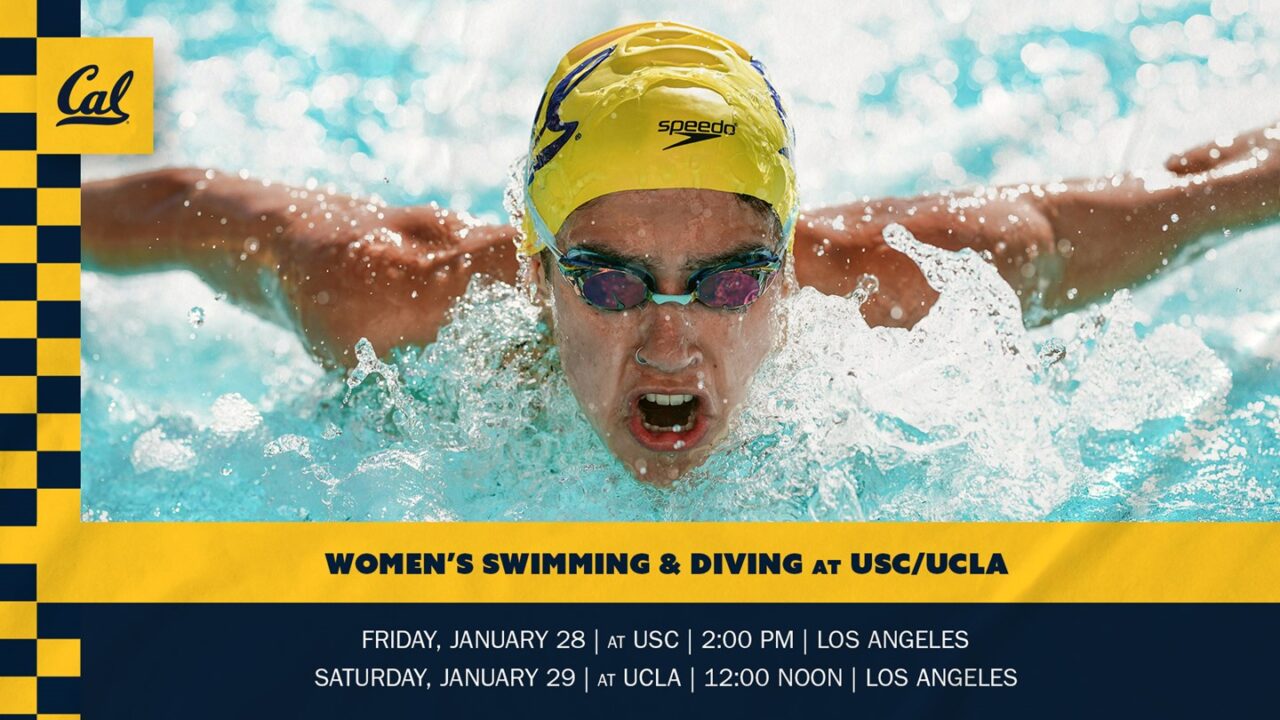 The Bears will visit USC on Friday and UCLA on Saturday. Current photo via Cal Athletics

Cal takes to the road this week, traveling to Los Angeles where the Golden Bears will face USC at 2 p.m. on Friday and UCLA at 12 noon on Saturday. Last year, Cal hosted both schools in two-day duals over the course of three days. The Bears defeated USC, 207-119, on Jan. 29-30, then topped UCLA, 218-119, Jan. 30-31 – the first scoring competitions of a pandemic-shortened dual-meet season. All-time, Cal holds a 26-16 series edge over USC and a 30-10 advantage over UCLA.

LAST TIME OUT – BEARS SWEEP ARIZONA, ASU: In its first dual meets of the new year, Cal defeated No. 23 Arizona, 153-92, and Arizona State, 162-93, last weekend at Spieker Aquatics Complex in Berkeley. Isabel Ivey won five different individual races in four different events – free, fly, back and IM – over the two days to pace the squad. As a team, the Bears captured 24 of 28 races with 13 swimmers earning at least one individual victory.

BEARS NAMED A CSCAA SCHOLAR ALL-AMERICA TEAM AGAIN: Cal has earned Scholar All-America team status from the College Swimming and Diving Coaches Association of America (CSCAA) for its fall academic performance for the 24th semester in a row – or every time the award has been presented. Individual awards will be presented in the spring. All time, 87 Golden Bears have received Scholar All-America recognition a total of 154 times, including 11 four-time honorees.

IVEY NAMED PAC-12 SWIMMER OF THE MONTH: Senior Isabel Ivey was named the Pac-12 Swimmer of the Month for December after a stellar meet at the Minnesota Invitational Dec. 1-4. She won two events (200 free, 1:43.13; 200 IM, 1:53.90), placed second in another (100 free, 47.57), and helped all five relays earn NCAA automatic qualifying times. Ivey’s individual times put her third in the country in the 200 free and 200 IM and fourth nationally in the 100 free. She is the reigning Pac-12 Swimmer of the Year and anchored Cal to an NCAA championship in the 200 free relay last March.

STADDEN, WEITZEIL COMBINE FOR 7 MEDALS AT SHORT-COURSE WORLDS: Cal sophomore Isabelle Stadden and alum Abbey Weitzeil combined for seven medals at the FINA Short-Course World Championships in Abu Dhabi Dec. 16-21. Stadden claimed a bronze medal in the 200m back (2:02.20), while Weitzeil tied for Team USA honors with six medals among her 10 top-10 finishes – two gold, three silver and a bronze. He top individual result was a bronze medal in the 100m free, with the other medals coming in relays.