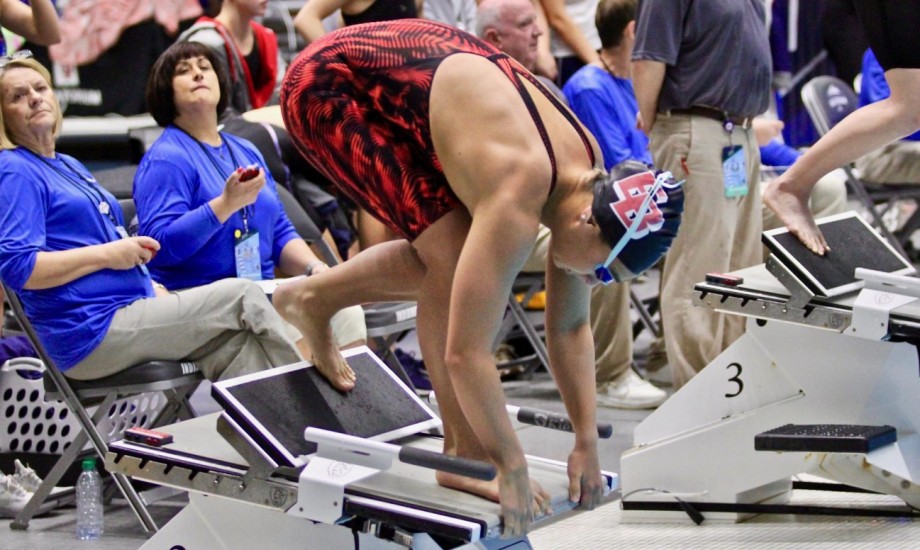 At the halfway point of the meet, Cal State East Bay has moved into first for the women, while the UC Santa Cruz men held onto the lead. Current photo via Pacific Swim and Dive

MONTEREY PARK, Calif. — The 2020 PCSC Championships continued Thursday at East LA College with eight more events, highlighted by the 200 freestyle relay. At the halfway point of the meet, Cal State East Bay and Pepperdine leapfrogged Azusa Pacific to move into first, second and third, respectively, on the women’s side, while the UC Santa Cruz men held onto first place with Biola and Concordia closing down the gap in second and third, respectively.

The women’s 500 free kicked off the finals session on Thursday as Biola’s Kellynn Hayes earned her first title of the meet with a 0.28-second victory over Cal State East Bay’s Leah Robinson, who narrowly out-touched her teammate Serene Augustain in third. The two combined to collect 55 points in the event, setting the tone for the rest of the session for the Pioneers.

The men’s 500 saw Concordia’s Kyle Benjamin repeat as the champion in a time of 4:31.67. UC Santa Cruz’s Sam Smith—winner of Wednesday’s 1,000 free—took second and Biola’s Gabe Weber claimed the final spot on the podium.

The meet changed gears to the 200 IM where Olga Tovstogan claimed Fresno Pacific’s second women’s title of the meet and her second straight championship in the event, missing the meet record by just over a second with her time of 2:02.75. Biola’s Katelyn Harper was the runner up in 2:06.12, out-touching Pepperdine’s Julianna Birlin (2:06.15) by just three-hundredths of a second.

The sprinters were up next in the pool and the women’s A final demonstrated the strength of the competition as just 1.14 seconds separated the winner — FPU’s Arianne Kooijinga (23.28) — from seventh place — a dead heat between Pepperdine’s Jasmine Williams and East Bay’s Isabel Rishwain (24.42). The Pioneers’ Allie Klinger finished just one-hundredth of a second behind Kooijinga, narrowly missing out on back-to-back titles, while Concordia’s Katelyn Thomas joined them on the podium in third.

The men’s 50 free saw Fresno Pacific miss sweeping the podium but just 0.13 seconds as Iskender Baslakov (20.27) collected his second straight title in the event and Dmitry Belolipetskiy (20.42) finished second. Concordia’s Austin Barton (20.65) beat out the Sunbirds’ Oleksandr Ivakin (20.78) to a spot on the podium, preventing an FPU sweep.

The 200 free relays capped Thursday’s competition and, on the women’s side, Pepperdine won its second of three relays so far at the meet. After claiming the 800 free relay title on Wednesday, the Waves were back at it again in the 200. Their team of Williams, Birlin, Jenna Sanchez and Amy Griffin finished in 1:34.43 to take the championship and claim a crucial 64 points to finish the day in second place in the team standings. Not far behind were the Pioneers (Klinger, Rishwain, Augustain, Robinson), who took second in 1:35.07 just two-tenths of a second ahead of the Sunbirds (Kooijinga, Ioanna Palla, Meghan Go, Tovstogan) in third.

Prelims are set to begin at 9:30 a.m. with diving finals set for 3 p.m. and swimming finals starting at approximately 5 p.m. at East LA College in Monterey Park. The meet will be livestreamed via Take It Live here. For more information about the meet, click here. You can find individual team recaps of Day 2 below.