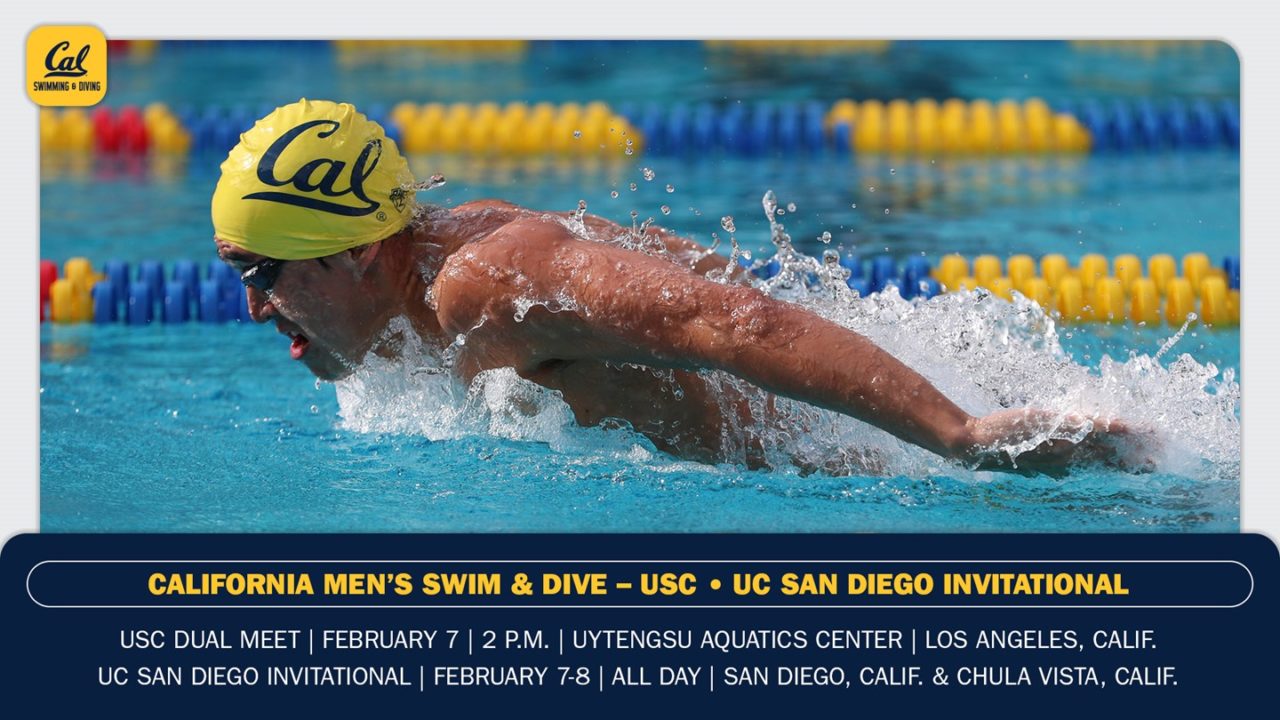 California men’s swimming and diving will take a split-squad approach in SoCal this weekend when the Bears clash with USC and UC San Diego on Feb. 7-8. Current photo via Cal Athletics

BERKELEY – California men’s swimming and diving will take a split-squad approach in SoCal this weekend when the Bears clash with USC and UC San Diego on Feb. 7-8 in three different locations.

One group of swimmers as well as the Cal divers will challenge USC in a Pac-12 Conference dual meet at 2 p.m. (PT) on Friday, Feb. 7 in Los Angeles while a different group of swimmers will face the Tritons in San Diego at 3 p.m. (PT) the same day. Following Friday’s competitions, Cal’s entire team will regroup for a non-scoring, long course meet against UC San Diego at Southwestern College in Chula Vista on Saturday, Feb. 8 at noon.

Results for both of Friday’s competitions will be available on Meet Mobile.

Cal is ranked second nationally with 288 points in the latest CSCAA Coaches Poll (Jan. 22). The Bears trail top-ranked Texas by only 12 points.

California set four pool records in the 200-yard medley relay, 100 breaststroke, 200 breaststroke and 400 individual medley on the way to a 160-119 dual meet victory over Arizona State on Senior Day at Spieker Aquatics Complex on Jan. 25. The Bears improved to 3-0 in dual meets this season and has won nine consecutive dual meets since Oct. 3, 2018.

Sophomore Reece Whitley stole the show by breaking the 100 breast (52.77) and 200 breast (1:53.65) pool records in addition to swimming a 23.85 split on the second leg of the Bears’ pool record swim in the 200 medley relay (1:25.14). Junior Daniel Carr and seniors Pawel Sendyk and Michael Jensen joined Whitley on the 200-medley relay. Redshirt sophomore Hugo Gonzalez recorded Cal’s fourth pool record of the afternoon with a 3:44.51 finish in the 400 IM. With Cal having already clinched the dual meet victory at the time of the 400 IM, Gonzalez swam the event as an exhibition.

In the final home meet of his career, senior diver Connor Callahan excelled on the boards with an NCAA Zone Championship-qualifying score of 324.75 in the 3-meter. He added a 309.00 score in the 1-meter, which marked a season-best.

Cal was named a Fall 2019 Scholar All-America Team by the CSCAA on Jan. 29. The recognition marks the fourth time in the last five semesters that the Golden Bears have earned Scholar All-America Team honors. This year’s squad, led by head swimming coach David Durden and head diving coach Derek Starks, posted a 3.19 grade point average (GPA) during the fall 2019 semester.

The Bears will get their final tune-up for the postseason against Stanford on Feb. 22 at noon. The meet will be streamed live from Stanford’s Avery Aquatic Center.