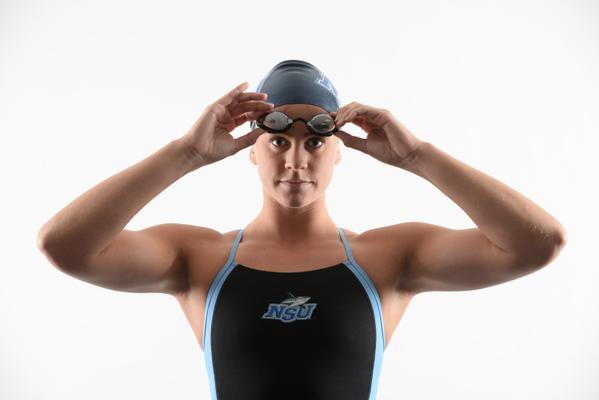 Nova Southeastern freshman Bryndis Hansen and Drury sophomore Wen Xu both looked poised to break Ana Azambuja of Wayne State’s 50 freestyle record of 22.54 after just missing it by less than a tenth of a second this morning.  Hansen led from start to finish punching the wall at 22.53 to dip under Azambuja’s record by one one-hundredth of a second. Xu (22.66) could not close as hard as she had in the morning touching second with Debbi Lawrence (22.79) of NMU touching third.

The Icelandic native seems to be adjusting well to her training with the Nova Southeastern Sharks after starting off her season at the All-Florida Invite posting a 23.91 in the 50 freestyle.  There didn’t seem as though much progress was being made until the Nova Invitational where Hansen led off her 200 freestyle relay touching at 23.01.  It wasn’t until the SSC Championships that Hansen broke 23 seconds and put her name into the mix for her eventual NCAA title in the 50 free

Xu and Hansen will meet again later this weekend in the 100 free where they are ranked 1st and 2nd for the saturday session.  Expect for both to be gunning to break through the 49 second barrier and take a couple shots at Azambuja’s 100 freestyle record.