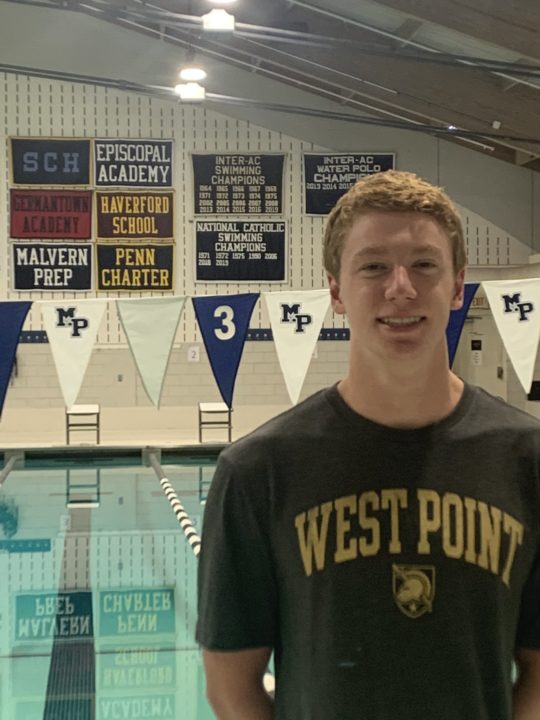 Ryan Durkan, a senior at Malvern Prep School in suburban Philadelphia, has committed to join the swimming & diving team at Army-West Point.

Durkan, who learned to swim in the Malvern pool, leaves the program as the fastest breaststroker in school history at a program that produced athletes like three-time Olympic silver medalist Tim McKee.

So proud of this guy! Congrats Ryan Durkan on your verbal commitment to the United States Military Academy at West Point as swimming Cadet Class of 2025! He learned to swim in Malvern’s pool and he will leave us as the best breaststroke swimmer in school history! Go Army! pic.twitter.com/9erJRy2uav

A good breaststroker already as a freshman in high school, Durkan’s improvements in the 200 IM over the last 2 seasons have really upped his value as a three-event contributor for the Black Knights.

In addition, Durkan split 25.18 on the breaststroke leg of a 200 medley relay at Easterns earlier this year.

He is a Winter Juniors qualifier, based on 2019 standards, in both the 100 and 200 breaststrokes.

Durkan should be an immediate-impact for Army-West Point when he arrives next season, already holding times in both the 100 and 200 breaststrokes that would have been solidly in the B-final of last year’s Patriot League Championships.

The breaststrokes have been historically an area of strength for Army-West Point. For example, at last season’s Patriot League Championships, the team had 3 of the top 6 finishers in the 100 breaststroke.

This is an area where Army-West Point is able to hold serve against a powerful Navy team, who topped Army-West Point by 374.5 points to win their 16th-straight Patriot League Championship.

The story in the 200 breaststroke is similar, where Army sophomore Evan Zhang won the conference title in 1:55.80, out-pacing a trio of Navy swimmers behind him.

He joins a fast Army recruiting class that includes Evan Yoo, George Glover, James Don, Ian Shahan, and Jackson Pogue. Of that group, Yoo is also a breaststroker, boasting best time of 55.9 and 1:59.5 in the 100 and 200 yard distances.

This young man is a solid pickup for Army! Congratulations Ryan! You have another great family waiting for you!!