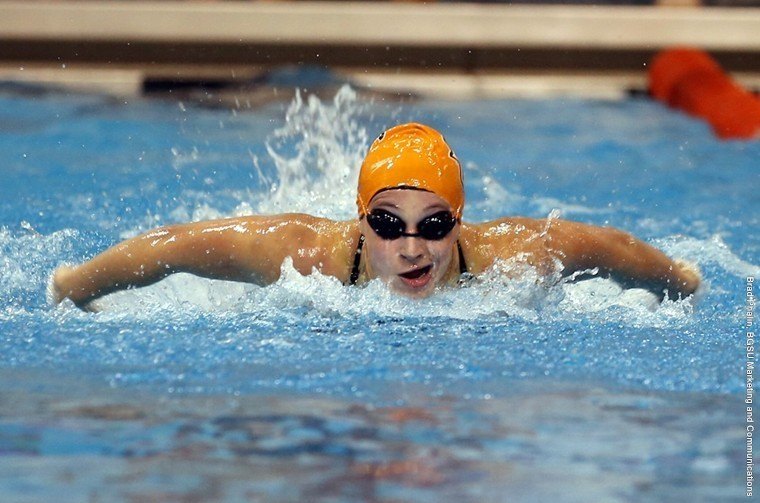 Freshman diver, Talisa Lemke, claimed the win for the Falcons in both the 1-meter and 3-meter diving events. Already qualified for NCAA Zones, Lemke scored a 321.75 and a 282.60 respectively to take the wins. Also an NCAA Zones qualifier for BGSU, is sophomore Claire Stam, who scored a 232.88 and a 251.10 in the 3-meter and 1-meter diving events respectively to help the Falcons win the meet.

Also making an impact were seniors Maya Skorupski and Victoria Griffin, who won two individual events each for the Falcons. Skorupski won both the 100 and 200 backstroke, touching the wall at 56.66 and 2:03.34 respectively to take the wins. Griffin claimed first place for the orange and brown in both the 50 and 100 freestyle. The senior stopped the clock at 24.01 and 51.93 respectively. The 200 individual medley was also won by a Falcon, only this time it was Kristin Filby‘s turn. The senior the event by over two seconds, touching the wall at 2:08.46 to leave the rest of the competition behind.

The Falcons will be back in action on Friday, Nov. 11 in Cooper Pool, starting at 6 P.M. Come cheer on your Falcons as they host Big Ten Conference team, Michigan State University.

Freshman Rachel Smallwood made the NCAA Diving Zone cut and moved into fifth place in school history with her score of 275.03 in the 1-meter dive.

Freshman Peighton Gilbert finished second in 50 freestyle at 24.53. She was also part of the second place finish in the 200 freestyle relay and third in the 200 medley relay.

“We really executed and really raced today,” said head coach Kristy Patterson. “The energy was really up and there were a lot of things we did well. There are still a lot of things we can do better tomorrow and next week when we compete, but definitely some great things happened today.”

The Cardinals take on Tiffin at home tomorrow in a co-ed meet beginning at 1 p.m. Tomorrow’s meet can be watched live on Ball State Sports Link Facebook Live and on BallStateSports.com: www.facebook.com/bsusportslink

After this weekend, Ball State will travel to Normal, Ill. to take on Illinois State on Nov. 11.

For the most up-to-date news on the Ball State women’s swimming and diving team, please follow @BallStateSports and @BallStateWSwim.