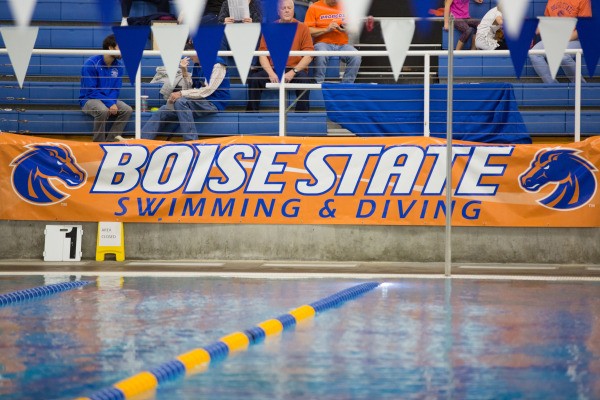 FLAGSTAFF, Ariz.  – Boise State swim and dive returned to action Friday evening winning the first of two dual meets at Northern Arizona as the Broncos claimed a 73-56 victory. Boise State won four of the eight events competed on the day highlighted by individual wins by Molly Hogg and Beatriz Zoppei, as well as two relay victories.

The meet opened with the Broncos winning the 400-yard medley relay with its A team featuring Hogg, Carly Palmer, Zoppei and Robin Pinger. The winning time for the Broncos was 3:44.17. Boise State’s B team (Madesyn Ronquillio, Anahi Schreuders, Emma Segneri and Brittany wen) came in third clocking a 3:48.99.

Boise State dominated the 50-yard butterfly claiming four of the top five places led by Zoppei’s winning time of 25.10. Emmie Jennings placed third with a 25.46, followed by Lauren Vitort (25.65) in fourth and Ronquillio (25.84) in fifth.

The Broncos also claimed three of the top four spots in the 50-yard backstroke with Hogg bringing home first-place with a 25.96. Tina Andrasek came in second recording a 26.44, while Jennings placed fourth with a 28.42.

The final race was the 800-yard freestyle relay where the Boise State A Team of Hayley Hill, Lucia Davis, Emma Brady and Madison Frederick recorded the winning time of 7:33.40.  The Broncos’ B Team (Katie McCoy, Ally Schultz, Jamie Nats and Palmer) placed third clocking a 7:42.64.

The victory improved the Bronco’s record in duals to 4-2. Boise State and NAU will return to the pool for a second dual meet Saturday morning at 10:30 a.m. (Mountain) in Flagstaff, Ariz. This meet will see more of the traditional races during the final dual of the weekend.

LAGSTAFF, Ariz. – Hayley Hill and Katie McCoy recorded two wins apiece to lead Boise State to its second road victory in two days over Northern Arizona with a 157-143 win on Saturday. In all, seven Broncos accounted for nine wins out of 17 events.

The victory improved Boise State swimming and diving to 6-2 overall in duals. The Broncos have one dual remaining in the season, that coming next Saturday (Feb. 1) when they host Washington State for Senior Day at the Boise West Family YMCA and Boise City Aquatic Center at 10 a.m.

“We are really excited about how the team performed this weekend,” said head coach Christine Mabile. “They made some important strides to move us up in the conference. The majority of our swims were season bests and that’s exactly where we want to be going into championship season.”

Sophomore Katie McCoy tallied a pair of wins as well on Saturday taking the 200-yard backstroke by clocking a time of 2:03.95. McCoy then claimed first-place in the 200-yard individual medley recording a 2:05.83. The sophomore placed fourth in the 100 back and was also a member of the Broncos 400-yard freestyle relay B team that placed second with a 3:33.02, as she accounted for 21 team points.

Five other Broncos recorded individual victories on Saturday. Madesyn Ronquillio claimed the 100 back with a 56.38. Robin Pinger took first in the 100-yard breaststroke swimming a season-best 1:04.54, Delaney Phillips (2:23.83) won the 200 breast and Beatriz Zoppei (56.15) took the 100-yard butterfly.

“It was a very exciting meet for us,” assistant coach Larry Liebowitz said. “They really stepped up and swam fast with a lot of people having best times of the year.”

On the board, Jenny Cheetham, Emily Luberto, and Emily Sharrer all dove on the 3-meter today for the Lumberjacks, sweeping first, second and third. Cheetham earned another qualifying score of 290.85, whereas Luberto (272.85) and Sharrer (268.28) fell just slightly short. Although she might not have qualified today, Luberto recorded a new best 3-meter finals score. The scores from today’s dive will count towards the ‘Jacks combined score tomorrow.

“It’s awesome that we went first, second, and third,” head diving coach Nikki Huffman said. “Jenny was really consistent today, so that was great for her. Emily Luberto earned her personal best today, just missing qualifying scores, and was really the shining star.”

Although the ‘Jacks swam in some familiar events, many were events competed not only for the first time this season, but also in the Aquatic and Tennis Complex, breaking new personal records and pool records, like Liebowitz said.

In the 100 IM, Niamh McDonagh, Haley Mayhew, and Katy Smith switched the lead over to the ‘Jacks after sweeping first, second, and third, respectively. McDonagh now holds the fastest time and new pool record time of 58.11 in the 100 IM for Northern Arizona.

Hope Williams now holds the fastest time after taking first place in the 50 breaststroke, after completing her race in 28.95. Clara Foster ended in fourth, 30.70.

Swimming in the 50 fly, Maddie Seidl now holds the top time of 25.44 with Lauren Hazel behind her with a time of 26.20. Seidl placed second in the race against Boise while Hazel took fifth.

Not only that, but three swimmers automatically qualified for the CSCAA National Invitational Championship for their times tonight: McDonagh, Williams, and Seidl. The NIC takes place March 12-14 in Cleveland, Ohio.

Northern Arizona will run a 16 event meet tomorrow against Boise State beginning at 10:30 a.m. in the Aquatic and Tennis Complex. The meet will include the 200 medley relay, 200 IM, and 400 free relay. Diving will be taking on the 1-meter boards and running exhibition dives on the platform.

Beginning at the second break (approx. 11:50 a.m.), Northern Arizona will honor its four seniors graduating this May, Erin Spielman, Kate Bier, Fernanda Montiel and Alice Hick for their accomplishments as Lumberjacks.

“We started out really great,” head coach Andy Johns said. “Diving helped to put us ahead, but we just couldn’t finish the second half of the meet. There are a lot of positives we saw from the last two days, like the toughness and resilience of the girls not giving up. I think we are in a great place to really home in on our skills before the WAC Championships next month.”

The Lumberjacks started out strong in the first event, the 200 medley relay, where Lainie Bell, Hope Williams, Elisa Rodriguez and Miranda Nichols took the top time of 1:44.59, helping the team get up 11-6 before the 1000 freestyle.

Boise swept first, second, and third in the 200 free, with Alice Hick and Miranda Nichols behind them. Hick swam a 1:57.14 race while Nichols took a 1:58.01 to finish fifth. Both of these swimmers are now in the top ten in the 200 freestyle for the season, and although Hick and Nichols took fourth and fifth, NAU kept their lead, 28-27.

The lead switched over to BSU in the 100 backstroke, where they placed first, second and fourth. Lainie Bell took third place, finishing her event at 57.83, with Fernanda Montiel in fifth at 59.78. The Broncos kept their lead through the 100 breaststroke and 200 fly, pushing their scores to 50-62.

Rodriguez bumped her team score up once again in the 50 freestyle where she placed first, hitting the pad at 23.55. Sarah O’Connor finished in fourth for NAU, timing in at 24.75.

Boise State continued to keep the pressure on the team, winning first and second in the 200 backstroke, 200 breaststroke, 500 freestyle, 100 butterfly, and the 200 IM.

In the 400 freestyle relay, NAU’s Rodriguez, Katy Smith, O’Connor and Nichols broke the Broncos winning streak, finishing first in 3:31.17 to end the meet on a high note.

Today, the ‘Jacks also celebrated their four seniors who are graduating this May: Kate Bier, Montiel, Erin Spielman and Alice Hick during their last dual meet of the season.

“We’re happy to see our seniors performing well this weekend and being excited about this next month of training,” Andy Johns said.

The divers will be back at home next weekend for the second Lumberjack Diving Invite this season. The meet will begin on Friday, Jan. 31 with the 3-meter at 10:30 a.m. Saturday, Feb. 1 will include both the 1-meter dives at 10:30 a.m. and the platform at 2 p.m.