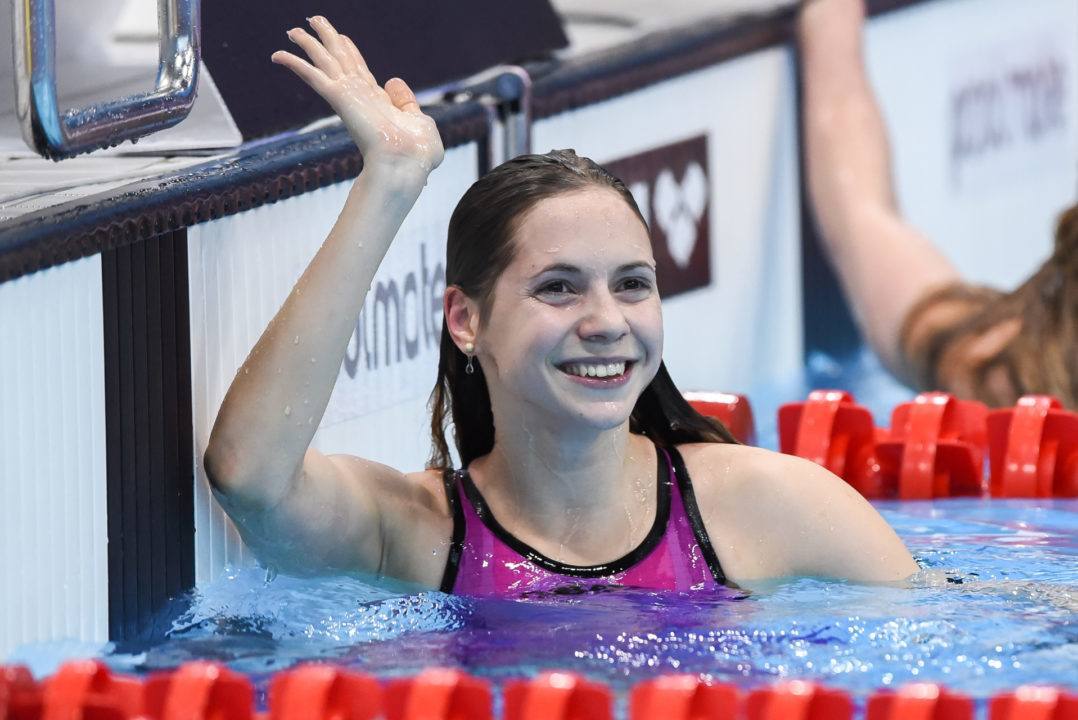 Over the past week, two of Hungary's best athletes have been after the same national record. Current photo via Peter Sukenik/www.petersukenik.com

Over the past week, two of Hungary’s best athletes have been after the same national record.

Heading into the European Championships, do-everything star Katinka Hosszu held the national 400 free record at 4:05.51, a time she set in 2014.

But young distance freestyler Boglarka Kapas came up big at Euros, smashing Hosszu’s record with a 4:03.47 that keyed on a huge back half from the 23-year-old.

Always a competitor, Hosszu didn’t let the record fall without a fight. About a week later, the 27-year-old competed in a full event lineup at the Bergen Swim Festival, and used her prelims swim in the 400 free to attempt a reclamation of the record.

Hosszu rolled to a prelims swim of 4:04.96 – a half second better than her previous record, but still a second shy of Kapas’s mark. Hosszu, as is her usual fashion, competed in a plethora of events that day, and merely cruised to a finals win in 4:15.26 while swimming one of a whopping 11 races that night.

The best news for Hungary as a country in all of this is that the red-hot swimming nation now boasts two legitimate medal contenders in the 400 free.

Hungary could enter both at Rio, and have two tickets in the lottery that is the battle for silver and bronze, with world record-holder Katie Ledecky widely favored to run away with gold.

Or perhaps in a better scenario, Hungary can count on Kapas to put up a strong medal fight, freeing up Hosszu to focus on a more limited event lineup in search of her first-ever Olympic medal.

Hosszu shouldn’t bother with the 4Free in Rio and I don’t think she will. Hopefully she sticks to the 4IM, the 2IM, 1Back, and the 2Back. Olympic medals have eluded her thus far and I think these would be her 4 best shots, including a likely 2 golds (and hopefully WRs) in the IMs. I hope she doesn’t make the mistake of chasing additional medals in the 2Free or 2Fly as that would be a good way to exhaust her and either one would conflict with the 2IM which is her bread and butter.