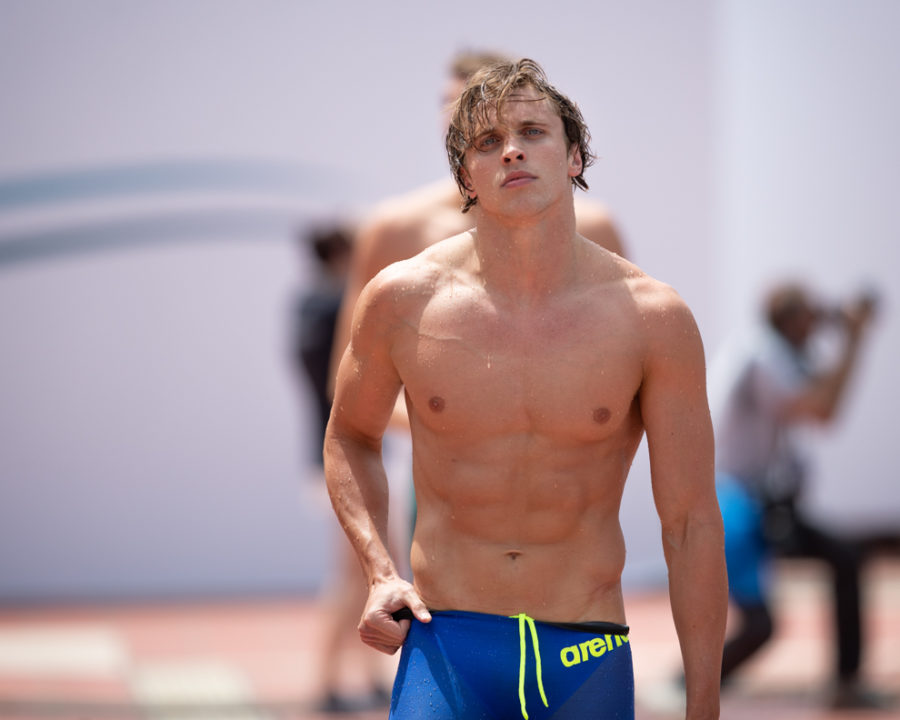 Get your fix on smaller swimming stories from around the web in this week's edition of Beyond the Lane Lines, featuring Italian pro Santo Condorelli. Archive photo via “Rafael/Domeyko Photography”

“As the world celebrates the beauty of competition at the Olympic Games Tokyo 2020, global prestige skincare brand SK-II teams up with top Olympic athletes to declare #NOCOMPETITION, in a stand to take the competition out of beauty. Through sparking conversations, SK-II hopes to inspire women to define what beauty means to them and not take part in these toxic competitions. Because pressure should never dictate our choices,” reads the campaign, which features Liu and the other athletes defying how female athletes ‘should look, feel and act’ to eliminate pressure holding them back in daily lives.

YoeGin Chang, Brand Director, SK-II Japan says, “Beauty can be many things. But one thing it should never be, is a competition. As the world directs its attention towards and celebrates the greatest competition for humanity, the Olympic Games Tokyo 2020, we want to take this opportunity and call out the toxic competition in beauty that women face every day that dictates how they look, feel and act. SK-II is, at our core, a human brand. We want to use our voice as a force for good to create positive change in the world today. We would like everyone to join us by lending your voice to #NOCOMPETITION.”

Liu was the 2015 World Championship bronze medalist in the women’s 50m backstroke.

As reported by Around the Rings, the Faroe Islands capital Tórshavn has announced that its new 50-meter, 10 lane swimming pool will complete construction in 2022. This marks the 2nd such facility on the Faroe Island, joining the existing site in Vágur named after Faroese 2012 FINA World Swimming bronze medallist Pál Joensen.

The new pool is being funded by an €18 million investment by the municipality of Tórshavn.

Jon Hestoy, Vice President of the Faroese Confederation of Sports and Olympic Committee [FCSOC] says of the project, “This new state of art 50-meter pool, which will complement the Faroe Islands existing 50-meter facility in Vágur, is a key part of a wider Euro 100 million-plus nationwide investment in sports facilities and really shows the scale of our ambition. This great new pool is fully FINA complaint and will provide our aspiring elite swimmers with a top-class venue to help them train and develop, and we are confident that a number of them will go on to proudly represent the Faroe Islands in FINA international events. We say this because of our proven track record in elite swimming, with athletes such as Pál Joensen, and because FINA is one of 11 IFs that already recognize the Faroe Islands.”

#3 Santo Condorelli Back at USC

American-turned-Canadian-turned Italian swimmer Santo Condorelli is spending some time in the sun at his alma mater, the University of Southern California. Joining Russian Olympian Vlad Morozov at Uytengsu Aquatics Center, Condorelli is getting some training in away from his current home of Alabama.

Per USC and Trojan Swim Club coach Dave Salo, Condorelli will be spending a week or so in California as the University of Alabama squad is racing in Auburn at the 2020 SEC Championships.

Condorelli is set to race at the Italian Spring Championships next month, the primary meet at which the nation’s Olympic team will be selected.

Current United States President Donald Trump recently visited Los Angeles to be briefed on the 2028 Olympic Games progress. The Games are largely a privately-funded affair, with a proposed $6.9 billion (£5.3 billion/€6.2 billion) balanced budget, with revenues coming from sponsorship, television deals, and ticket sales. (Inside the Games)

However, the U.S. government is also expected to contribute several million dollars towards the security costs, as the competition has been designated as a ‘National Special Security Event.’

Trump’s visit to meet Los Angeles 2028 officials is part of a three-day, four-state trip to America’s Western states as he begins his campaign for re-election in November.

Part of the Global Swim Series, a collection of over 150 races spanning 34 countries, the 96th Nelson Mandela Bay River Mile is set for this weekend. Taking place in Cannonville, South Africa, the oldest swimming event on the continent will see kids and adults race up to an entire mile in the river.

87-year-old Mally Richards will be competing in his 67th River Mile, owning the world record for participation longevity in open water swimming from the Swimming Hall of Fame. (R News)

Forget about the article and focus on Santo’s pec veins popping out… boy got the pump!!!

When did beauty become a competition? About many many millennia before humans startet to exit? Isn’t it ridiculous that a skin care company laments exactly that, like, they are part of what they try to „fight“ there? Very weird.
Anyways, santo flexing his abs so much he’s a bit hunched over is pretty funny. he’d look good regardless, that silly boy 😉

didn’t know Condorelli was training at Alabama. Also, he looks like he’s in shape. Hope he can drop a 47 again.