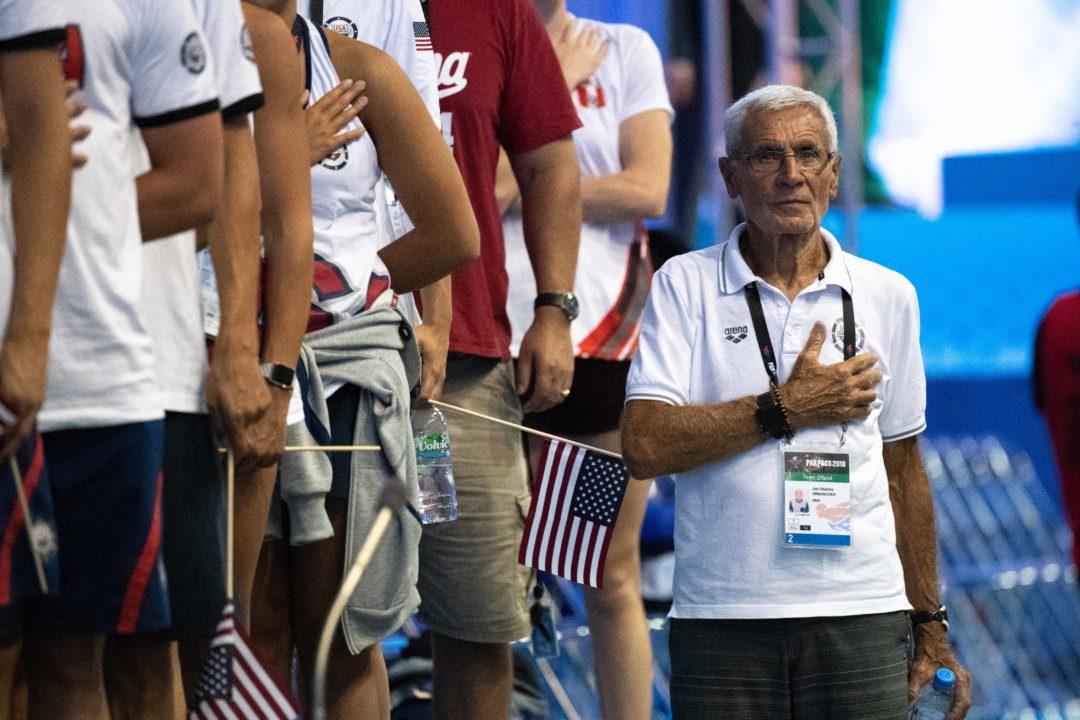 Check out who has entered what hall of fame and earned which award during this special edition of our Beyond the Lane Lines series. Archive photo via Mike Lewis/Ola Vista Photography

Our workout today comes from Mount Kelly Swim, and is meant to be a simulation of a swim workout with a warm up, activation, and main set

Welcome to a special edition of Beyond the Lane Lines, with this week’s installment presenting verious Hall of Fame inductees and award winners from around the world. Reflect on some tremendous careers and seasons of both coaches and swimmers as the year 2019 comes to a close.

California’s Anaheim Union High School District has unveiled its new aquatics center, with the namesake honoring one of the most successful international coaches in the game.

The Jon Urbanchek Anaheim High School Aquatics Center was introduced this week, with the facility honoring the famed University of Michigan and U.S. Olympic coach whose roots originate in Anaheim.

“This (was) my first job,” said native Hungarian Urbanchek. “If I didn’t have this job, I would never be a coach at Michigan. I won’t be a coach at the Olympics. … I learned everything by coaching here.

“My first two jobs lasted a year. One in Dayton, Ohio. One in Garden Grove. … Honestly, I loved my job here as a high school teacher and coach. That was the best job I ever had.”

Urbancheck was at Anaheim High from 1965-1978, establishing the foundation for his storied coaching career that landed him in the International Swimming Hall of Fame. He coached boys water polo and swimming at Anaheim, leading the Colonists to numerous league titles and a CIF-SS runner-up finish in boys swimming in 1970. He also taught health classes at the school.

Greetings from the dedication of the new pool at Anaheim high! It looks amazing! 💦💯@ocvarsity @jonurb pic.twitter.com/ofadqnAXU7

Kiwi teenager Erika Fairweather topped off her breakout year with yet another accolade. This week, the 200m freestyle gold medalist from the 2019 World Junior Championships home the Junior Māori Sportswoman Award at the 2019 Māori Awards Ceremony.

Cameron Leslie was also honored with the Māori  Sportsperson with a Disability Award.

Arriving in New Zealand more than 1,000 years ago from their Polynesian homeland of Hawaiki, Māori are the tangata whenua, the indigenous people, of New Zealand.  They make up 14% of the kiwi population and New Zealand’s Department of Tourism relays how the Māori ‘history, language, and traditions are central to New Zealand’s identity.’

The Māori awards are meant to foster, promote and encourage sportspeople in the pursuit of excellence in their chosen sporting activities.

You can see all of the award winners here.

Presented by Dr. David Moorcroft, OBE, Titley and other inductees joined the 59 existing Hall of Fame members, with 2 new categories of Performance Sport and Sports Leader being introduced this year.

At the 2016 Olympic Games, Titley put 5 athletes onto the Canadian Olympic squad in the form of Chantal Van Landeghem, Michelle Williams, Sandrine Mainville and Penny Oleksiak, the latter of whom tied American Simone Manuel for gold in the women’s 100m free.

Prior to his move to Canada, he helped guide James Gibson of Great Britain to a 50m breaststroke world title and subsequent Olympic final in the 100m breast. In addition to coaching world record holder and world champion Liam Tancock, Titley also served as the British women’s head coach for the 2008 Olympic Games, where Joanne Jackson took 400m free bronze.

You can read about the other inductees into Loughborough University’s Hall of Fame here.

Irish national record holder Darragh Greene has been honored with the Ganlys Longford Sports Star of the Year award for his breakout breaststroking swimming during 2019.

The 24-year-old became the first Irishman to go inside the Tokyo 2020 Olympic qualification time, nabbing a consideration spot on the roster in the 100m breaststroke. His time of 59.82 cleared the FINA A cut of 59.93, earned during the heats of this year’s World Championships.

Brittany Elmslie, Aussie Olympic swimmer who retired earlier this year at just 24 years of age, has been inducted into the Sunshine Coast Sports Hall of Fame.

Honored at a special ceremony at the University of Sunshine Coast in late November, Elmslie was honored for here prolific swimming career, which spanned over a decade.

Elmslie represented Australia at the junior international level as a teen before making her first international team in 2012 as an 18-year-old. She earned gold at the 2012 Olympic Games in London as a member of the women’s 4x100m free relay team and also reaped 2 silver medals as a prelims swimmer in the 4x200m free and 4x100m medley relays there.

She continued to add to her career medal haul with 2 more Olympic medals, including 4x100m free relay gold, at the 2016 Olympic Games in Rio.

Anaheim changed a lot its more inner city and has poorer kids than when Jon Urbancheck was there. Its nice that they honored him after all these years.