Beyond The Lane Lines: Strongman Swimming 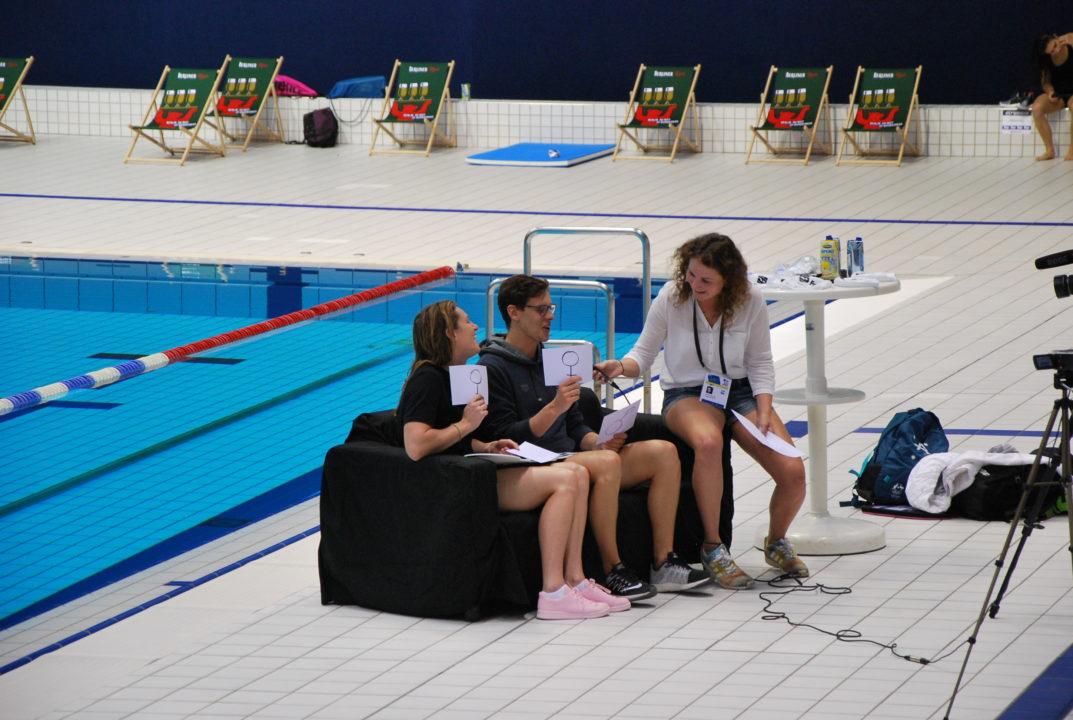 A naked swimmer readies for TV while the possible 'strongman swimming' era kicks off. Archive photo via StockImages

Get your weekly news fix on happenings outside the pool with our second edition of ‘Beyond the Lane Lines.’ If you missed our first edition, we’re collecting personal stories, little known facts and general items of interest from athletes around the world in their non-aquatic habitats, helping us get to know them for more than just an event ranking or time on a board. Read on and learn something new this week.

It’s not uncommon for famous athletes to appear on reality tv shows a lá Michael Phelps on LipSync Battle or Ryan Lochte on Dancing with the Stars. However, multiple Olympic medalist for the Netherlands, retired Inge de Bruijn is taking things to an entirely new level. Set to appear on the Dutch realty TV show ‘Adam Seeks Eve’ this week, 43-year-old de Bruijn will not only be seeking love on a tropical island, she’ll be doing so completely naked. The former freestyle sprinter and two suitors will go about pursuing love on a secluded island (as secluded as one can be broadcast on national television), all the while sans clothing. At the finale, the contestants get back into their clothes and decide whether they want to continue their relationship ‘out of Eden.’ The show has been running for 6 seasons in her native Netherlands.

2008 Olympic gold medalist Rebecca Adlington helped former British Olympic teammate Tom Haffield open his new coffee shop in Wales this past weekend. The new shop aptly named ‘Training Group’ has opened next to Penarth train station, with Adlington supporting her close friend Haffield at its public opening. “I’m so proud of what Tom has achieved – in the pool and since retiring from sport,” says Adlington. Plus, I absolutely love a really good coffee.”

Australian Olympians Emily Seebohm and Mitch Larkin were among several recognizable faces walking about Queensland with their four-legged animal friends over the weekend in support of the Royal Society for the Prevention of Cruelty to Animals Queensland (RSPCA). As ‘furbassadors’, the swim stars joined thousands of other animal lovers, including fellow Dolphin Jake Packard, in a collective ‘Million Paws Walk’ benefiting animals in need. The community-based RSPCA organization helps to re-home animals and is the only non-government agency with the power to prosecute animal cruelty and neglect.

#4 – Is ‘Strongman Swimming’ Becoming a Thing?

As if the 400 IM and 200 fly weren’t grueling enough, endurance athlete Ross Edgely is developing his own concept of ‘strongman swimming’, which in his case, involves open water swimming with a tree tied to his back. Yes, you read that correctly. After a reportedly beer-fueled conversation with friends and retired elite swimming couple Kari-Anne Payne and David Carry, Edgley was inspired to develop a 4-part ‘ultra-marathon’, which is slated to include a 10k lake swim, 20k Thames River swim, a 30k swim around Lock Lomond and, finally, a 40k ocean journey from Martinique to St. Lucia. He plans on dragging a 100-lb tree on his back all the while. As for the ‘why’, Edgley succinctly explains, ‘I want to challenge what sports science believes the human body is capable of,’ he says.

‘It’s an odd way to spend the rest of the year I know, but last year I ran a marathon pulling a 1.4 tonne car, climbed a rope the height of Everest (8,848m) and completed an Olympic-distance triathlon carrying a 100lbs tree – all to raise money for charity. But it was only after my last event, over a load of beers, that it was decided the “Tree-athlete” should live on.’