Best Friends Urquidi and Fertel Verbally Commit to Florida Together 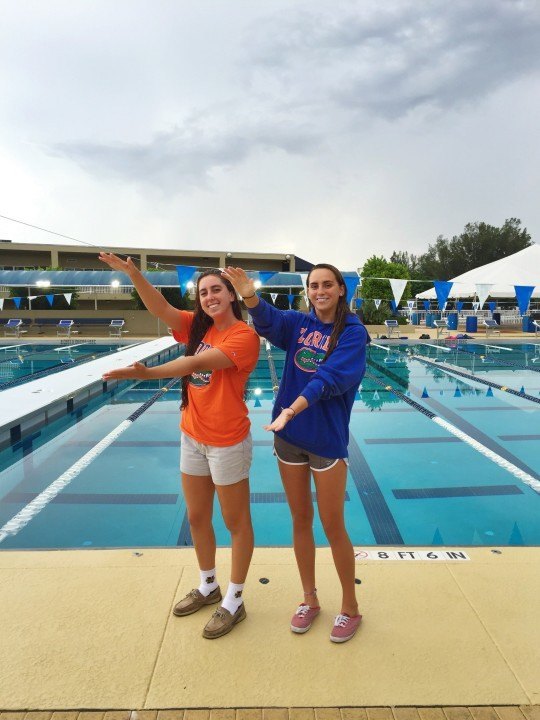 Kelly Fertel and Niki Urquidi, best friends, 2016 Olympic Trials qualifiers, Gulliver Prep 2016 classmates, and Gulliver Swim Club teammates, have signed up for another four years together: both verbally committed to the University of Florida women’s swimming and diving team yesterday. They will join fellow early commit Savanna Faulconer in the class of 2020.

“I guess the most important thing I can say is thank you to my amazing coach, Jeff, and my incredible teammates. I can’t believe that my high school swimming is almost over but I’m so excited to continue my career at UF!
“And I’m even more excited to be able to spend the next four years with one of my best friends and closest teammates, Kelly. We’re ready to bring a little bit of South Florida up to Gainesville.
“Oh and most importantly, GO GATORS!”

Her top times include:

While Urquidi’s times would have been just outside scoring range for the 2015 SEC Championships, she made strides in the 200 and 400/500 freestyle events this past season, dropping time both in short course yards (1 second and 7 seconds, respectively) and in long course meters (1 and 2, respectively).

“When it came down to making my final decision I just knew that Florida was a place I could call home for the next four years. I’m so excited to be a baby gator with my teammate and best friend, Niki Urquidi and see how far I can take my swimming at such an amazing program. I wouldn’t have been able to make this great decision without the wonderful support of my coach, parents, friends, and teammates.
“This summer was an incredible experience for me even aside from the fact that I made my trials cut, I got to race against some of the fastest girls in the country. I’m excited to start a new chapter of my life at UF!
“GO GATORS!!!”

Fertel won the 200 IM at the 2014 FHSAA Class 2A Championships and was runner-up in the 100 breast. She swam breast on the medley relay and anchored the state-champion Gulliver Prep 400 free relay that Urquidi led off.

Fertel should make an immediate impact for the Gators in dual meets and at SEC Championships, where already her 200 breast and 400 IM times would have scored in 2015.

Hi kelly my name is jota and I’m one of you’re biggest fans!!! I hope I grow up to be at least somewhat relatively like you or even better!!! Lol jajajaja. Niki I wish I can spell you’re last name but I can’t but you’re better than kelly!!! Lol I also want to be like you!!! Lol jajajaja!!!! I hope you guys think I’m funny and maybe someday we’ll be good friends!!!!