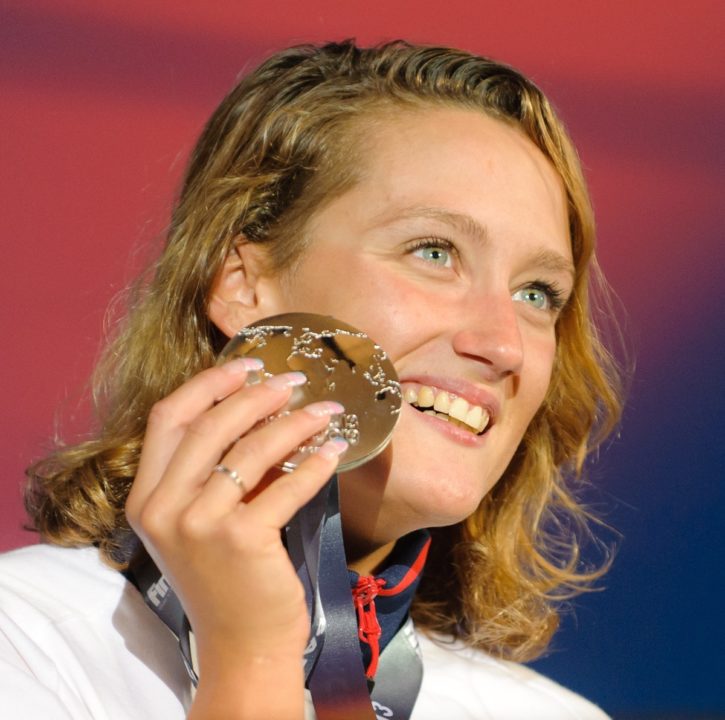 Mireia Belmonte has had a fantastic year in the pool. In Barcelona at the FINA World Championships she collected silver... Current photo via Victor Puig

Mireia Belmonte has had a fantastic year in the pool. In Barcelona at the FINA World Championships she collected silver in both the 200 butterfly and 400 IM as well as a bronze in the 200 IM, much to the delight to the home town crowd. She then went on to set new world records in the 400 (3:54.52) and 800 (7:59.34) freestyle SCM at the World Cup stop in Berlin in August.

Because of those accomplishments and the character that the she has portrayed Belmonte has been awarded with the 2013 Blanquerna Sports Award. The Blanquerna Sports Award has been created by Ramon Llull University and is to be given to to individuals and/or organizations that have had outstanding performances in sport and have contributed to transmitting proper values in sport and society.

Other athletes who have received this award include NBA All-Star Pau Gasol and golfer Paula Martin.

In a speech by Dr. James Bantul he highlighted three main reasons why the award was given to Belmonte, the following is a rough translation.

“Because you are a leader and role model in the practice of evidence the effort, sacrifice and self-discipline, because as a woman, you have the added merit of bringing the access of women to sport in general and in particular high-level sport and because every day shows that it is possible to make a landmark challenge manageable, and because young athletes have a reference mirror in which, for your talent and your internationally. ”

Belmonte is currently second in the World Cup points rankings and will be looking to add to that point total tomorrow in Singapore.