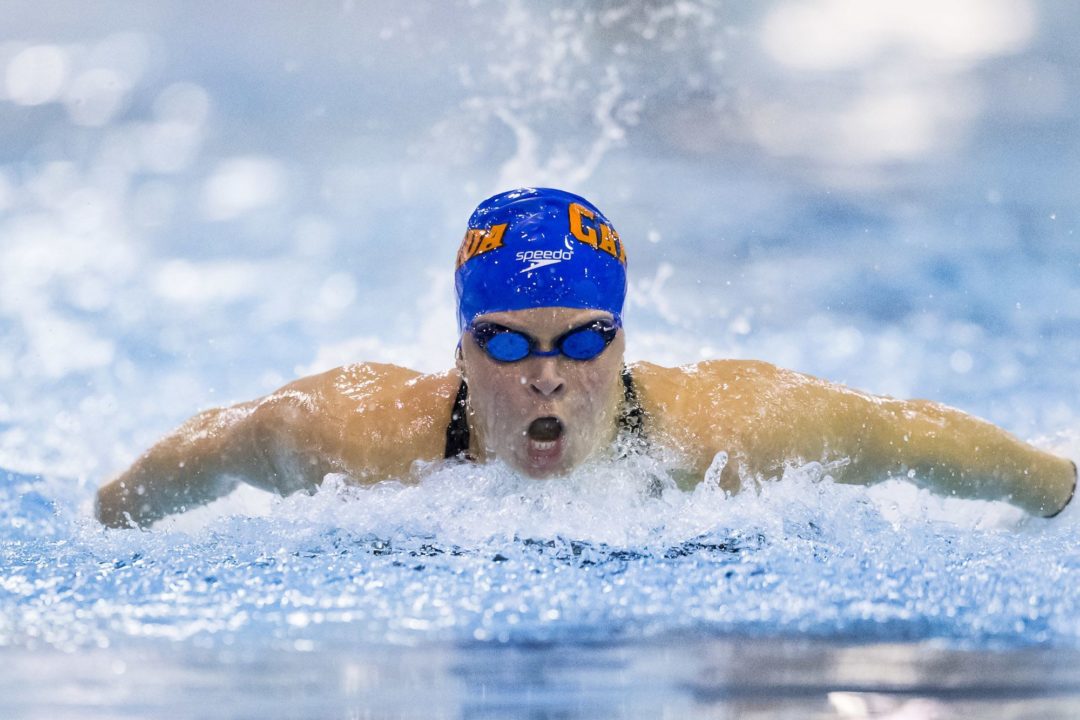 Florida's Elizabeth Beisel will swim no first day event at this year's NCAA Championship meet, and instead pull a tough 200 back/200 fly double. Archive photo via Tim Binning/TheSwimPictures.com

In a huge curve ball, Florida All-American Elizabeth Beisel has entered the 400 IM, the 200 back, and the 200 fly for the 2014 NCAA Championships, forgoing a day one event in favor of two on the meet’s final day.

While these lists don’t show the cut-off lines for the NCAA Championships, they do show which three events different swimmers have selected as their three attempted entries for NCAA’s; for swimmers like Beisel, this makes for their three actual entries with invites secure by Automatic Qualifying times.

Beisel has toyed with quite a few different events this season, and ranks 9th in the 200 fly (1:54.60) despite not racing it at the SEC Championships. Unlike prior years, she probably won’t have any final day relay commitments though, so swimming these two races, which fall as event 16 and 19 and so have a little separation, shouldn’t be unimaginably grueling for her.

Beisel’s first day in previous years has been a bit shaky; as a freshman, she was 8th in the 500 free, as a sophomore she DQ’ed the 200 IM, and last season she was 5th in the 200 IM. The Gators are banking on her being able to outplace that in the 200 fly even at the end of a Saturday double-swim session.

There were no big surprises that we noticed from the defending NCAA Champions at Georgia.

Much more analysis to come, including drawing the expected cut lines on Wednesday.

Teresa Crippen did this schedule every year with much success. I wonder if they’re resting her on day one to give her the best shot at the NCAA record in the 400 IM.

Perhaps not super significant at this point in time, but Celina Li is listed in 200 Br and not 200 Fly…interesting…

I assume based on her breaststroke relay split, she and Teri thought that was the better option…and more potential to move up. I think she would have been ranked 48th in both events, pending if she qualifies to swim 200 BR.

Looks like the 100 back bubble benefited the most this year due to scratches. Nine of the top 50 scratched, moving quite a few people into the meet in this event. The 200 IM and 200 Free each had 6 scratches from the top 50. The 200 breast provided the least bit of help with only one scratch.

that makes sense though… anyone who is good at butterfly is probably also good at backstroke and freestyle and for that matter IM… but 200 breast is probably the most specialty event… in that there is the least correlation between being good at breaststroke and being good at the other strokes. The best IMers are almost always flyers or backstrokers.. (thinking phelps/lochte)

Anecdotally, like in the extreme cases of Phelps and Lochte, yes. Traditionally, no. Breaststrokers have the innate advantage of being fastest at the leg that takes the longest. So, if Breastroke takes 10% longer than backstroke, and a swimmer is 10% faster than competition, whereas their competition has the same advantage in backstroke, all else being equal, the breastroker will have a slight advantage = 1% of the total time of the faster backstroke leg. Capiche? Same reason back half swimmers are often the best – they are moving the fastest, relative to their competitors, during the phase of the race that takes the longest.

The “See the lists here” link gives me a pop-up window of a random photo of 3 people.

Thanks guys. The two were side-by-side in our media library, must’ve selected the wrong one.