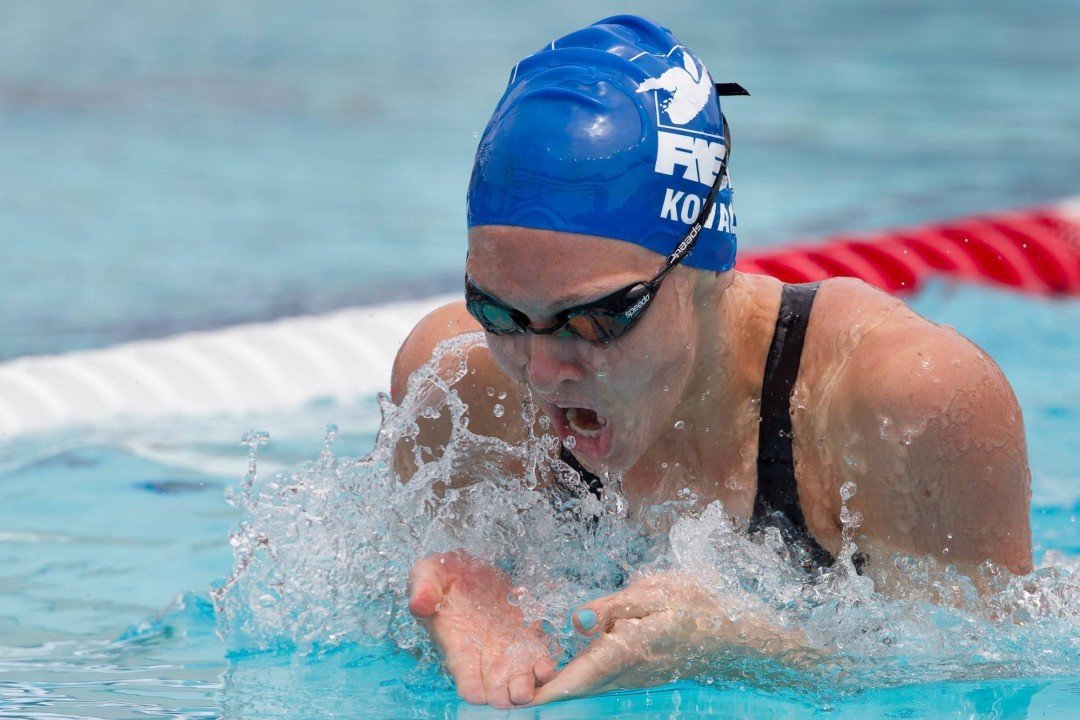 A 100 breaststroke state title from sophomore Bailey Kovac nailed down the win at the end for the Fossil Ridge Sabercats. Archive photo via Tim Binning/TheSwimPictures.com

On paper, the Colorado 5A girls’ state championship meet was expected to be a tight battle between Fossil Ridge and Regis Jesuit. In practice, however, Auburn commit Bailey Nero and her sophomore teammate Bailey Kovac combined to lead the Fort-Collins-based Fossil Ridge Sabercats to a dominant team victory that included winning two-of-three relays along with three-of-nine individual events.

Fossil Ridge set the tone early in this meet, winning the 200 medley relay with a 1:43.04 – more than two seconds better than runners-up ThunderRidge High School, while Regis Jesuit took only 4th.

With three homophonic swimmers on that relay, it was the middle-two stars – Kovac and Nero – who made the difference for this team.

In a meet that, for the first time in a few years, had a big senior presence, Notre Dame commit Ella Moynihan from Arapahoe High School took the day’s first individual event, the 200 free, in a 1:48.29. That’s a new lifetime best for her, and throughout this meet, the middle-distance specialist showed more of her speed than her endurance.

While she would take a double, also winning the 500 free in 4:54.92, that swim was four seconds from her best time, as compared to the 200 and her relay sprints that compared much more favorably against her historical charts.

Fairview’s Brittany Beecher, just a sophomore, took 2nd in both the 200 and the 500, and should pick up that torch from Moynihan next season.

While Fossil Ridge didn’t win that 200 free, they were the only team with two swimmers in the A-Final (Quinn Fawcett was 5th in 1:52.80 and Riley Hoffman was 6th in 1:53.15), and with a third swimmer in the B-Final, they scored a monstrous 31 points in that race. Regis Jesuit didn’t have a single finalist in that 200 free, meaning that they would be left to play catchup for the rest of the meet if they were to defend their team title.

Fossil Ridge would send another demoralizing wave through in the women’s 200 IM, with three swimmers in the A-Final, and another one in the B-Final for another whopping 54 points. This time, that included a victory from Nero in 1:59.20 as she beat out Texas commit Brooke Hanson, who was a 2:01.58 for 2nd place.

Kovac took 3rd in 2:03.11, and while Fossil Ridge did put their two best swimmers in the same event, the early scoring advantage seemed to be worth it. Bailey Kovac’s younger sister, freshman Cameron, was 11th in 2:10.46 in this race.

By this point of the meet, Fossil Ridge had already scored 125 points, and while things were a little quieter for them in the 50 free (freshman Zoe Bartel was their only scorer, taking 4th in 23.73), Regis Jesuit wasn’t able to do much damage in the sprint event to catch up.

The win went to Arizona commit Ochitwa from ThunderRidge in 22.86 after she cleared 23 seconds in both prelims (22.79) and finals.

Regis Jesuit took advantage of their biggest edge over Fossil Ridge in the girls’ 1-meter diving event, as junior McKenzie Austin repeated as the State Champion, and broke the 5A Record, with a score of 540.30. The powerful diving program had three scorers, to just one from Fossil Ridge, to make back 27 points, but that momentum was halted in the next race.

Regis Jesuit was able to make up some points for the third-straight event (16 this time), but the gains just weren’t coming in big enough pieces.

Annie Ochitwa, the one swimmer who might’ve challenged Nero in that 100 fly, instead saved her muster for the 100 free where she had a battle with another of the state’s top seniors: Brooke Hansen.

Both swimmers were pushed to new lifetime bests, but it was Ochitwa who got the edge in 49.60 with Hansen taking 2nd in 49.97.

Fossil Ridge and Regis Jesuit were both represented in that A-Final, and while Regis Jesuit had three swimmers in the top 8, they weren’t able to hold their prelims ranks. That meant a 6-7-8 position and another missed opportunity to do damage in the team scoring.

Fossil Ridge stemmed the tide with a second-place finish in 1:36.25, and most importantly was able to do so without using either of their stars (Nero or Kovac). ThunderRidge placed 3rd including a 22.56 anchor from double sprint champion Ochitwa.

An early DQ in the 200 medley relay kept Rock Canyon out of the overall top 10, but junior Abigail Kochevar emerged as one of the stars in this meet anyway. After placing 2nd in the 50 free, she won the girls’ 100 back in 54.17. That’s an eight-tenths of a second improvement on her old lifetime best which was done at the same meet last season. ThunderRidge’s Patricia Van Law was 2nd in 55.58 and Mountain Range’s Shelly Drozda was 3rd in 55.80.

There wasn’t much movement from the two teams battling for scoring supremacy here, with the top finisher among them being the freshman Stewart in 56.87.

While the score had narrowed by this point of the meet after Regis Jesuit clawed their way back into it in the middle portion, during finals, Fossil Ridge knew that all they needed was to be close going into the 100 breast and the title was as-good-as-theirs. That’s because they had two swimmers in the A-Final and one in the B-Final, while Regis had only a single B-final entrant of their own.

The Sabercats handled their business with another state title, this one from Kovac in 1:03.03, as well as another two-out-of-three finish as Jayden Glover placed 3rd in 1:06.68. A single-event, 43.5-point advantage was all they needed to put this meet out of reach.

Taking 2nd in that 100 breaststroke was Ralston Valley’s Mackenzie Atencio in 1:05.73.

With the pressure of the team title off, and the stars still with an event left to swim, Regis Jesuit and Fossil Ridge put on a spectacular show for the fans in the closing 400 free relay.

The race stayed dead-even after FR’s Kovac split 51.52 on the third leg and RJ’s Samantha Smith was a 51.36, meaning the battle would come down to the teams’ star seniors Bailey Nero and Taylor Wilson.

Very proud of all the girls who competed at the state meet from the Fort Collins Area Swim Team. Congrats to Fossil for bringing another title back to Fort Collins.

Amazing coverage of what is rather small slice of the swimming world pie, albeit on that produces many very high caliber swimmers each year. Thanks!