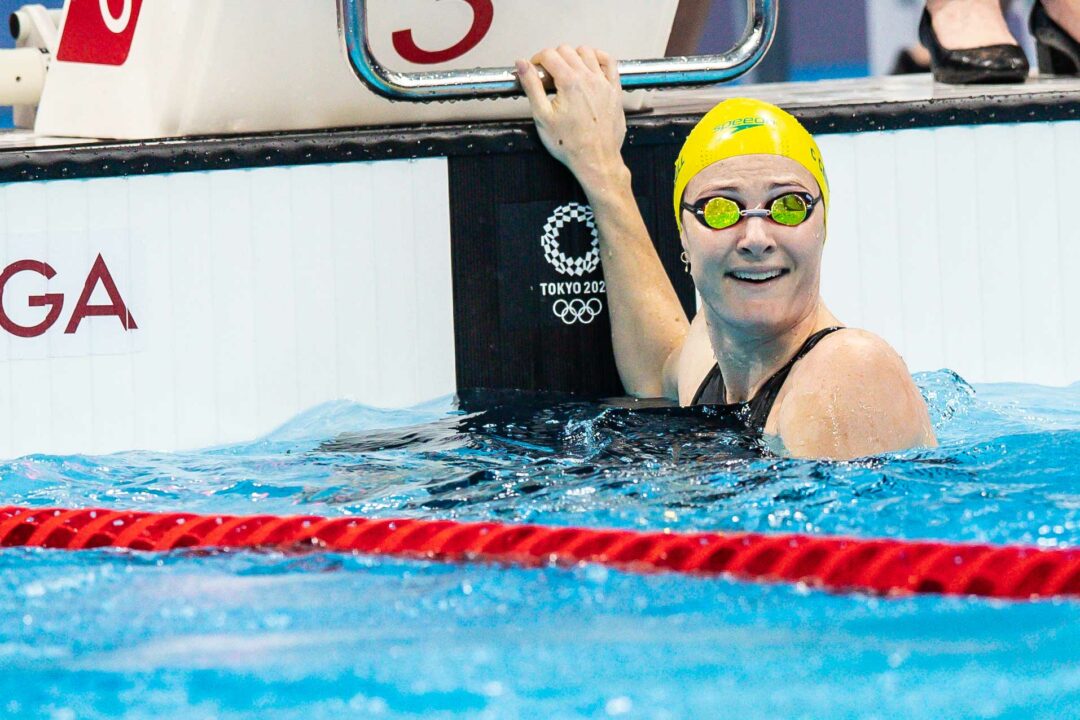 The nation of Australia produced its best-ever Olympic team performances in the pool at this year’s Games in Tokyo, Japan. The squad scored 9 gold medals which surpassed its count from its previous most successful Games of Melbourne in 1956.

Among the multi-medalists were Emma McKeon and Cate Campbell whose gold and bronze medal-worthy performances in the women’s 100m free represented the first time Australia had had two medallists in the women’s event since the aforementioned Melbourne Games.

For Campbell, the result in Tokyo marked 13 years between individual bronze medals, with her prior third-place finish having come in the 50m free at the 2008 Olympic Games in Beijing when she was just 16 years of age.

As such, these Tokyo Olympics represented the Simon Cusack-trained athlete’s 4th Games appearance and Campbell is not counting Paris 2024 out.

“To be honest, I haven’t made any plans,” now-29-year-old Campbell told media this week while in 2-week quarantine upon returning to Australia from Japan.

“I’m just going to sit back and enjoy this moment for what it is.”

“There’s no point in saying this is definitely the time to walk away, but I definitely need a little bit of a different stimulus for a while.”

C1 also took a break after the 2016 Olympic Games in Rio, where she didn’t compete for most of 2017, including opting out of that year’s World Championships.

Has anyone ever been their country’s flag bearer in the opening ceremonies twice? That would be pretty cool.

Gotta think Ledecky gets that honor in Paris if she is on the team. With Allyson Felix retiring, that likely leaves someone from basketball or women’s soccer as the only other likely options, right?

Ledecky- depending on swimming schedule….closing is usually a better bet for swimmers.

Can’t see her getting the individual again with Molly O coming along and Emma being younger.

But she could still be a valuable relay contributor for sure.

One suspects that McKeon is likely to go on to Paris and that should lock up one of the 2 individual berths. Would agree that it will be a battle for C1 to hold onto the other spot unless both Harris and O’Callaghan stall in their progress. At this point, she may still have a route via the 2nd 50free spot.

Until/unless someone else comes forward as a reliable sub53 split, the 4th spot is hers if she wants it.

Don’t forget Shayna Jack .. she was swimming 53.2 before the drug issue came up .. she might contend for Paris 2024 relay teams at least

Possibly but whether she can handle having that shadow always being held over her is open to question. Not too many have done so …. and I cannot find any AUS precedents for doing so. Most have chosen to retire and the only high level AUS case I can recall was Riley back in the mid 90s. She was let off for a headache tablet with her coach taking the dive ……. but she was never mentally the same afterwards.

I don’t even think the analgesic Riley tested positive for is banned anymore.

Maybe the case but mentally she was a deer in the headlights thereafter. Still capable of high performance but any air of invincibility was shot.

I might be too optimistic but Mollie is looking like a future force to be reckoned with.

50m free – She was 0.03 off the FINA A cut at trials with a 24.80, and only 0.4 off her short course PB. She hasn’t swum this event since, but given her improvement in other events I’m sure she could do better.

She’s only just turned 17 in April, so I think she has the potential to see massive improvements in coming years. Maybe more a 200/100 swimmer, then a 100/200 swimmer. While Meg Harris is going to be 50/100 swimmer.
Only worry with Harris, she was on the 4X100 relay Gold & has already experienced that, while Mollie will be more hungry, maybe, maybe not.

Will be interesting to see how both Harris and O’Callaghan track over the next couple of years and whether they continue to move forward or whether we see them plateau. Or whether we see uneven progression across their events. I can certainly see O’Callaghan making a push for the 2nd 100back spot given she is already sub59.

In both Harris and O’Callaghan’s cases, it should be to their benefit that they will not be made to wear the burden/attention of being the main AUS hope in any of these events …. at least until the next major level intl meet plays out.

O’Callaghan will have the 200FR/100BK double to contend with if she continues on the same path.

I think the likes of Larkin & McEvoy will slink off quietly into retirement given their Tokyo outings. C2’s shoulders are “shot” so I would expect its curtains for her. Last hurrah for Morgan; will be interesting to see whether Horton, McLoughlin will continue or cash it in.

ISL and next year’s CG may well keep some, like C1 & maybe Seebohm, in until then. It’s then that we may see some make those calls. Some may, indeed, be made for them if we see their road to continued selection threatened, and indeed cut-off, by the generation now coming through.

Suspect this will especially be the case for Seebohm. C1 could still have the avenue of relays dependent on… Read more »

I do agree on McEvoy Morgan and Horton .. sorry to say but they have become passengers on the Aussie team … Horton has been “training” the entire season and never really peaked for any meet at all so not sure what’s happened to him … Elijah winnington also didn’t perform to expectations .. at least McLoughlin salvaged a silver in the 400m and nearly stole gold as well

Reckon most will hang on until after comm games

I would like a Spanish inquisition on Cam McEvoy, how did he drop so quickly? Was it form, training, other interests?
Larkin & Horton, though not near their best, at least at trails or other meets this year, showed they weren’t far away.
McEvoy just never got close.

Agree- but he somehow managed to be picked for the individual 50m and 100m!

His reputation precedes him.. meanwhile young ones like Mollie Sam and Lizzy have to beg and plead to get a swim at the Olympics especially Mollie in 4×200 finals

Essentially both were via default. 50 due to there being no qualifier and he won Trials. 100 via Temple stepping aside thus passing it on to the next finisher.

Probably no one set thing but rather a number of interconnecting ones. He’s clearly a highly intelligent young man but academic intelligence does not necessarily equate to street smarts. Did he start to “overthink” things leading to a degree of ‘paralysis by analysis’ ? With Rio, being part of a team that was mostly misfiring probably added further pressure as was the cases with C1. In short, I suspect he came to doubt himself and has never quite been able to extricate himself from that hole.

Just my hypothesis ……. and I could be very very wrong.

Why are he & Cate not given the Simone Biles accolades ? Tears of Joy , You failed but you are the best . It was YOUR Olympics!!!Everyone clap for the GOAT. Go Girl . You are us all .We are you !!

Choking is the new winning. So everyone get off Cam& Cate’s cloud . They were innovators !

Thanks, just haven’t heard anything about it.
That swim in 2016 Olympic trials 57.04 was mind boggling.

Regrettably, that proved to be a case of “that one perfect race” rather than something he could replicate or at least come near to again.

Out of interest, do we have a list (or story) about who haas retired after Tokyo? I have seen very few retirements,and none confirmed from Australia, not even CCampell or Seebohm!

Pelligrini, I think? Or after the ISL season?

pellegrini: I’m retiring. if I do make a comeback, I won’t be swimming the 200 free

She’s kind of like those shops that are always having a closing down sale but never close.

The list is very short so far, if we’re limiting it to just Olympians.

I think lots of swimmers have figured out that they can cash out a little longer by “not retiring,” even if they’re not really training the same as they were before. I think still more will retire after ISL. And I also think there is a contingent that sees an opportunity with just 3 years to Paris to maybe grind it out more than they would with a full quad.

Agree this upcoming ISL will be seen by some as a potential opportunity for some additional pre-retirement $$$. Some will make the call there and then, others will survey the situation both with regards to their wider lives as a whole and where they stand with regards to futures in the sport/future national selection.

There may be some swimmers that stick around for isl then they might call quits. However I’m not sure about Seebohm cause she did say she hasn’t ruled out Paris in a post race interview

I adore Cate, but I’m honestly not sure if she would qualify individually for Paris. If Emma keeps her form up, then all it would take is one of the young guns (and we have quite a few young female freestylers who are rapidly improving) to step up.

Obviously I hope Cate does whatever makes her happy, but this Olympics being her fourth and most successful does make it seem like a beautiful end to her Olympic career.

I think Cate is fully aware of that and would be perfectly content being a relay only swimmer.

I hope to see her in Paris.

Yes I suppose you’re right. Narratively it feel right for her to “go out on a high” but obviously she knows what’s best for her better than I do!

One area I hope she improves is her relay reaction time. I expect her to bring that 0.04 down to a flat 0.00.

That made me laugh out loud

She should trademark .04. That was a veteran move. Brilliantly executed.

or play it even more dangerously and consistently hit -0.03

I feel like her swimming career is in a very good place and she is purely enjoying the sport. She’s a legend no matter what happens from here