Aussie Leisel Jones Releases Book On Her Battle With Depression 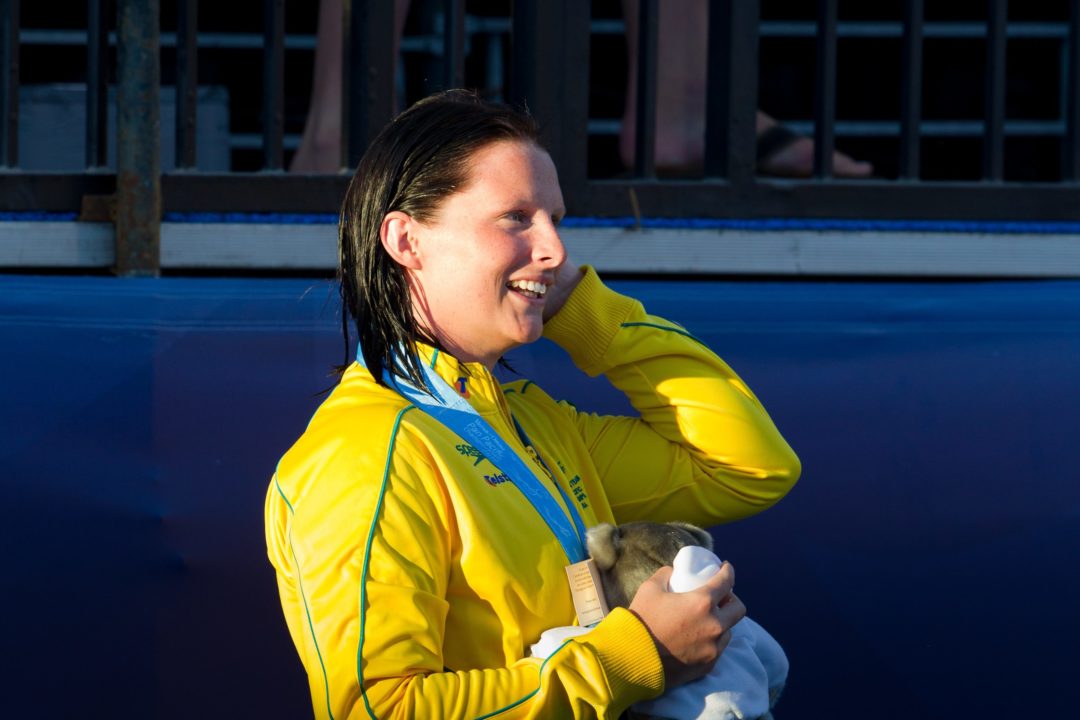 Now-retired Australian breaststroking champion, Leisel Jones, shares stories of how she battled depression, thoughts of suicide, even while on top of her game. Archive photo via Tim Binning/TheSwimPictures.com

When one thinks of Australian swimming glory, names such as Michael Klim, Grant Hackett, Kieren Perkins, Susie O’Neill and Leisel Jones come to mind.  Jones, who claimed 3 Olympic golds and numerous Commonwealth Games and World Championships medals over her 12-year career, was just 15 years old when she swam at the 2000 Olympic Games in her home country.  Yet she went on to earn two silver medals that year, followed by gold in both Beijing and London before retiring in 2012. After legendary Ian Thorpe, Jones holds the record for the most Olympic medals won by an Australian swimmer.

But in a new book she just released entitled “Body Lengths”, Jones describes how this journey into the limelight wasn’t always so easy.  In fact, the bubbly-on-the-outside persona was often plagued with feelings of inadequacy, self-loathing and even thoughts of suicide.  “Body Lengths” describes what it was like for her as an athlete to be under constant pressure to be perfect – for her coaches, the media and herself – and what she reveals is quite eye-opening.

In a narrative that parallels that of American Allison Schmitt‘s recent admission of her battle with depression, Jones candidly conveys in the book that, even after all the gold medals and career accolades, she often “lay in bed at night wondering what’s wrong with me.  ‘You’ve done it’, I tell myself.  ‘You’ve won the gold. Achieved your dream. You should be over the moon.’ But, it doesn’t feel at all like I expected.”

After achieving her Olympic dream, Jones says she expected things would be different and life all around would somehow be smoother.  “I thought my friends would like me more, my fiance would love me more. And most stupid of all? I thought I might even like myself.” Jones even gives details on one especially rock bottom moment while on an altitude training trip to Spain in 2011, where the then-26-year-old contemplated killing herself.  As described in the book, “I sit down on the bathroom floor with sleeping tablets and plan how I will steal a paring knife from the hotel kitchen to try to kill myself.”

In an effort to give hope to other athletes and people in general that they can indeed get through despair and tough times, Jones says that releasing the book is the most rewarding thing she’s ever done.  “It’s a non-selfish act, and I feel like I’m giving back and people can take something out of the stories I’ve shared.”  Jones is striving to share positive stories with young people, expressing that life is a roller coaster and not everything runs smoothly, but one can come out on top.

I am privileged to know Leisel and she is one of the nicest people. So giving of her knowledge and love of the sport, and so easy to talk to. I hope nothing but the best for her.

God bless her. I am so glad she is feeling better. Depression is such a terrible thing. Romans 15:13.

Congratulations Leisel Jones on winning a gold medal in life. I nearly died twice with depression and i also in the past wanted to end it.
We all need to accept depression is the silent enemy.
Like you i am prooving you can live a good life.
For everyone else out there connect everyday to family, co workers and all those people you think are loners or different.
One word or action can save a life.
Well Done Leisel keep raising awareness.
Michelle.