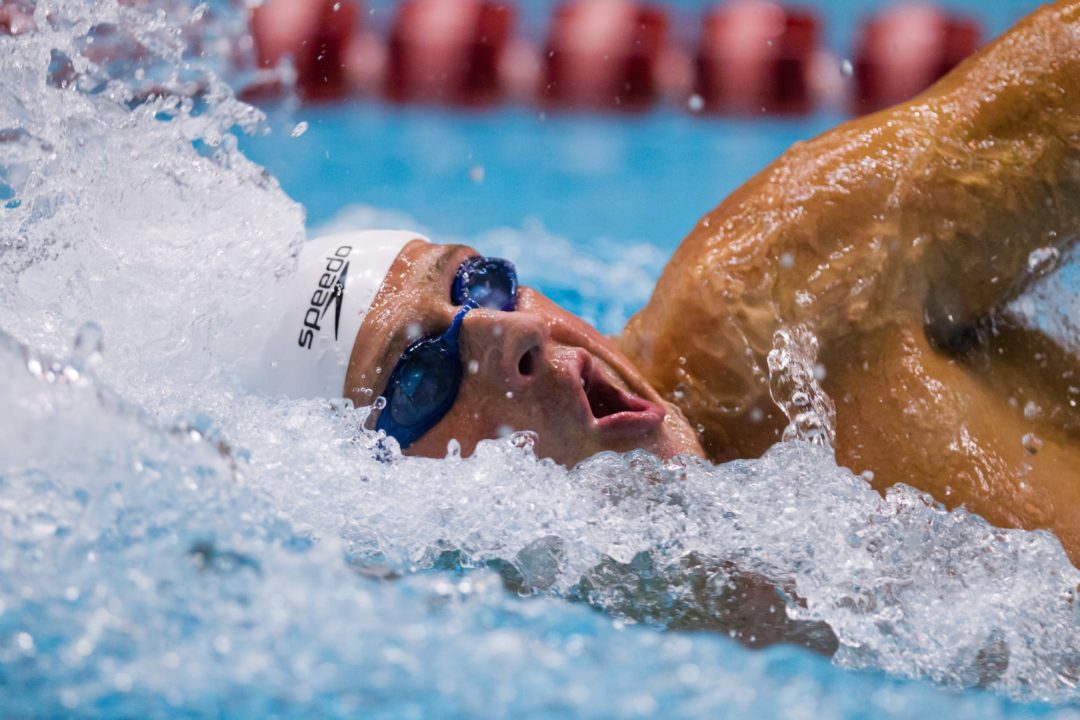 The Manchester Aquatics Centre is once again set to host an elite competition with the inaugural British Swimming Invitation Meet.

Since 2000, 4×100 freestyle relay hype and subsequent upsets seem to go hand-in-hand, creating historic moments that remain branded on our brains.

Gary Hall Jr., entertaining and galvanizing, bringing a boxer’s showmanship to the Olympic stage in Sydney, said Team USA would smash the Aussies like guitars.  Team USA got smashed, particularly by a boyish Ian Thorpe on the final 100 meters, making him a global icon. This marked the first U.S. loss in this event in Olympic history.

South Africa wrote the story in 2004, wining their country’s first gold medal in world record time, 3:13.17. On paper the South Africans were the favorites, but the media hyped Team USA as nearly unbeatable, partly because it was the opening chapter to Phelps’ historic run at 8 medals.  Team USA ultimately netted bronze, another first when the Netherlands’ Peter van den Hoogenband (“Hoogie”), ran down Jason Lezak on the anchor.

Frenchman Alain Bernard set the stage in 2008 with his “we will crush them” (The Americans) smack-talk, inspiring some U.S. club coaches to announce a boycott on French Fries.  Lezak anchored in a 46.0 running down a gorilla-leaden Bernard in the last few meters, a miracle swim many U.S. fans consider the greatest aquatic race in history.

France’s Clement Lefert churned a 47.3, a star swim from a supporting player, teeing up Yannick Agnel’s – soon to be iconic – closer, 46.74.  Those swims were the difference, the reason France claimed it’s first Olympic relay gold

How did this happen again?  Where was the fire-power from Magnussen, The Missile? Were the Aussies overconfident?

We followed the hype over the year, capturing video from US coaches, ’08 Olympic relay mates and even got an insider peek at the Aussie mind-set with Matt Targett.

The Aussies weren’t arrogant, though Magnussen could be brash.  Much of the hype was fan-driven. It was us, we, the swim-nerd horde who love it.

Hindsight being 20-20, it’s easy to play armchair Olympic Coach, but why not? It’s fun.

Here’s a piece of insider gossip. My one-time coach, David Marsh (who put five on the US Olympic Team, including Cullen), felt the 2008 4×100 free relay might not have translated into gold for the U.S. if the French lineup had been shuffled.  “You anchor with Bousquet. Always.”  David wouldn’t say it outright – he’s too much of a gentleman – but if Fred Bousquet had anchored, he wouldn’t have faded. I asked around, and my sources tell me Alain Bernard demanded the anchor leg because it’s the hero leg, for the fastest swimmer. Supposedly, Bousquet and Bernard switched positions the very day of the race for this reason.

What if Michael Phelps had anchored? Could he have gone 46 plus under the gun? What if Phelps had leadoff and Nathan Adrian anchored?  What if Matt Grevers, who is clearly “on” at this competition, had been in the lineup? At night his 47.5 might’ve been shaved to a 47.1, or faster.

What would you do as the US Olympic coach? Who would you have put on the men’s 4×100 free?

I would have used ’08 Lezak, poached Agnel from France, dress Magnussen up in US gear, and dragged Cielo out of his cave. It would have been beautiful. But yeah, really, a half-second victory from France would have only been cut slightly assuming Grevers swam that and went a little faster than prelims.

Definitely would have gone Phelps, Grevers, Jones, Adrian. Lochte just doesn’t have the speed, doesn’t matter if he’s the best swimmer in the world right now. You can’t expect a guy who’s never gone sub 48 to pop a 47. And to leave out Grevers, who split a 47 earlier, seems pretty ridiculous.

Good call! I think this woud have been the ticket!

Eh I guess so. 47.8 was the slowest of the 4 though (Adrian’s was flat). I think with grevers the US go at least .4 seconds faster.

Adrian, get it out front clean water, Grevers, cause of his relay experience at northwestern Jones, and Phelps to anchor, he would have somehow gotten his hand on the wall, Ryan is just not good enough of a 100 freestyler to anchor a relay you knew would be that close

Nobody expected Australia to choke.. that was a close race and will people keep whining about it forever?? If australia did not choke there would not be a race at all..

Yeah, it wasn’t just the Lochte on the relay, it was the relay order as well that bothered me. I certainly would’ve gone with Grevers over Locthe, but I also would’ve changed the order. I don’t know how you don’t put Adrian or Phelps last because both of them could bring home a race if and when it needed it. Probably whichever one you didn’t put last would go first. I wouldn’t have had a problem going Adrian, Jones, Grevers Phelps. That, to me, in my armchair, would have won. Adrian with his 47.8, Jones with his 47.5, Grevers with 47.3, and Phelps with a 46.whatever needed to hold off France.

I think Grevers could have gone in the lineup rather than Lochte, who is awesome in every way but isn’t used to 100freestyle pacing and had two rough 200s earlier in the day. Grevers had two races too, but not the 400IMs yesterday, and has proven he can swim fast under pressure. Would have moved Adrian to the anchor, not being certain in advance that Phelps had such a fast 100 in him after yesterday.