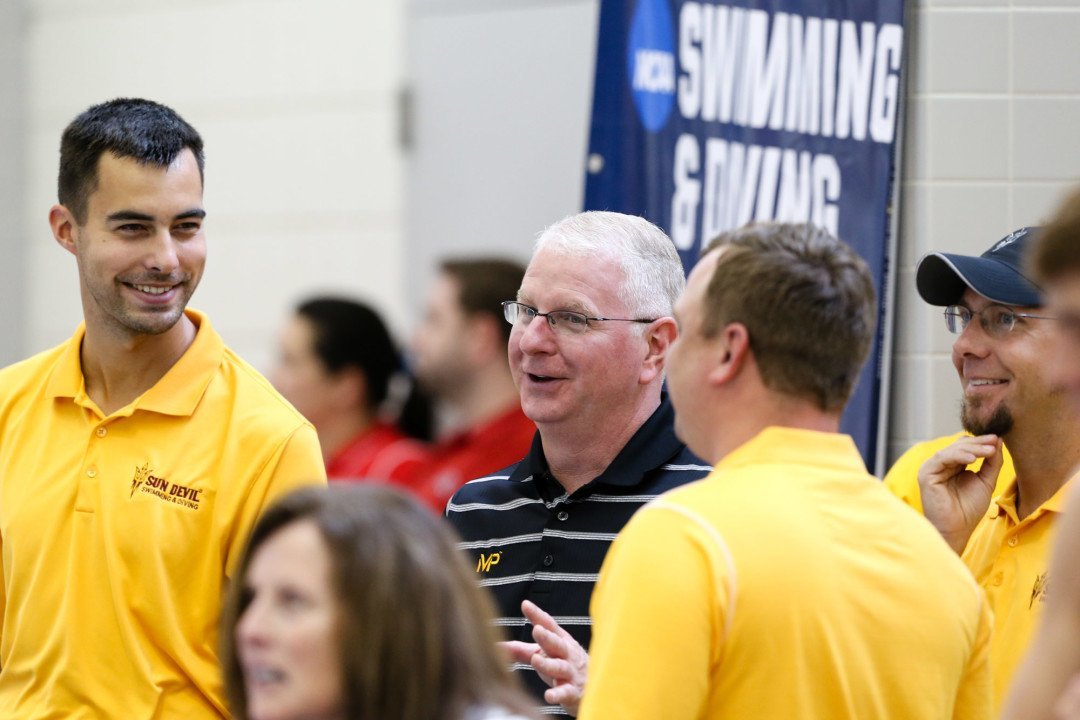 The Bob Bowman-led Arizona State Sun Devils opened their season with a pair of wins over Utah on Friday. Archive photo via Tim Binning/TheSwimPictures.com

The Arizona State Sun Devils got their season rolling on Friday, as they came away from their opener in Utah with a pair of victories. The men defeated the Utes 168-132, while the women did by a score of 159.5-138.5. It’s a good start to Bob Bowman‘s second year as head coach.

The Sun Devils won 8 of 12 events on both sides, powering them to victory. They saw three women and two men record two wins each, with freshman Kendall Dawson and Chloe Isleta doing so in their first ever collegiate meet. Dawson won the 500 and 1000 free, while Isleta took the 100 and 200 back.

The only multiple event winner for Utah was Jack Burton on the men’s side, sweeping the breaststroke events.

Utah got off to a good start going 1-2 in the women’s 200 medley relay, but fell short after that. ASU went on to sweep the remaining three relays 1-2. Utah’s female 400 free relay that would’ve placed 2nd was disqualified.

Both teams return to action on Saturday, with ASU taking on BYU and Utah facing off with Arizona.

SALT LAKE CITY, Utah – After a competitive intrasquad meet two weeks ago, ASU men’s and women’s swimming opened the regular season with similar fire, as the women defeated Utah, 159.9-138.5 and the men emerged on top, 168-132.

“I thought that both teams competed well today after a tough week of training. We still have a long way to go to be the team we want to be, but overall this is a great start to our season,” said head coach Bob Bowman.

Bowman noted that a strong performance in the 4×100 relay helped capture the victory on the women’s side, as the pair of ASU teams on each side finished first and second.

Freshmen Kendall Dawson and Chloe Isleta recorded two wins apiece in their first collegiate competition, Dawson in the 500 and 100-yard free, and Isleta in the 100 and 200-yard back.

“Our senior captains Kat Simonovic and Alysha Bush led the way for the women while on the men’s side, Barkley Perry and Richard Bohus were the standouts. We were very strong in both relays and had a number of successes in terms of racing in the individual events.”

“We will recover tonight and look forward to racing at BYU in the morning.”

The Devils finish their road trip in the state of Utah at BYU on Saturday morning, a meet starting at 11 am(MT)/10 am(AZ).

SALT LAKE CITY- Utah swimming and diving won 13 events tonight but dropped a Pac-12 dual meet to Arizona State this evening at Ute Natatorium. The men’s team was defeated 168-132 and the women’s side fell 159.5-138.5.

“It’s difficult to lose a close meet,” said head coach Joe Dykstra. “The women put up a really good fight against a really good team. It came down to the end and we just couldn’t get the job done on the relays. I am proud of a lot of swims we had on the women’s side. We are pretty dinged up with a lot of nagging injuries and we are short several people so I feel good about moving further into the season.”

“On the men’s side, we came out absolutely flat. We didn’t really get into the groove of the meet until the second half. By then, we had dug ourselves too deep of a hole. I think tomorrow we have to come out with better energy and better execution during the first segment of events. That is what I talked to the team about tonight. There on the end, we were racing really well and putting ourselves into a competitive situation.”

The Utes started the meet by winning the 200 medley relay. The team consisting of Shayla Archer, Stina Colleou, Kristine Pataray and Gillian St. John touched in at 1:43.48 and was closely followed by Megan Kawaguchi, Mckenna Gassaway,Darby Wayner and Jenna Marsh (1:43.95).

On the boards, Josiah Purss took first in both the one-meter and the three-meter events. In the one meter, he came away with a score of 346.13 while in the three meter, he scored 360.23.

The Utes return to the Ute Natatorium tomorrow morning at 10 a.m. to take on Arizona.

This was ASU’s first meet and no one knows what type of training these swimmers had leading up to this meet. The team flew in to Utah on the same day of the meet.

We will definitely see ASU men’s and women’s swimming for individual and relay races at this year’s NCAAs.

what is the altitude of this meet?

Hope it is above 15,000 feet with those times. I am a fan of Coach B but wonder if they will get any men to NCAAs this year?

This was ASU’s first meet and no one knows what type of training these swimmers had leading up to this meet. The team flew in to Utah on the same day of the meet.