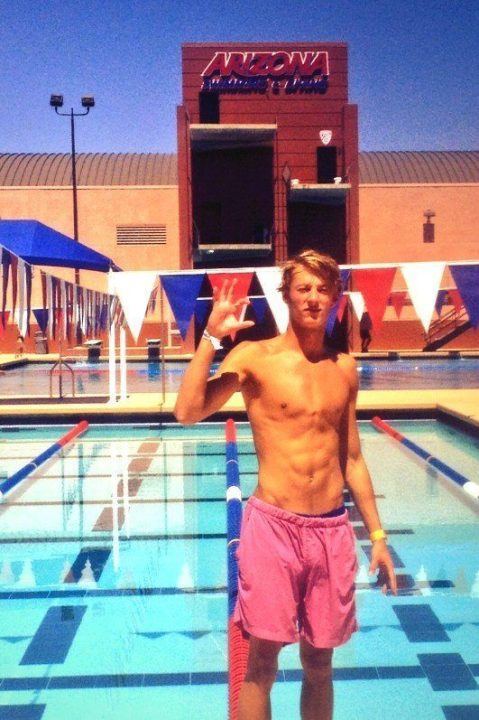 Chatham Dobbs is recovered from double shoulder surgeries and ready to attack his senior year and race his way to Arizona thereafter. Current photo via Chatham Dobbs

The Arizona men have added two more verbal commitments from high school seniors on Wednesday evening, getting pledges from Matt Lujan and Chatham Dobbs. Both swimmers are very good backstrokers, which is an area where Arizona really needs to rebuild depth. They graduated their three fastest 100 and 200 yard backstrokers at the end of last season.

Lujan is a Tucson native who spent the summer training with the Santa Clara Swim Club, and has now returned home to pick up his training with Tucson Ford Dealers Aquatics.

“Being in Tucson and swimming for Ford I’ve seen some amazing athletes come on deck wearing the A on their cap and accomplish something bigger than themselves,” Lujan said. “I can remember when I first started swimming for Ford, I said that I wanted to be a Wildcat someday. Arizona has had tremendous success and I get the chance to be a part of it. I’m completely thankful for all of the opportunities I’ve been given and this is no exception.”

Among the swimmers who joined him in training in Santa Clara this summer was Eric Ress – a member of France’s European Championship team in 2014 and a former NCAA All-American backstroker.

Dobbs, from the Nashville Aquatic Club, adds even better backstroke times to Arizona’s lineup, and is a little bit better in the freestyles too.

Those times are all from his sophomore year, and he’ll hope to regain form as a senior. He had the same surgery on both of his shoulders, one in November and one in February, which cost him the entire 2013-2014 short course and long course seasons.

Dobbs says that he had an incredible surgeon and is feeling great headed into the Tennessee High School season.

Congrats to these young men and Zona.

Any relation to Michael Dobbs, the Peddie School backstroke in the 1980’s?

The one and the same – with another brother (Hudson) right behind in the next few years.