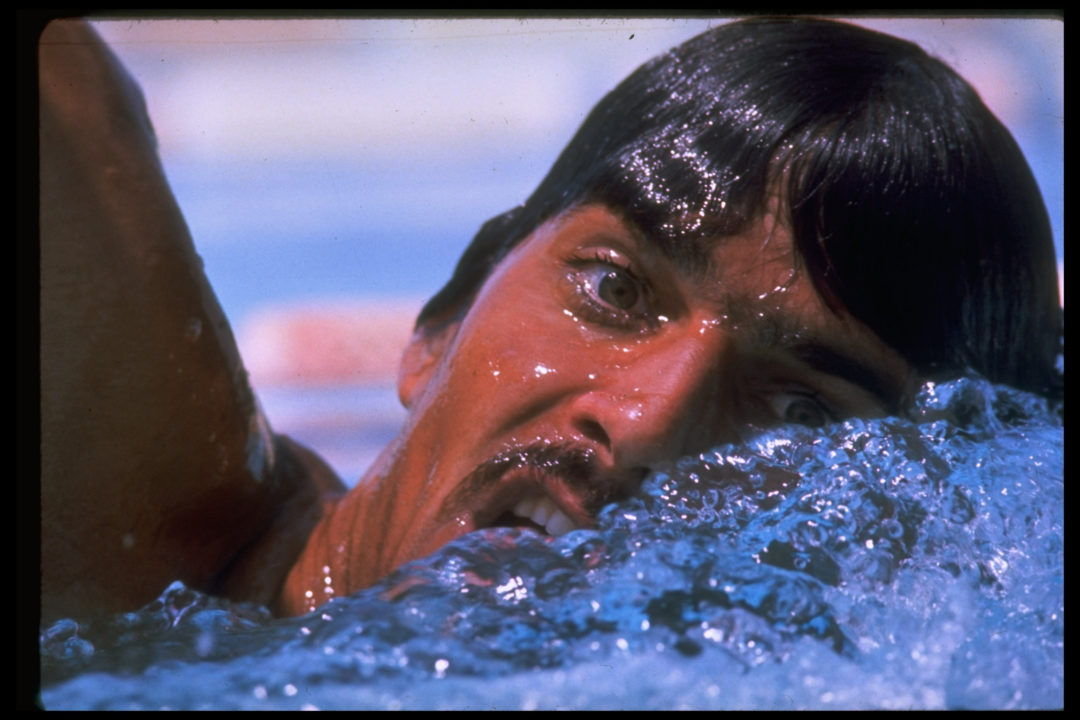 arena has announced the signing of American Olympic hero Mark Spitz as a brand ambassador, 46 years after he first collaborated with the company. Current photo via by Co Rentmeester/The LIFE Picture Collection via Getty Images

arena has announced the signing of American Olympic hero Mark Spitz as a brand ambassador, 46 years after he first collaborated with the company in the pioneering days of sports sponsorship.

Spitz became an iconic figure at the 1972 Olympics in Munich, winning 7 gold medals, all in world record time, and helped to propel the efforts of entrepreneur Horst Dassler as he launched the arena brand in 1973.

In winning all his events in Munich – 100m & 200m freestyle,100m & 200m butterfly, 4x100m & 4x200m freestyle relay, and 4x100m medley relay – Spitz set a record that stood for 36 years until Michael Phelps broke it with 8 gold medals at the 2008 Olympics in Beijing. He remains the second-most decorated Olympian in history (in terms of gold medals: 9) behind Phelps. Back in the 70s, the image of Spitz with his 7 gold medals and his moustache – grown as an act of rebellion in an era when other swimmers were shaving their body hair – transcended him from Olympic hero to cultural icon across the globe.

Spitz proved to be a pioneer not only through his performances in the pool, he was also a trailblazer in athlete sponsorship. Not long after his herculean effort in Munich, at the young age of 22 Spitz retired from swimming – still an amateur sport at the time – in order to become arena’s first sponsored athlete. Subsequently he was joined in the following years by other swimming icons, including Shane Gould, Don Shollander, Shirley Babashoff, and David Wilkie.

“There’s no doubt that swimming has changed since my day back in the 70s,” says Spitz. “It’s more technical, more professional, and the world’s top athletes have to be a lot more conscious of their behavior, since they’re expected to be role models for the younger generations. But there are also some fundamental things that are still the same – what it means to become a champion, what it means to be a leading brand; these are elements of the DNA, and they don’t change. This is where I think we can work really well together, so I’m very excited by our new collaboration. For me, to this day arena is still the best there is.”

Dassler’s recruitment of Spitz and other athletes in the 70s marked the birth of professionalism. Since then, sponsorship is the cornerstone for success in professional swimming, from the individual all the way through to the world’s most successful national federation, USA Swimming, for whom arena is today an official sponsor. Forty years ago, prohibitive sponsorship guidelines, limited resources, and economic realities forced many elite swimmers to retire in the prime of their athletic ability. Today, however, the role of sponsorship has allowed athletic careers to thrive, providing athletes with the appropriate time and resources to dedicate to training and competition.

In addition to being a pioneer in sports marketing, arena’s beginnings marked it as an innovator, and since then it has developed a reputation for being at the vanguard of technological innovation in swimming. The company’s history includes decades of breakthrough products, including the X-Glide in the new millennium – one of Time Magazine’s 50 Best Inventions of 2009 – and most recently the Carbon range of racing suits, which led the field at FINA’s 2019 World Championships in Gwangju, South Korea.

The world of swimming has indeed changed over the past 47 years, and both Mark Spitz and arena played a material hand in initiating the changes that have ultimately brought the sport into the hi-tech, professional era that it finds itself in now. With the 2020 Olympics in Tokyo now firmly in the sights of all aspiring champions, it is somehow fitting that these two icons of the pool will once again be working on the same team.

“We’re very excited by the potential of our new collaboration with Mark,” said arena North America’s General Manager, Mark Pinger. “He’s the first super-Olympian of the post-war era, and he’s also a successful businessman and an accomplished TV presenter and speaker. Then there’s a slightly rebellious side which adds a healthy amount of spice into the mix. We’re looking forward to working with him, exploring ideas together, and leveraging his cachet to bring arena to the front and center of the swimming world’s minds in North America.”

Since 1973, arena has created and marketed waterwear products for competitive swimmers and swimming fans worldwide, and is universally recognized as one of the premium brands of high quality swimwear and equipment. Over the last 45 years, arena has developed strong expertise in creating best-in-class products with particular focus on the pool segment, while also expanding into leisure and beach wear. Today the arena brand has a presence in 116 countries around the globe. In an historic agreement signed in early 2014, arena became a principal sponsor and technical partner of the swimming world’s governing body, FINA (Federation Internationale de Natation). arena sponsors 57 individual athletes and 29 national federations, including USA Swimming, as well as NCAA Division 1 swimming programs for Stanford, University of Texas (Women), Auburn, NC State, and University of Virginia.