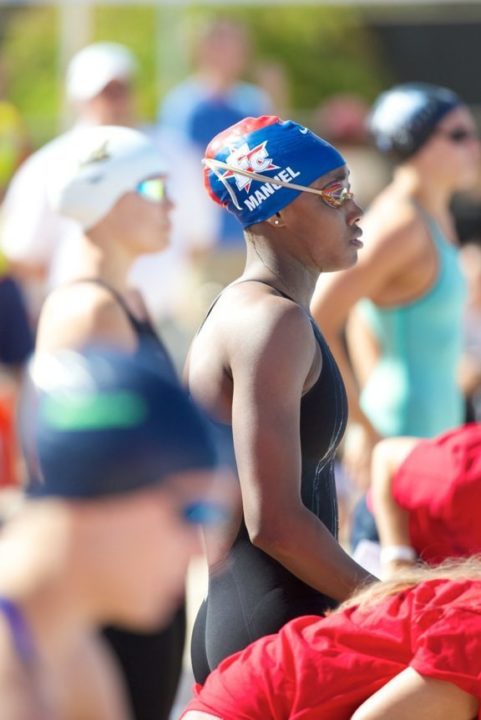 Simone Manuel will be graduating high school and moving on from the First Colony Swim Team this summer; her coach, Allison Beebe, will move on as well. Archive photo via Rafael Domeyko, rafaeldomeyko.com

Allison Beebe, the head coach of the First Colony Swim Team in Sugar Land, Texas, has announced that she will resign effective the end of the 2014 long course season. She told the team’s membership of the move in an email on Thursday, and confirmed to SwimSwam on Friday morning.

“I’m going to be coaching the Santa Clara Swim Club with coach John Bitter,” Beebe said of her future plans. “I’m still very invested in the team here, and I want my swimmers to have their best seasons this summer.”

“It’s definitely a bittersweet event. I love the program [at First Colony], and it was a very difficult decision. [the departure] was very amicable…I love the families here, they’re very important to me.”

When Beebe began with the program 9 years ago, it didn’t have a single swimmer qualified for NCSA Junior Nationals. In under a decade, Beebe and her staff have turned the team into a USA Swimming Club Excellence program “silver medal club,” meaning that it is ranked as one of the top 100 clubs in the country.

The best-known swimmer to come out of the program in Beebe’s tenure is high school senior and Stanford commit Simone Manuel. In 2013, Manuel swam to a 7th-place finish in the 50 meter freestyle at the World Championships in Barcelona, Spain and earned a gold medal as a prelims-only swimmer on the 400 free relay. Both came just past her 17th birthday.

Manuel, who will be wrapping up her time with FCST just as Beebe is this summer, also holds 5 National Age Group Records in the 15-16 and 17-18 age groups.

While Manuel is the best swimmer to come out of the club in the last 9 years, she’s not the only successful one to do so. The program has become a hotbed for Division I talent. Names that stand out are Maddie Locus at Georgia, Skylar Smith at Texas, Eegan Groome at Missouri, and Romy Landeck at Texas A&M.

Prior to her time at First Colony, Beebe was the Head Age Group Coach at the City of Mobile Swim Association, where she was voted the Southeastern Age Group Coach of the Year in 2004 and 2005.

The Santa Clara Swim Club is located just a short 17-mile drive from Stanford University: the future home of the aforementioned Manuel.

Congratulations to Allison. Before she leaves, I would love to have Allison share some thoughts regarding the training she has done with Simone. I think it would be interesting for a lot of people to hear.

Allison is a class act and proud to say a good friend… she has done a remarkable job at first colony (not only with simone, but with the team and the swimming community as a whole).

What position/role/title will Allison be assuming at SCSC?